Jordan Walker has had dreams about playing in Busch Stadium. He's currently one of the most hyped prospects in baseball, and for good reason. Let's get to know him 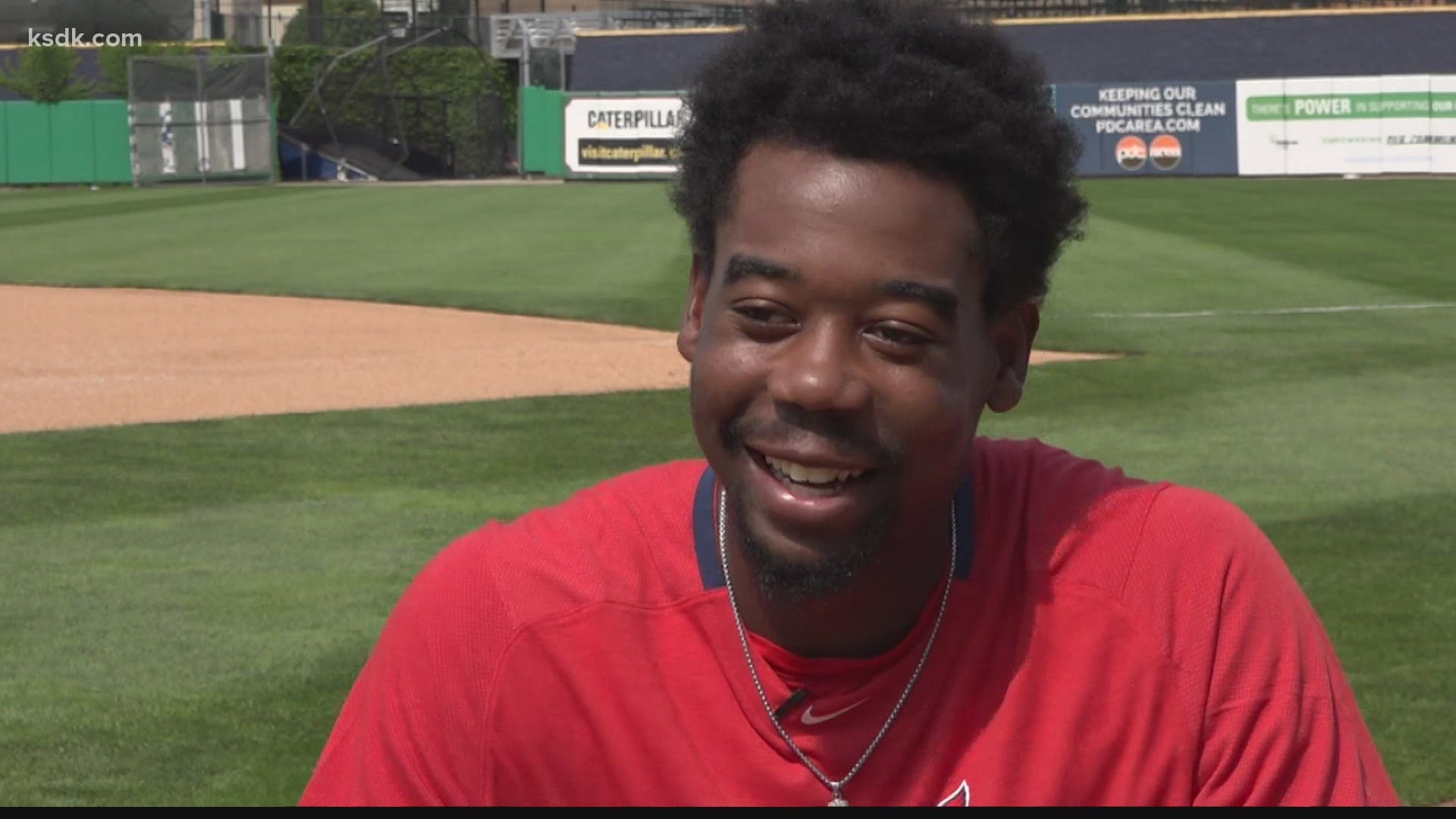 The Cardinals' 2020 first-round pick out of high school in Georgia may still be just 19, but the third baseman dwarfs even the most impressive athletes. Being 6-foot-5 and weighing 240 pounds will do that.

But after talking with Walker for just a few minutes it's apparent this intimidating physical specimen has about the most easy-going disposition of any athlete you could meet. And no, the size hasn't always been there.

"Growth spurt," Walker said. "My friends used to always get on me because my little sister used to be taller than me. And they were always getting on me calling me 'Shorty' and stuff like that. But I hit a growth spurt around ninth or tenth grade and now I'm the tallest one in my family."

Walker's love for baseball began long before he hit .374 with six home runs in his first 27 professional games (including a bomb in his first-ever pro at-bat) at Palm Beach earlier this year.

At just 2 years old, Walker became enamored with baseball after hanging around a tee-ball league his grandfather ran. He grew to love the game so much, he even slept with his glove and his bat. That love continued to grow as his skills developed.

When Walker was taken by the Cardinals with the 21st overall pick of the 2020 MLB Draft, he also loved the situation he was walking into as a professional.

"What I first thought about them (the Cardinals) is they win. They're winners," Walker said. "I like winning, and this is the perfect organization to be in if you want to be a winner, if you want to produce as a player. I pretty much love everything about them."

And now, Walker is sharing an organization with a third baseman he grew up admiring; Nolan Arenado.

"He (Arenado) is the ideal third baseman that I want to be and strive to be," Walker said. "When there is a pitcher on the mound with Nolan Arenado behind him they don't have to worry about a ground ball hit to third base, because they know he's going to make the play. That's what I want to be. He's just an idol, man."

So far in his minor league career at the plate, Walker is looking like Nolan Arenado.

His gaudy 1.162 OPS at Palm Beach caught the attention of the Cardinals, who have already moved him up to High A ball in Peoria. And the better the competition, the more Walker wants a piece of them.

"I've always loved playing tough competition. Whether it's hard-throwers or people who throw to spots. It's just been my thing," Walker said. "I always thought that playing in high school wasn't the best competition. I always thought that playing kids who didn't throw hard or very accurately didn't really do anything for me. I'm always looking to get better. So this (Peoria) is the perfect setting. Low A was the perfect start for me because it introduced me to how professional baseball would be. Sometimes it's 97 on the corner, sometimes it's 97 at your face. So I've got to learn and adjust."

And speaking of tough competition, Walker got his chance against the best pitching in the world down at Palm Bach, where he faced New York Mets starter Jacob deGrom on a rehab assignment. It was a four-pitch strikeout, but Walker took quite a bit from the experience.

"It really got me thinking like, 'This is what I need to do to get to the MLB'. That is my goal. To get to the MLB," Walker said of facing deGrom. "It was a really good experience for me, I was pretty excited. I wanted one more AB against him, but we didn't quite get that far."

So far, the power has come easy for Walker, but he's concentrating just as much as making himself an asset on defense as well. And he's taking cues from the Cardinals' defensive master, Jose Oquendo. Oquendo is helping instruct throughout the Cardinals' minor league system, and spent a good deal of time with Walker at the Springfield alternate camp in 2020.

"Mind-blowing. I thought I was good at defense before, but he showed me plenty of other ways to be more consistent," Walker said of Oquendo. "I trust him with any part of the game. It's not just fielding. He's giving me tips on baserunning, hitting and approach and things like that. Mainly fielding, though. He's shown me how to position my feet... and not just mechanics of fielding either. He's shown me different situations I should be thinking about, where I should be on the cut off if it's hit to left field and knowing the outfielders' arms and things like that. So just the whole aspect of the game. It's so cool to see how much knowledge he can share with you and I'm excited to see what else he can share with me."

While Walker is confident in his abilities, he also has the ability to stay within himself, which can be hard when you're compared to two of the best prospects in the history of the franchise. Which is exactly what Cardinals President of Baseball Operations John Mozeliak did when he threw Walker in with Albert Pujols and the late Oscar Taveras as the most impressive players he's seen at that young of an age.

"I try not to worry too much about that stuff of being compared to other people and things. I'm trying to focus and be my own player, but who can't say that's pretty cool," Walker said.

But even though he's only at High A and likely has quite a while to go before we see him in St. Louis, that doesn't mean Walker hasn't dreamed about playing for the big club at Busch Stadium.

"Plenty of times before I go to sleep," Walker said about thinking about being a Cardinal. "A dream is a dream, so I can dream. I've actually had a couple of dreams about it before. Hitting a home run there in a big league game, but like who hasn't? What kid hasn't? I've visualized it, the feel, facing some of the big arms and stuff like that. I'm pretty excited to try and get there."

And when asked if there's one thing he'd like fans to know about him, Walker echoed his grounded mindset.

"I'm laid back. I'm going to work hard to try and get what I want and I'm going to control what I can control," Walker said. "I'm pretty laid back. It's nothing to worry over if I'm putting in the work, hopefully the results will show."