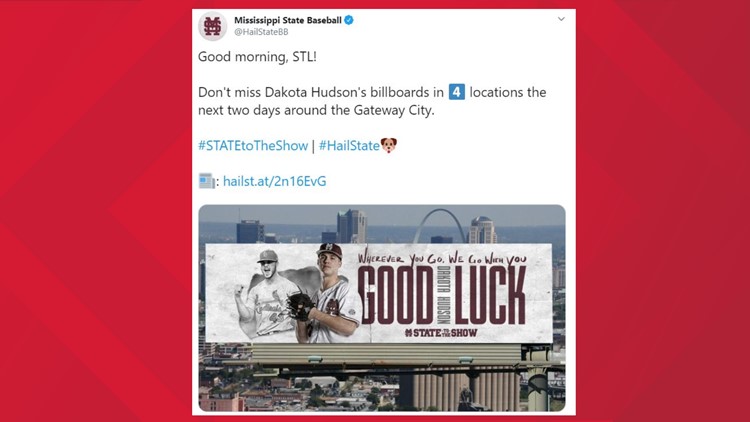 ST. LOUIS — The Cardinals' projected Game 4 starter in the NLDS is getting some extra support before his playoff debut.

Dakota Hudson's alma mater of Mississippi State has put up four billboards in St. Louis this week, in support of the former bulldog and current Cardinal.

Mississippi State said the billboards can be seen at:

Watch: Dakota Hudson talks ahead of Game 4 start in NLDS

For Hudson, all the support from his University has been cool to see.

"They reached out... they did it for (Brandon) Woodruff and it's exciting to have such support from a program that did a lot for me," Hudson said.

Hudson said he hasn't seen any of the billboards in person yet, but he's seen them on social media.

Cardinals manager Mike Shildt said Hudson will start Game 4 against the Braves in the NLDS on Monday in St. Louis.

This will be the rookie's first appearance in the postseason, but he did warm up in the bullpen earlier in the series in Atlanta.

RELATED: Braves shut out Cardinals, beat Flaherty, to pull even in Division Series