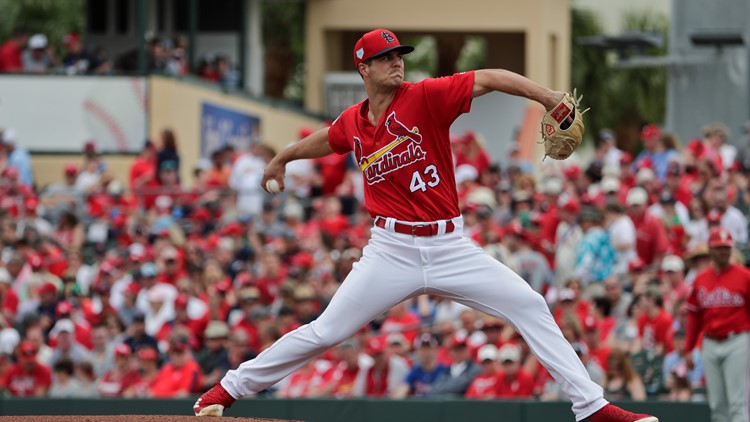 He turned in another scoreless outing on Monday, allowing just four hits in five innings against the Phillies while striking out eight. Four of his strikeouts came with a runner on third base.

In his three starts this spring, Hudson has allowed only one run in 12 innings while striking out 14. Including his first two spring appearances, as a reliever, Hudson has a 1.72 ERA.

The Cardinals have only said the competition to replace Carlos Martinez in the rotation to open the season is down to Hudson and John Gant, who has one more start scheduled this spring, on Friday.

High: Paul Goldschmidt hit his first home run for the Cardinals, a two-run shot in the fifth inning.

Low: Four players who were in Monday’s lineup and expected to be in the regular lineup this season – Paul DeJong, Marcell Ozuna, Yadier Molina and Harrison Bader – all have averages under .190 for the spring.

At the plate: Tyler O’Neill also homered for the Cardinals, his fifth of the spring, a solo shot in the second inning … Both DeJong and Ozuna were 2-of-4, with DeJong recording the other RBI … Ozuna had just three hits for the spring coming into Monday’s game.

Off the field: The Cardinals said Brett Cecil will open the season on the injured list because of “arm issues.” … Manager Mike Shildt also said Jedd Gyorko’s spot on the opening-day roster is “in jeopardy” because of his slow recovery from a calf injury. He is expected to remain in Florida next week  … Both Jack Flaherty and Miles Mikolas pitched six innings in minor-league games on Monday … Former Cardinal Mitch Harris visited camp on Monday. He is now a financial planner in the Atlanta area.

Up next: The Cardinals have their second day off of the spring on Tuesday, then play five more games beginning Wednesday before breaking camp and heading north to prepare to open the regular season.

RELATED: Buffa: Why it's time for the Brett Cecil experiment to end in St. Louis

RELATED: The five most impressive Cardinals so far in spring training

RELATED: Decision on Martinez's role for Cardinals likely won't be made for a least two weeks