They're two of the most influential sports figures in all of St. Louis. And we got them together for a memorable conversation 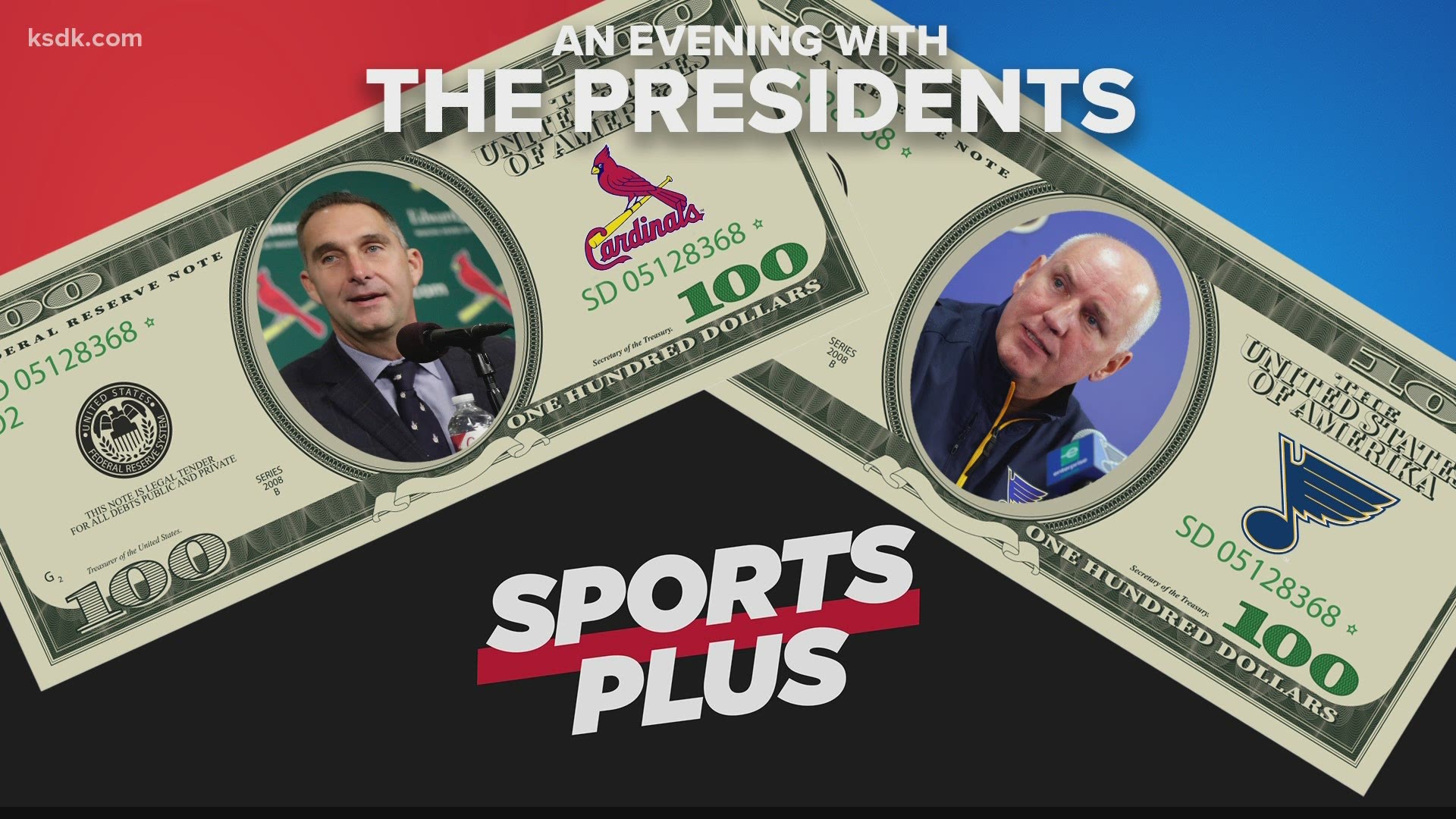 ST. LOUIS — They're two of the most influential sports figures in St. Louis sports. And now they're together on Sports Plus.

The two chatted about their respect for each others' franchises, fan expectations and which deals emotionally drained them the most.

Here's a taste of the conversation:

Mozeliak and Armstrong both said they watch each other's process, trying to emulate successes the other has.

"I visited him (Mozeliak) early when I first got here to find out obviously about the Cardinal way," Armstrong said. "I think they've been a storied franchise in not just baseball but all of sports. We try and pick up tidbits on what's made them successful. They've made longstanding relationships with a lot of players and that's something you want to try and build... in a midwestern market. And there's values the Cardinals have that we're trying to implement in the Blues organization."

The two also have a similar confidant when it comes to talking over some big moves from time to time. Their sons.

"My 16-year-old son definitely did (know about the Nolan Arenado trade). I was actually feeling more stress from him to push this over the goal line than maybe other places," Mozeliak said. "When we were down on our break before Christmas he was actually in the room when I was discussing it with the Rockies so that's when he first caught wind of it. So every night he was like, 'Where are you on this?' And I said, 'I'm nowhere on it. I'll tell you when you need to know.' But he asked me that all the time."

"A little bit like John my son is a hockey fan. He played a little bit and he likes to be a fly on the wall when we're talking. And it's actually something nice to share with him," Armstrong said. "But as John can probably attest to there's sometimes though when you just don't want to talk about it and I feel bad sometimes when you snap and say, 'Not now. I got to mull it over in my own mind before I share it with you.' But It is something I find nice to share with my son because he has the same passion."

As the leading decision men for their respective teams, both Mozeliak and Armstrong get a lot of grief from fans. But how do they see their roles when it comes to satisfying a fan base?

"I do read quite a bit, social media things just to get a feel of what's going on. But not to be guided by it. I think it was Marv Levy who said, 'Once you start listening to fans you'll soon be one'. So you have to do what you think is right," Armstrong said. "You like to have an understanding of how your fanbase is feeling, but you can't really react to it because there are so many things going on behind the scenes. Like I look back to we had a successful season a few years ago losing in the semifinals, and then we let Elliott go. Fans weren't happy about that but that's turned into Jordan Kyrou. So you have to have a little vision that goes past the here and now. And you want fans to live in the here and now. No one's gonna buy a ticket, when they can, and say, 'Geez I hope we're good in four years'. They want to see a competitive team on a nightly basis."

"Obviously both Doug and I want to go out and sign the highest-paid free agents every year and make huge trades and look back and say, 'We did exactly what people asked for'. But that's not how Midwest market teams can operate. We have to make smart decisions to help us in the short term but also understand the long term, too. So balancing that in our decision making is exactly what we have to do, and sometimes that's not the most popular," Mozeliak said. "But fans have to realize we also have to answer to people, too. So ultimately we're trying to balance what we think will get fans exciting, generate ticket sales and momentum for success, but also make sure we're balancing the books as well."

And when it comes to the most emotionally-taxing transactions for each executive in their careers? Armstrong pointed to losing Alex Pietrangelo. Mozeliak chose Albert Pujols' departure, Matt Holliday's extension and the intricate Arenado deal.