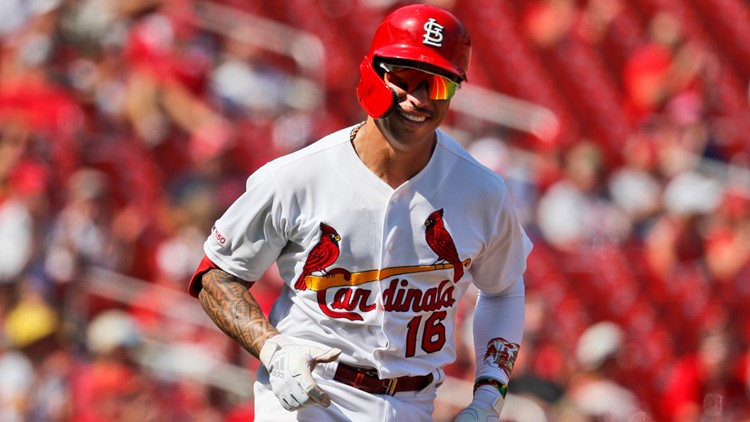 Photo by: AP
St. Louis Cardinals' Kolten Wong smiles after hitting a single during the sixth inning of a baseball game against the Washington Nationals Wednesday, Sept. 18, 2019, in St. Louis. (AP Photo/Jeff Roberson)

Kolten Wong showed us exactly what he can be in 2019

ST. LOUIS — Kolten Wong has never been short on two things. Ability and confidence. Now, eight years after he was drafted by the Cardinals, it's all come together.

Kolten Wong showed us exactly what he can be in 2019.

For years, Cardinals fans had been hearing about this second baseman out of Hawaii who would eventually bring some stability to a position where the Cardinals hadn't had a consistent starter since the beginning of the new millennium.

Then he was here, and our first memory of him was getting picked off to end Game 4 of the 2013 World Series. Not great.

It's safe to say that Kolten Wong isn't close to the guy we're seeing today.

Over those six years Wong has refined his game, dialed in on what he's best at and finally found what he wanted most. Consistent playing time.

It's no secret Wong and former manager Mike Matheny didn't always meet eye to eye. During his tenure in St. Louis, Matheny was quick to bail on younger players like Wong and turn to veterans instead. Wong only appeared in 500 plate appearances more once with Matheny at the helm.

We've seen a different Kolten Wong since Mike Shildt took over, and it's something Wong hasn't been shy about sharing.

"It's amazing to me. I just wanted a chance to play every day," Wong said after the Cardinals won the National League Central. "I'm not going to be the hero every day but I'm going to bring something to the table every day and Shildt believed in that and gave me the opportunity."

The result of that opportunity was a complete performance from the 29-year-old in 2019.

Wong had career highs in batting average and slugging percentage in 2019. Mostly hitting low in the order until later in the year, he managed 11 home runs and 59 RBI. He had a career high 47 walks and 24 stolen bases. And of course he showed off defensive flair and dependability once again.

This is the guy we've been waiting for, but had only seen flashes of in the past, and he finally did it for a full season.

We could tell the last few years that his defense was ascending to an elite level, and in 2019 it was still the cornerstone of his game.

His 14 defensive runs saved and 5.2 ultimate zone rating (UZR) led all second basemen this past season, and he routinely gave us plays like this.

It resulted in his first Rawlings Gold Glove Award at second base, and it was no accident. Wong put that goal at the top of his list before this season even began.

"It was a good eye opening experience for me to see I was one of the top three, but it definitely lit a fire under me that I want to be number one," Wong told us during spring training in 2019 after falling just short of the award in 2018.

Like I said, Wong's stock is soaring right now, he's entering the last year of his deal (with a team option for  and the Cardinals have Swiss Army Knife Tommy Edman ready for more at-bats. Would the Cardinals really listen on Wong this offseason?

Perhaps. Or perhaps the Cardinals keep him under the guidance of Shildt and let him grow some more.

Either way, Wong showed us what he can be this season. An elite defensive second baseman who can beat you with his bat, and if you're not careful, his power and speed as well.

RELATED: The Cardinals biggest off-season priority is improving offense, the question is how to do it