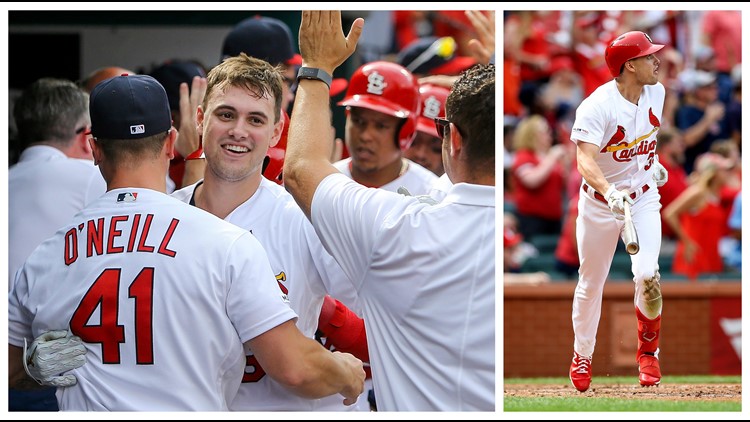 With the Cardinals struggling to find production from their outfielders to the point where infielder Tommy Edman had started four times in right field in the last week, there was a frequent reaction from the team’s fans.

Why isn’t Lane Thomas getting a chance to play?

He finally got that chance on Sunday and certainly made the most of it. Thomas, making only his second start in the majors and first since April 24, hit a grand slam and tripled in another run and his five RBIs helped the Cardinals rally to complete a sweep of the three-game series against the Pirates at Busch Stadium.

The Cardinals trailed 8-4 going into the seventh inning, but two hits and two hit batters drove in one run and left the bases loaded for Thomas, who had two homers on his resume in his first 17 at-bats in the majors.

Since he was called back up from Memphis on July 30, Thomas had played in 10 games, all as either a pinch-hitter or a late-inning defensive replacement, going 2-of-7 with one of those homers.

He drove in his first run of the game with his first career triple in the fourth, which came after he also produced a defensive highlight – throwing out Adam Frazier at the plate in the first inning.

It was the Cardinals’ eighth consecutive win over the Pirates.

At the plate: Paul Goldschmidt and Dexter Fowler also homered. Goldschmidt hit a two-run homer in the first, his 27th of the season, and Fowler – who did not start the game – capped the Cardinals’ scoring with a two-run homer in the eighth … Goldschmidt also had an RBI single in the third, one of his four hits. It was his second four-hit game of the season and he also stole his first base of the year … Edman was back in the leadoff spot and had three hits … In the seventh, Goldschmidt and Ozuna had back-to-back singles with one out and with two outs, Yairo Munoz and Andrew Knizner were hit by pitches in consecutive at-bats, cutting the Pirates lead to 8-5 before Thomas delivered the grand slam. The homer was one of just two hits by the Cardinals in 12 at-bats with runners in scoring position.

On the mound: The beneficiary of the Cardinals’ rally was starter Miles Mikolas, who allowed six runs in five innings, five driven in by Josh Bell with a pair of two-run homers and a single … Junior Fernandez made his major-league debut in relief of Mikolas in the sixth and recorded two strikeouts and also two singles … Both runners scored on a single by Frazier off Tyler Webb, with the runs charged to Fernandez … John Gant got the win, improving to 8-0, while Andrew Miller got the save despite allowing another home run in the ninth.

Key stat: The win was only the second time in 89 games since Busch Stadium 3 opened in 2006 the Cardinals won a game in which they allowed nine or more runs. Their only other win was a 10-9 victory over the Cubs on May 4, 2015 … Overall, the Cardinals before Sunday were 4-58 at home or on the road when allowing nine or more runs, since 2015, with one of the wins the 12-11 comeback win over the Reds on July 19 in Cincinnati.

Worth noting: Jose Martinez had to come out of the game in the fifth inning because of right shoulder discomfort … If he has to go on the injured list, the most likely replacements would be recalling Harrison Bader from Memphis (where he homered twice on Saturday night) or Randy Arozarena.

Looking ahead: After a day off on Monday, the Cardinals will be in Kansas City on Tuesday night to open a quick two-game series against the Royals.

RELATED: Opinion | 5 reasons the Cardinals lost their way in August

RELATED: Opinion | Why Cardinal Nation should keep the faith in Alex Reyes

RELATED: Opinion | The Cardinals' misfires are starting to blow up in their face