My favorite baseball memory: 5 On Your Side sports' Corey Miller's home run catch to remember

With one swing, Paul Goldschmidt sent a home run to the auxiliary press box in Atlanta in Game 1 of the 2019 NLDS. The scramble that ensued makes for quite the story 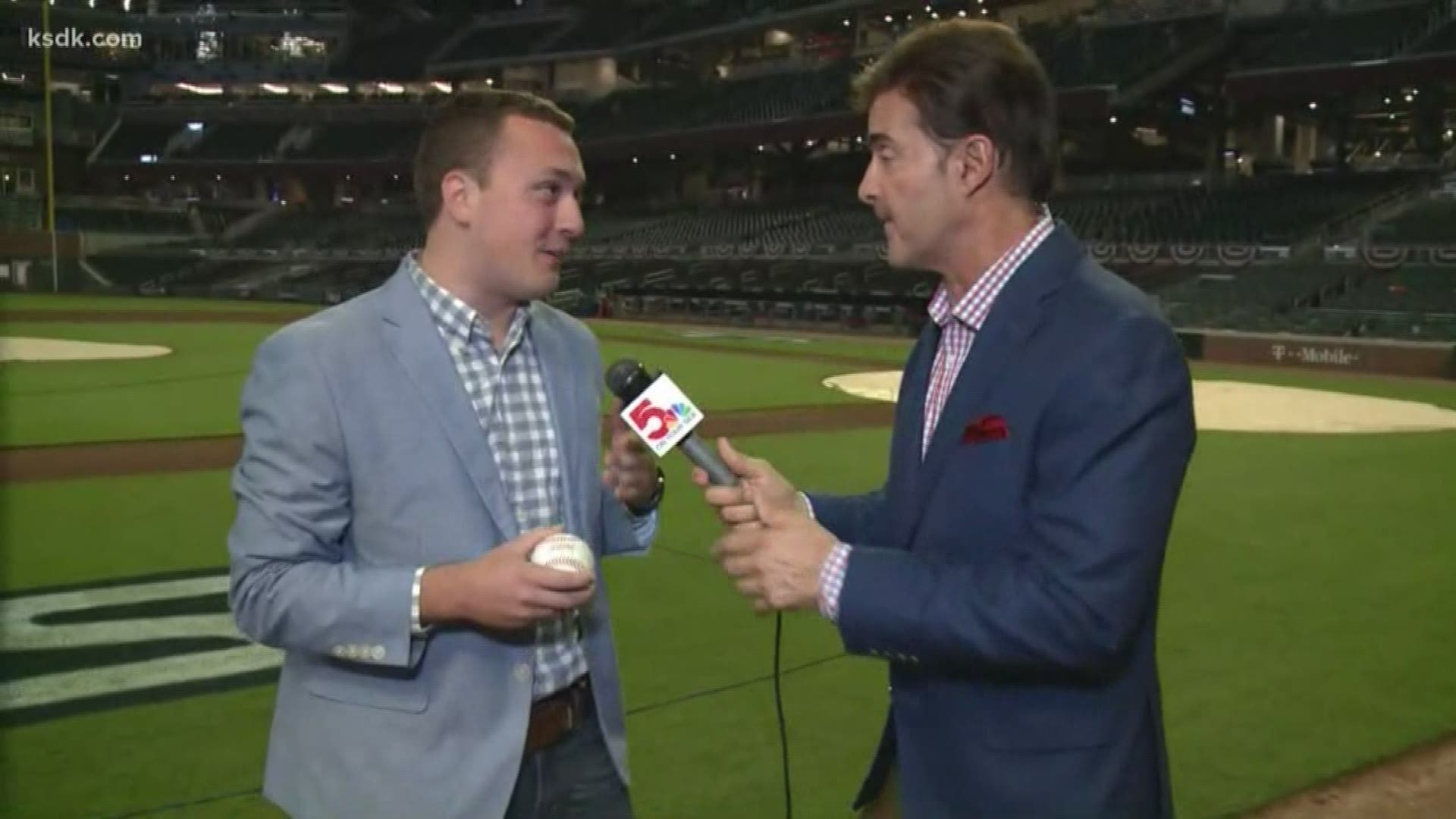 At 5 On Your Side, we're missing baseball like the rest of St. Louis.

So while we're waiting for our national past time to return, let's share some stories of our favorite baseball memories.

Next up... 5 On Your Side sports multiplatform reporter/producer Corey Miller's memorable moment in the 2019 playoffs.

When you grow up in St. Louis (or St. Louis adjacent... I'm from the metro east), baseball is ingrained in your DNA. You don't really have any say about it. That's just the way it is.

I'd bet every person who grew up here has at a minimum one fond memory at least tangentially related to Cardinals baseball.

At just 25, I've already had more than a few cool baseball moments in my life. I've seen every Major League team except Baltimore play in person, I've had a few memorable run-ins with legends out and about (Red Schoendienst was a big fan of peach-picking at Eckerts) and growing up I usually got to at least 10 or 15 Cardinals games a season.

I was at the "rally squirrel" playoff game in 2011, almost saw Michael Wacha throw a no-hitter and some of my first baseball memories involve Mark McGwire home runs.

But things elevated to an entirely different level when I started working for the sports department at 5 On Your Side.

I went full-time into sports in the spring of 2019, just as the Blues made their historic run to the Stanley Cup (I know, what timing, right?!). Since then, it's been one cool experience after another... from the ice in Boston after Game 7 to champagne celebrations in baseball clubhouses. It also allowed me the opportunity to cover the Cardinals, the team I grew up watching on a daily basis back home in Freeburg, Illinois.

The mystique of being in the locker room or press box at Busch still hasn't worn off, and I don't think it ever will.

Interviewing and talking to players and people I grew up watching will never not be cool. Being in the scrum for Albert Pujols' return last season and getting him to chuckle was definitely a career highlight.

But it was what happened on October third of last season that now holds the claim as my favorite baseball memory.

I was in Atlanta for the start of the NLDS against the Braves. Due to the influx of media covering the series, 5 On Your Side sports director Frank Cusumano and myself, along with the rest of the TV media, had been assigned to an auxiliary press box during the game. While most of the media was watching from behind home plate, we were relegated to a converted suite area down the left field line. It felt about a mile away from the action. I was just happy to be in the building.

The game begins, and as it rolls along, it looks like we could be in for some late-game dramatics.

It was unbearably hot at the beginning of the game with the sun shining right on us in the Hank Aaron left field suite. But by the 7th inning, the sun had gone down just enough, that we could sit in the suite's outside area without starting to drip in sweat.

Frank, myself and some other St. Louis media members made our way outside, to a completely empty incredibly nice high bar top area that conjoined with the suite.

The Braves were ahead at the time, and we were joking about if someone could actually hit one to us, since it felt like we were about 5 miles from home plate. We determined there was no way.

Then, Paul Goldschmidt steps in to start the 8th inning for the Cardinals. Before we knew it, he hit a screaming 446-foot line drive that was heading right for Frank's head. I'm not even lying, if Frank hadn't have moved at all it would've hit him square between the eyes.

I think we all turned into little kids in that moment. We knocked over about five chairs and a trash can trying to get into position. Me, knowing the ball was likely coming in at around 100 miles per hour and not wanting to embarrass myself on national television, decided not to attempt a direct catch, and readied for a deflection.

And I got that deflection.

The ball hit off another St. Louis media member's hand, hit the short brick wall behind us and then found it's way right into my hand. I couldn't believe it. I had been going to Cardinals games since I was five years old and had never come close to a foul or home run ball. Now, I had a playoff home run on the road in my hand? Ridiculous.

I'll own the fact it wasn't a true catch. I've been using the word "corral" as a standard description.

Of course, there is a certain decorum to maintain as we were there covering the game as working journalists, so I didn't let my excitement show too much. The Braves fans were pretty hard on me. They didn't know that I was media (or from St. Louis) and were chanting for me to throw the ball back onto the field.

(A slight aside... throwing a home run ball back onto the field is one of the most ridiculous things done at a baseball game. It's obnoxious and embarrassing.)

Things were made even more interesting because there were literally only four of us in our little section. It was completely separate from the rest of the fans. So while they were yelling at me from a distance, I slipped the ball into my pocket and continued about my business.

(Another aside... If you're saying I should've given it to a kid, I get it, but that wasn't going to happen. We were honestly not even in the proximity of any other fans that I could've handed the ball to, and the Braves fans that were within shouting distance just wanted to throw it back on the field.)

Later that night, Frank gave me a cameo on the 10 o'clock sportscast to explain the moment and it all seemed pretty surreal. It still, sort of, does.

Oh yeah, the Cardinals went on to come back and win the game to kick off a very entertaining first-round series. The home run ball is still in a case on my desk at work.

And Paul Goldschmidt, if you're reading this, the ball from your first Cardinals playoff home run is all yours if you do actually want it. If not, it does look pretty good on my desk.

RELATED: My favorite baseball memory: The moment that made Frank Cusumano want to work in sports