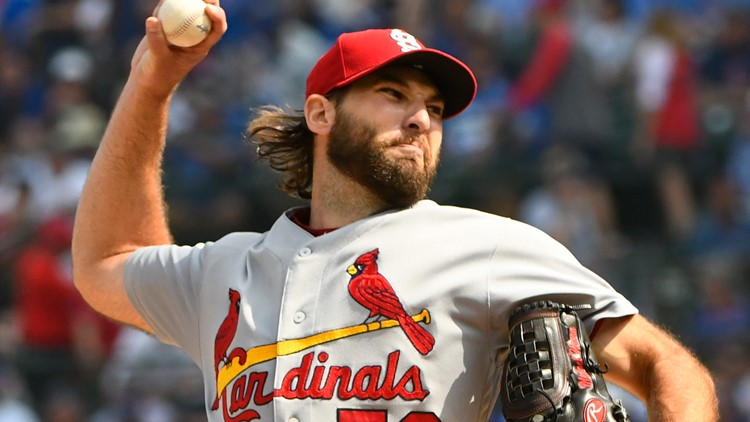 Michael Wacha is a tale of two cities for St. Louis Cardinals' fans.

As the righthanded Texas A&M product prepares to take his talents to the New York Mets on a one-year deal, I thought it was best to look back an enigmatic talent for the Birds.

There is the Wacha who was a dynamic pitcher before the stress reaction injury in his shoulder-and the one after the injury who always seemed to face an uphill battle in reclaiming that initial glory.

Some Cardinals' fans unfortunately only remember the home run served up to Travis Ishikawa of the San Francisco Giants that ended St. Louis' playoff run in 2014. They will forget that it was a chilly-armed Wacha who hadn't pitched in weeks who threw that meatball.

I won't forget the good, and sometimes great, times with Wacha.

He arrived on May 30, 2013, where he promptly hurled seven solid innings against Kansas City. Some pitchers debut and merely try to last five innings without getting shelled.

RELATED: Opinion | When it comes to Dexter Fowler, it's best to keep expectations low

After a detour that sent him back down to the minors, Wacha returned towards the end of the year and turned heads. Wacha's work in September and October of 2013 ranks as some of the best pitching I've seen in my entire 37 years on this planet.

He nearly claimed a no-hitter against the Washington Nationals when a ground ball with eyes from Ryan Zimmermann derailed it in the ninth inning.

Wacha then out-dueled Clayton Kershaw to help the Cardinals advance to the World Series. Wacha made two starts against the Los Angeles Dodgers, going 13.2 innings and striking out 13 batters without allowing a single run.

The following summer, in June, he suffered the scapula injury. The unique ailment was a chronic shoulder condition that is very rare and a huge pain for a pitcher. Only Brandon McCarthy dealt with it before Wacha, so there was never a clear cut route back to Cy Young dominance for the righty.

That doesn't mean Wacha wasn't effective. It was just more inconsistent and without a sure promise of durability. He bounced back in 2015, winning 17 games and posting an ERA/FIP of 3.38/3.72. But over the next two seasons, Wacha's WHIP would balloon up and his ERA followed. While he made 54 starts over the two years, he never seemed to lock into a rhythm or be useful late in the season.

A lack of health cut his 2018 short, but Wacha found his 2015 resourcefulness again. While the FIP was above 4.00, the ERA stayed down to 3.20, and Wacha was dominant at times. The shoulder remained strong, but a knee injury derailed him initially before an oblique strain did his season in.

2019 wasn't a swell time, with Wacha's ERA going on a 2016 diet and getting near 5.00, and he couldn't stay in the rotation. Near the end of the season, the Cardinals were without options and had to insert Wacha into starts. However, in five starts covering the last four weeks of the season, Wacha put up an ERA of 2.70. It was only 16.2 innings, but he helped the Cards in some shape or form.

Wacha didn't appear in the postseason, In fact, Wacha's last postseason work as a starter came in a shellacking against the Chicago Cubs at Wrigley Field in 2015. You could say Wacha's postseason career started in flight, yet crashed in the latter years.

That's Wacha for you. A mixture of sweet and bitter that never met a straight line. It liked to streak and move around, which confused and aggravated Cardinal nation. You knew he had the goods because you saw them once upon a time, but it wasn't easy to locate the greatness.

It wasn't just the injuries. Wacha suffered from a lack of a deep pitching arsenal. He always had an electric changeup and fastball, but the curveball he adopted and developed was never a sure thing. He had a bullpen ready arm that kept trying to be a starter, which produced unflattering results and rarely lasted.

After 2015, Wacha was merely struggling to be a good pitcher for the Cardinals.

It's surprising to look and discover Wacha is only 28 years old. He's a veteran due to experience, but his birth certificate suggests he has some life left in his career as a solid fourth or fifth starter. He won't have it easy in the National League East, but if there's a guy who could pull a rabbit out of a hat, it's Wacha. Every time I thought he was down and a bad bet, he would do something to redeem his legacy.

The former 2012 first round pick will get a helpful reboot and I wish him well.

Wacha, throughout all his struggles, was never a guy to complain or finger point. He took the hits and kept on throwing, hopeful of the next day and the "you never know" atmosphere of the game. It's easy to root for those guys from afar.

Wacha will always be a tale of two cities for Cardinals' fans. The guy before the injury and the guy after it. At least you had the guy before for a little while. On the whole, Wacha's 3.91 overall ERA suggests it wasn't as bad as some think.