Opinion | Mookie Betts would complete the Cardinals, so go ahead and dream about it

While the chances of St. Louis getting him are low, it's okay to imagine Betts in the lineup. After all, it's only November.

November is one of the few months of the year where baseball fans should feel the least amount of stress.

The season is over, the last team is standing, and the trade season isn't exactly underway just yet. It's a time to dream big without being heartbroken, take a breath after a long seven months, and generally not worry about too many things. Don't stress, just impress your imagination.

While it's great to step back and applaud the Washington Nationals, seeing the team that took you down win it all provides an extra moment of introspection. The St. Louis Cardinals have some work to do, and it begins and ends in the outfield.

Unless the team breaks tradition and installs a very young outfielder into a starting position at the beginning of the season-talking about you, Dylan Carlson-they will need to sign a free agent or make trade. Outside of Marcell Ozuna, Corey Dickerson, and Nick Castellanos, there isn't much out there.

Trades are about as hard to talk about as fitted sheets are easy to fold, but let's talk about Mookie Betts for a minute here anyway.

In an article from the esteemed Cardinals writer Rob Rains this week, he put forth eight ideas on how to improve the team. One of them involved trading for Betts, who has one year of arbitration left before becoming a free agent in 2021.

The Boston Red Sox outfielder doesn't need much of an introduction, but I'll still lay it all out. He's a three-time Gold Glover, four-time All-Star, and the American League MVP in 2018 went to his house. Betts compiled a ridiculous 1.078 OPS (.640 slugging percentage) in 2018. He scored 129 runs, smoked 32 home runs, 47 doubles, five triples, and hit .346. A Cardinals' fan couldn't find a single thing to complain about with that season.

Betts came down to Earth, sort of, last season. A slash line of .295/.391/.524 with 135 runs scored and 40 doubles wouldn't be complained about, much less the 29 home runs. He's played at least 135 games in the past five seasons, so he is durable. Betts likes to hit lead-off or second, something the Cardinals desperately need. While he's played the majority of his career in right field, Betts has logged 192 games in center as well.

He hits at Fenway for 81 games out of the season, so can he hit away from Boston? Yes. Betts doesn't do as much damage on the road but owns an .858 OPS away from Fenway. He's hit more home runs away from Boston as well, so he won't have a problem with Green Monster-less ballparks.

In short, Betts is everything the Cardinals need: a lead-off power threat who gets on base, has speed, and plays multiple outfield spots. Oh, and he's a stud, so it's okay to dream about an acquisition.

Listen up, fun destroyers. No one knows what will happen this winter with regards to the Cardinals. Team reporters have no clue and columnists aren't aware. Anything could happen. I'd ask the people who doubt a big move so completely if they saw the Paul Goldschmidt trade coming last year. He put together a 5 WAR season and had one year left on his deal. Cards got him.

It may be true that the team doesn't make a lot of offseason splashes, but that doesn't mean a little Betts dreaming is out of the question. Rains isn't trying to create hot fumes for no reason. He wouldn't write something if it wasn't somewhat of a possibility. There are sources or direct talks, but at this time of the year, thinking outside the box should be mandatory.

In the trade proposal, Rains said the Cardinals would give up Kolten Wong, Carlos Martinez, and Harrison Bader. Three players that are replaceable. Wong is a wizard defensively, but his bat isn't consistent, injuries find him often and he's getting a pay raise soon. Wong has improved a lot the past couple years, but has only played in 148+ games twice in his six full seasons. He's a guy who could give you 3-5 WAR, but that's it. While valuable, he's not irreplaceable. 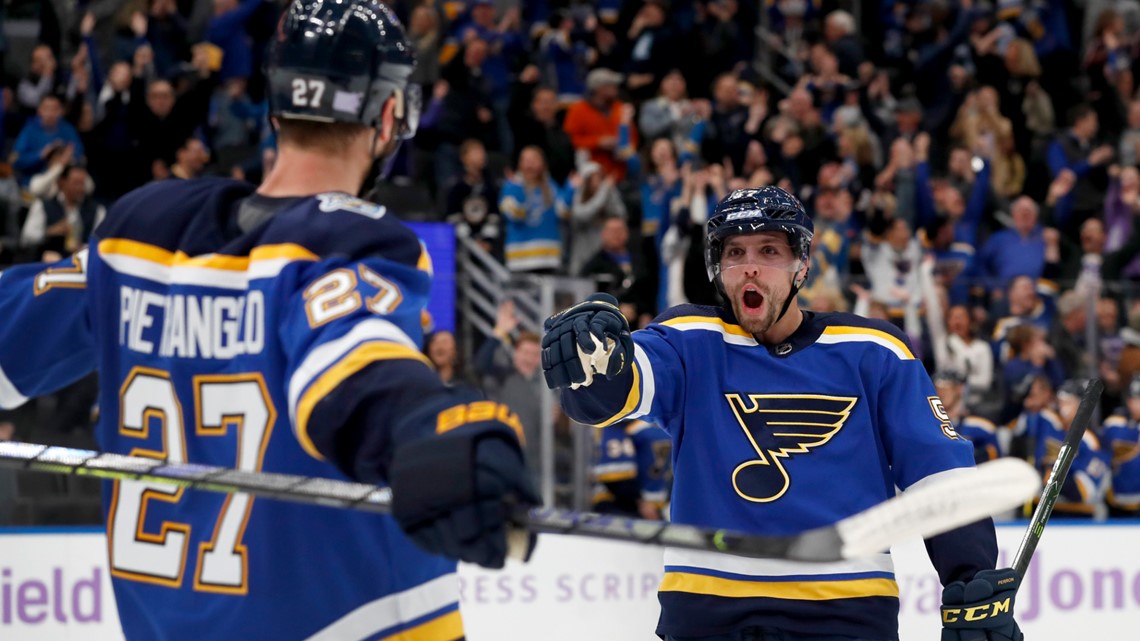 David Perron's wrist shot is part of a winning formula for the Blues
ST. LOUIS - It's the wrist shot that's taking the NHL by storm right now. It's reminding those that follow the Blues just how lethal David Perron's is these days. But then again, there are Blues fans out there that are quite familiar with a lethal wrister from one of the greatest goal scorers there is: Brett Hull.

Like Wong, Martinez is also approaching 30 years of age, and spent parts of the last two seasons in the bullpen, even though he's getting starter money. His mindset and worth ethic have come into question over the course of his entire career, and I'm not talking about his hairstyle. Martinez has a talented arm, but the head is still undecided. Will his shoulder even allow him to make another 30 starts in a season? He's proven to be a more adept starter than reliever, but top of the rotation status may have passed him by, which makes him expendable for the right asset.

Bader had problems hitting over .200-and with so many young outfielders waiting behind him-he's also very expendable, difficult catch machine or not.

Boston could ask for more, but I can't imagine the load being too much heavier. You're handing them a starting second baseman, rotation arm, and a young defensive-minded outfielder who could pop 20 baseballs over the left-field wall. All of this for just ONE year of Betts, who hits the market in a year.

Betts and Boston avoided arbitration last winter with a one year, $20 million dollar contract. They haven't opened up extension talks with a very good player. He's only 27 years old and will cost in free agency, but maybe the Cardinals don't worry so much about that right now.

This would be a true "go for it" type move by the Cardinals, who would be acquiring him without the full knowledge they could retain him for 2021 and beyond. With aging assets like Yadier Molina and potentially Adam Wainwright, a mad rush next season isn't a terrible idea. The Cardinals are getting younger, but they still have so many older players. I doubt they find a new home for Dexter Fowler AND Matt Carpenter. You could trade for Betts, still run with Dylan Carlson, and drastically improve a feeble lineup. Betts and Carlson going 1-2 in the lineup could be lethal.

It probably won't happen, but dream a little. This makes more sense than trading for Giancarlo Stanton. Betts looms as a better overall ballplayer anyway.

Once again, Betts is exactly what St. Louis needs. And it's November, a time to rake leaves, prep for the cold, and think about large family meals. Keeping the stove semi-hot with Betts-like scenarios isn't a bad idea.

Scott Rolen talks about call to the Hall of Fame