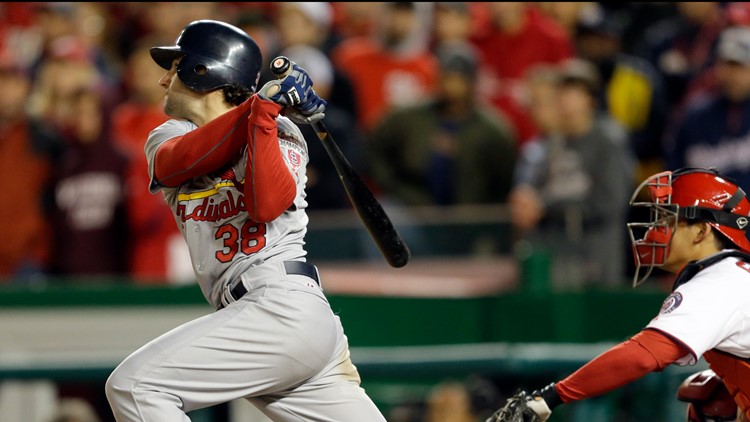 Seven years ago St. Louis' relatively unknown light hitting shortstop became etched in Cardinals (and Nationals) lore and neither fan base has forgotten about it.

So before the Cardinals and Nationals get set for another meeting in MLB's postseason, let's look back on that incredibly dramatic NLDS of 2012.

We'll get to Game 5 here soon, as it's one of the greatest Cardinals games of all-time, but first let's quickly look back on the rest of the series.

Adam Wainwright and the Cardinals dropped Game 1 to the Nats, and then proceeded to open the floodgates in Games 2 and 3, scoring a combined 20 runs to take a 2-1 lead in the series.

Then in Game 4, Jayson Werth's walk off blast off Lance Lynn tied the series at two games a piece.

Enter Game 5. October 12, 2012. Seven years and a day before the Cardinals and Nationals would meet again in October.

Over the past decade plus or so, Cardinals fans are no strangers to crazy moments and memorable comebacks. This was the biggest.

St. Louis sent their ace, Wainwright, to the hill for this deciding game. It did not go as planned.

In the third inning, Nationals Park was going crazy and the Cardinals' season looked to be over. In that third inning, the Cardinals had a win expectancy of just four percent. But then St. Louis showed some resilience that has been a trademark of their postseason teams for what seems like forever. They began to chip away.

A Matt Holliday RBI double in the fourth, two runs on a wild pitch and a walk in the fifth, another Holliday RBI in the seventh and a Daniel Descalso home run in the eighth got the Cards within striking distance. Heading to the ninth, Washington still held a 7-5 lead. Then history happened.

Carlos Beltran led off with a double. Holliday and Allen Craig made outs. Yadier Molina and David Freese walked. And then Descalso came to the plate against Nationals' closer Drew Storen.

Watch: Inside the Cards' locker room after the NLDS

This may be remembered as the "Pete Kozma game" for what happened in a bit, but Daniel Descalso should be the real MVP of this one. Not only did he homer in the eighth to cut the lead, he had the base hit up the middle to score two runs and tie the game in the ninth.

Then it was time for the stone cold Kozma to flip a base hit to right that scored the hero of the previous postseason, David Freese, as well as Descalso, and give the Cardinals 9-7 lead.

All three of their runs in the ninth were scored with two outs off Storen.

Cardinals' closer Jason Motte came out for a 1-2-3 bottom half of the ninth to complete one of the biggest comebacks in postseason history and break the hearts of D.C. sports fans.

It was a surreal game, and one that will forever live on in Cardinals lore and Nationals infamy.

Until 2019, a major league team from D.C. had not won a postseason series since 1924, when Walter Johnson and the Senators won the World Series in seven games over the New York Giants.

Now, the Cardinals and Nationals are set to meet once again in the postseason, this time in the NLCS.

So where are all the key players from 2012 now?

Adam Wainwright, Yadier  Molina and Matt Carpenter are the only members of that Cardinals team still on the 2019 roster. Zimmerman is the only National left standing.

Drew Storen was never quite the same after 2012, and after pitching three more years for the Nationals ended up bouncing around baseball until 2017.

Daniel Descalso is still going strong, as a utility player for the Chicago Cubs.

Pete Kozma played three more years in St. Louis, but never even got close to his five minutes of fame in Game 5. Kozma hit .209 from 2013-2015 with the Cardinals and ended up bouncing around the American League. In 2019, Kozma was with the Detroit Tigers' Triple A affiliate in Toledo, where he hit .263 with seven home runs and 51 RBI.

Even if Kozma never sees another major league pitch in his career, his name will forever be etched in the minds of Cardinals and Nationals fans alike.

Here's hoping the 2019 version of Cards/Nats gives us some similar drama.

RELATED: 5 things Cardinals need to do to win the NLCS