'Be healthy' was the phrase used by Carlos Martinez and Alex Reyes, both of whom know it’s been a long time since either of them could honestly say that was the case

ST. LOUIS — Two pitchers who could have a major impact on the Cardinals success this season took their turns speaking to the media at the annual Winter Warm-Up on Saturday and used the same two words about what will likely be the key to their performance.

“Be healthy” was the phrase used by Carlos Martinez and Alex Reyes, both of whom know it’s been a long time since either of them could honestly say that was the case.

Issues with the strength of his shoulder forced Martinez out of a starting role last season, similar to what happened midway through 2018. All of that, Martinez said, is in the past.

“I’m so happy,” Martinez said. “I am feeling better and better. My arm shoulder and body all feel strong. … I am feeling 100 percent and comfortable. Strong. I can show everybody. I’m waiting for spring training.”

Martinez met with team doctors while in town for the Warm-Up and said he was cleared to throw his first bullpen session on Tuesday after he returns to Jupiter.

“I am looking forward to being smart,” he said. “Last year I got a little frustrated. Right now I am trying to be smart and to be healthy. I’ve got  experience and I think with my experience and healthy I can help the team.”

Martinez said he has been working out every day, not wanting to “lose a day” as he prepares for a chance of winning a spot in the Cardinals’ rotation again.

winter warmup 2020 mini“He has had a nice offseason in terms of what he has put into his workouts,” said John Mozeliak, the Cardinals’ president of baseball operations. “He’s confident that he’s in a good spot. He’s ahead of schedule from where we thought he would be today versus when we were mapping this out in early November.

“Having said that, there’s still some hurdles. Overall there is some optimism there.”

Mozeliak is more cautious about what to expect from Reyes after he has missed so-much time.

A variety of injuries, starting with Tommy John surgery on his right elbow, has forced Reyes to miss almost all of the last three seasons. He did not pitch at all in 2017, then worked a combined total of 67 1/3 innings the last two years, only seven of which came in the majors – in a total of two games.

At one time considered among the best pitching prospects in the game, Reyes is now 25 years old. He knows people are wondering about his future – and if he can stay healthy.

“It’s been three hard years for me,” Reyes said. “Time will tell.

“I believe in myself. Nobody will be able to take that from me.”

One reason Mozeliak is more reserved about Reyes’ current status is the team’s decision to allow Reyes to not focus on rehabbing and to allow him to stay away from the Cardinals’ complex in Jupiter during the off-season..

“Very hands off,” Mozeliak said of their thoughts on Reyes this winter.

“Everything we had done prior to this year has not led us or him to really where he feels good about where he’s at. This year, put the onus on him, allowed him to take a little breather from the Jupiter environment, from maybe the intense rehab environment he’s been exposed to the last few years to have time to breath.

“We did hear back from our medical staff on him this last week. It was encouraging what they said but also be cautious. We’re a few weeks away from being around him daily so probably on a personal level wait for that.

“The reality is that if he is someone who can be a resource to our club, that’s awesome. If it ends up that it’s just not working that’s not out of the realm of thinking either. Fingers crossed and hope.”

reyes main 1-18-20Reyes said he believes the “normal” off-season has been good for him, spending the bulk of the winter in the Dominican Republic. He threw his first bullpen session on Friday and was pleased with how it went.

“Be in an environment that’s not rehab and not thinking about something I have to fix,” Reyes said. “It was more of having a regular offseason. I feel good … It’s been three straight years of rehab, rehab, rehab for me. I thought it was huge for me.

“I feel strong, lost a few pounds. I’m just excited for spring and ready to go. … I know what I can do. I believe in myself. Every time I take the mound my only thought is I’m better than whatever hitter is in the box. That’s how I’ve always been. Nobody’s going to be able to take that confidence away from me.”

Other news and notes from Saturday:

* Mozeliak said he would vote to remove center field cameras and all electronics from the dugout during games in light of the sign-stealing scandal involving the Astros and Red Sox.

“Anything that can happen on the field with nothing other than your mind should be completely allowed,” he said. “It’s been that way for a century. When you start to look at technology or artificial intelligence to help determine those tells, I think that crosses the line.

“I think anything you do before or after a game is free. It’s no different than asking me to help you with your arm angle to make you improve. Electronics or surveillance of any kind which is active in the game should be banned.”

* Mozeliak said he was “hopeful” the team will be able to re-sign free agent Matt Wieters to be the team’s backup catcher again this season.

* Harrison Bader told reporters that he was on a plane flight from Los Angeles to Miami when the news broke that the Cardinals were making a trade with Tampa Bay. That led to what turned out to be false reports that Bader was part of the deal.

He said he had a “few missed heartbeats” when he turned on his phone after the plane landed and saw numerous messages from friends about the reports before finally finding a message from his agent telling Bader he was not part of the trade.

Bader has spent the winter in Miami, where he has been working out regularly with former Cardinal Tommy Pham with a private hitting instructor.

* Barring any additional moves, the favorite to enter spring training as the team’s cleanup hitter will be shortstop Paul DeJong.

* The trade for outfielder Austin Dean from the Marlins was an opportunity to add flexibility to the roster because Dean has options on his contract and can add to the depth at Triple A, Mozeliak said.

* Mozeliak said the Cardinals were close to selling Rangel Ravelo to a Korean team before they traded Jose Martinez to Tampa Bay and decided instead to pivot and keep Ravelo, who will be a candidate to make the roster as the team’s 26th player.

* The addition of a 26th player will create a split of 13 pitchers and 13 position players, Mozeliak said. It will increase the possibility that teams will be able to carry three catchers, he said.

* The Cardinals will not have an early spring training camp for minor-league players this spring, which will result in more players being invited to the major-league camp on a non-roster basis. The list is still being finalized but the total likely will be 69 or 70 players in camp when it opens in mid February. 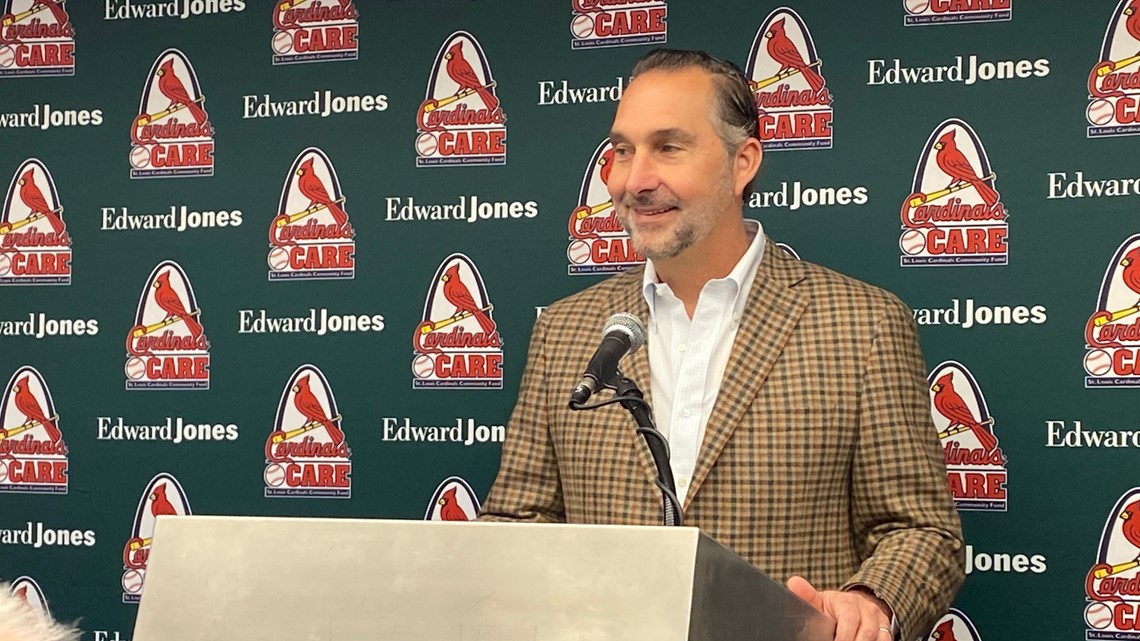 Report: John Mozeliak sees Cardinals' 2020 outfield as open competition, favoring internal options
ST. LOUIS - One of the best things about John Mozeliak is the matter-of-fact diction he uses in front of the media. Always and with each topic. When he speaks, there's never a need to retract or abort the mission of his statement. For fans and media, it can be frustrating and sincere at the same time.