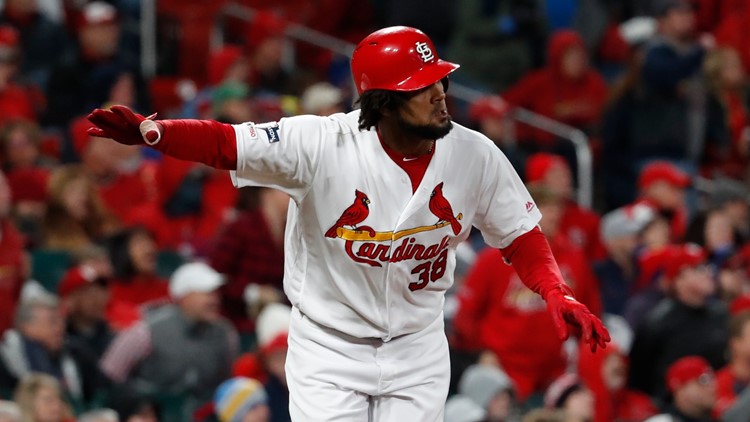 The Cardinals have to get Jose Martinez more playoff at-bats

ST. LOUIS — The Busch Stadium crowd just wanted to cheer about something this weekend. Anything.

While Miles Mikolas and Adam Wainwright more than did their part to ensure that happened, the beleaguered Cardinals offense couldn't help at all.

Except for Jose Martinez.

Off the bench, Martinez accounted for two of his club's four hits in Games 1 and 2, and broke up a no-hitter in Game 1 against Anibal Sanchez.

The Cardinals' starting position players went 58 straight at-bats without a hit dating back to midway through Game 5 of the NLDS. That's an MLB postseason record.

They also let Max Scherzer and Anibal Sanchez throw 14 and two thirds innings of no-hit baseball against them.

Paul DeJong, Dexter Fowler, Yadier Molina and Matt Carpenter can't buy a hit. Combined, those four are 11 for 90 this postseason. That's an average of .122.

Something has to change, before St. Louis finds themselves sitting on the sidelines for the World Series.

Mike Shildt has proven to be a good decision maker so far during his tenure at the helm of the Cardinals. He knows his team, and for the most part they've been able to back him up.

But now he absolutely has to shake things up. He has to put Jose Martinez in the lineup. Martinez is four for five in pinch-hitting duties this postseason, and as I previously mentioned, is responsible for half of his team's NLCS hits.

Martinez, the leader of the Cardinals 'bench mafia', has said all the right things and performed like a true pro even though his at-bats are few and far between. Think about how hard it is to sit on the bench in 40 degree weather and then be asked to pinch hit to break up a no-hitter in the eighth inning of a postseason game... and then deliver. All the guy does is hit. But he's still embracing whatever role his manager determines for him.

"It's (not getting a start) not hard at all," Martinez said. "Like I've said before this has been my role since the first day of spring training actually. I'm just out there enjoying my job and I know what I have to do out there. If there's an opportunity from the skipper to get me in the lineup that'd be great, but right now my job right now is to come off the bench and get some good at-bats."

Shildt did make a move earlier this postseason, swapping Harrison Bader for Matt Carpenter, but now it's time for him to make another one.

Watch: Mike Shildt talks after Cardinals go down 0-2 to Nationals

"You can't ignore the fact he's (Martinez) taking good at-bats," Shildt said after Game 2. "There'll be some contemplation about how we move forward and how we look to compete. And again, I'll look at it from the lens we always look at it. Who's taking the kind of at-bats, who's on time, what's the match-ups, all the different things we always factor into it. It's good to know Jose's in a good place and taking good at-bats and it can't be ignored."

The only reason Martinez isn't in the lineup already has to do with his defense.

It's no secret that Martinez is not a good fielder in the outfield or at first base. But right now, the Cardinals have to do anything to give their offense some kind of spark, even if it means sacrificing a bit of range and comfortability in the outfield.

Former Cardinal Andy Van Slyke also made a good point about getting Martinez into the lineup in one of our previous "Cardinals Plus" shows on 5 On Your Side. If Jack Flaherty is on the mound, like he will be in Game 3, you're probably going to see less chances for a guy like Martinez in right field, because Flaherty has been so dominant.

If I'm Shildt, I roll with a lineup that looks like this in Game 3 against Stephen Strasburg:

You get Martinez in the middle of the lineup to hopefully add a spark, while also moving Fowler out of the leadoff spot, where he's taken some good at-bats, but not finding any results.

This Cardinals team we saw in the first two games against the Nationals doesn't look like one that should've even made the playoffs, much less be four wins away from going to the World Series.

Obviously, even if he does continue hitting, adding Martinez to the mix won't solve all of the Cards' offensive woes. They're going to need multiple guys to start contributing. But at least this could be a start.

There's still time to turn it around, but at this moment in time it looks incredibly unlikely that will happen with the exact same lineup over and over again.

RELATED: Cardinals Plus Podcast: Cardinals offense goes M.I.A. at home, do they still have a chance in the NLCS?

RELATED: Comparing the 2019 Cardinals to the Stanley Cup champion Blues