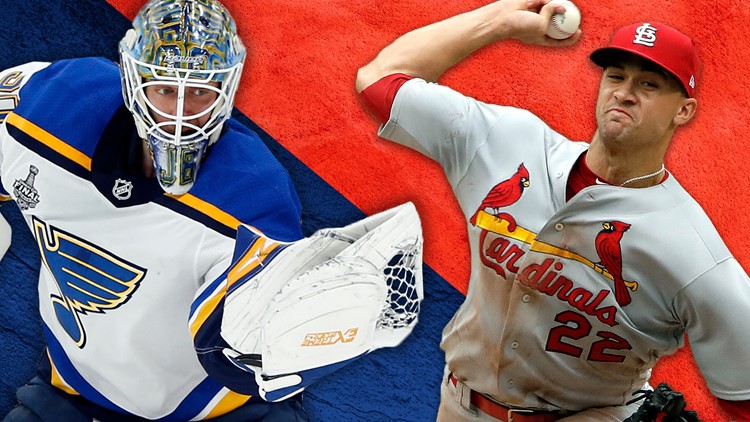 ATLANTA — Stop me if you've heard this one before.

Young phenom at his team's most important position has incredible second half that in turn powers his St. Louis club to the postseason.

We've seen it happen twice this year. One ended up leading his team to a championship. The other will get his shot to do the same.

Jack Flaherty needs to be the Cardinals' Jordan Binnington in the 2019 postseason.

Watch: Jack Flaherty talks ahead of Game 2 start in NLDS

Binnington didn't get his first start of last year until January 7, halfway through his team's season. Jack Flaherty didn't seem to turn the corner on his season until that July 7 start in San Francisco.

Of course, Binnington's ascension was quite a bit more unexpected than Flaherty's. There wasn't a Cardinals fan around who didn't know Jack before this season began. Jordan probably still didn't get recognized around town until the playoffs began.

The Cardinals need a 'Binnington' to guide them through the postseason, and Flaherty certainly looks to be the most likely candidate. They need a guy to stand up and announce his presence as the stopper.

Since that July 7 start against the Giants, Flaherty is 7-3 with a 0.93 ERA, .139 opposing batting average and has only allowed six home runs in 106 innings.

In Jordan Binnington's 30 regular season starts, he had a save percentage of .930.

(I'm not even kidding, you can look it up. Flaherty had an ERA of 0.93 and Binnington had a save percentage of .930. Isn't it crazy how numbers work out sometimes?)

Jack Flaherty and Jordan Binnington both have the ability completely own a game on any given day. Binnington stole more than a few games during the Stanley Cup playoffs, and now it's time for Flaherty to steal some games for the Cardinals, and he's chomping at the bit.

"I'm just excited," Flaherty said on Thursday. "To be here with these guys and be in this situation. I know how far we've come during this season."

And don't worry about the pressure of the playoffs getting to Flaherty either, he knows to trust what got him to this point.

There are just certain guys where the big stage and bright lights only add to their ability and effectiveness. The "not nervous" Jordan Binnington proved he was that guy. Flaherty appears to have similar DNA.

The Blues had the hottest goalie in hockey, and that ended up propelling them to their first ever championship.

The Cardinals have the hottest pitcher in baseball, who they're hoping will lead them to their twelfth, and at least a two to nothing series lead in the NLDS on Friday.

RELATED: Kolten Wong is back for the Cardinals in the NLDS

RELATED: Cardinals need Goldschmidt, Ozuna to be at their best to find October success