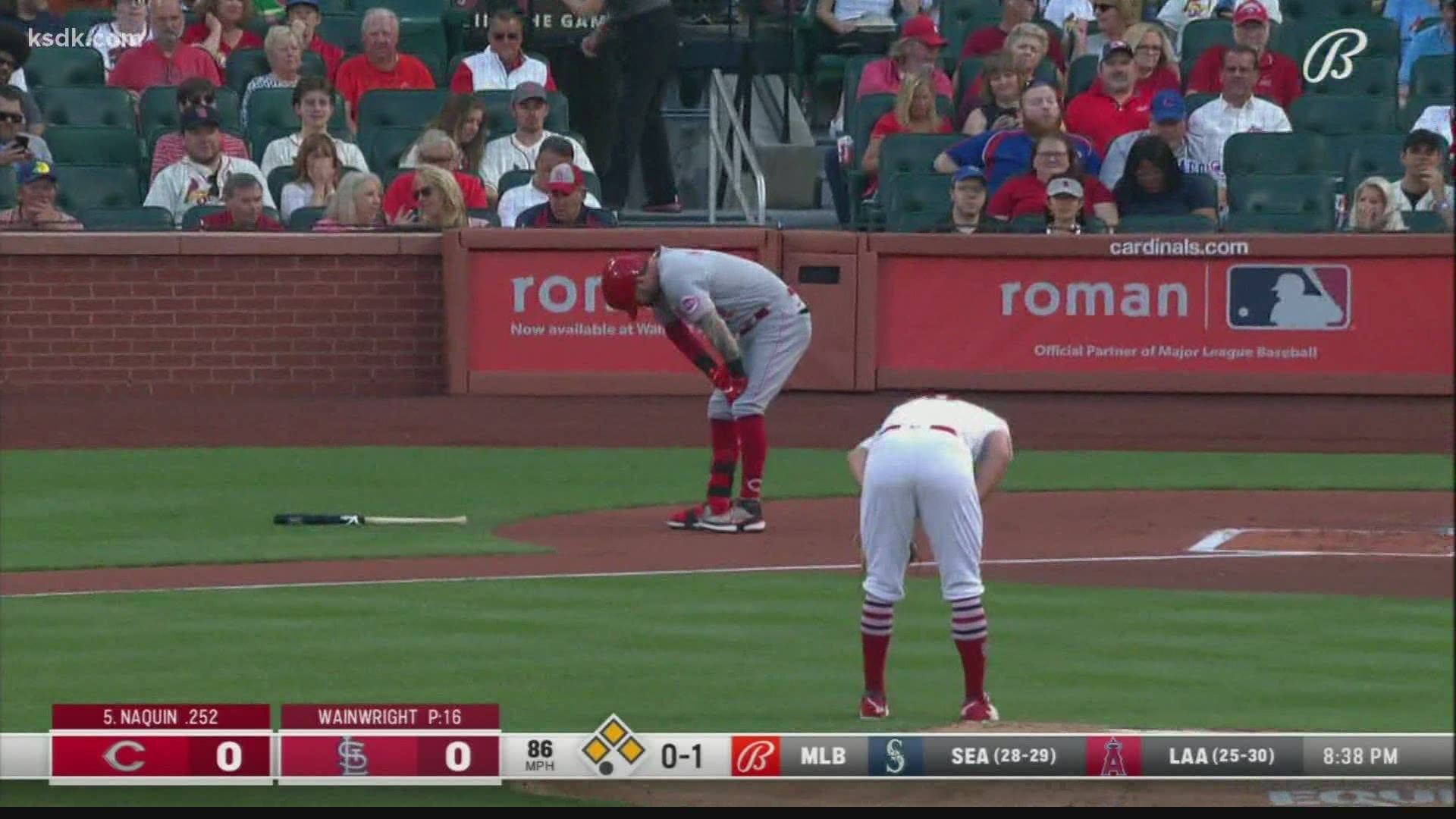 Adam Wainwright has not made many mistakes while pitching at Busch Stadium this season but he felt he made two on Thursday night, leading to the Reds’ win over the Cardinals.

In the first inning, Wainwright gave up a pair of singles – but those weren’t the mistakes. They came to the next two batters, both of whom he hit with a pitch.

The first loaded the bases and the second forced in the first run of the game. When Jesse Winker hit a two-run homer off Wainwright in the second, they had all the runs they would need to win the opener of the four-game series.

The run in the first snapped a string of 19 scoreless innings at home for Wainwright, who came into the game with an ERA of 2.41 in six games.

After playing Wednesday night in Los Angeles, the Cardinals’ charter did not arrive back in St. Louis until 5:15 a.m. Thursday, although Wainwright flew home on a commercial flight earlier Wednesday.

Here is how Thursday night’s game broke down:

At the plate: Trailing 1-0 before they came to bat, the Cardinals scored twice in the bottom of the inning on singles by Tommy Edman (who stole second), Tyler O’Neill and Yadier Molina … Molina’s hit, however, turned out to be the last for the Cardinals until Edman singled with two outs in the seventh. Their only two baserunners over that stretch came on three walks … Singles by Matt Carpenter and Edmundo Sosa, on a bunt, gave the Cardinals a chance in the ninth, but Jose Rondon bunted into a double play and Edman struck out to end the game … O’Neill’s hit in the first extended his hitting streak to a career-high 11 games.

On the mound: Wainwright pitched seven innings, scattering eight hits and striking out four. He did not walk a batter… The Reds added an insurance run in the eighth off Daniel Ponce de Leon, who saw a walk turn into a run on a double by Tucker Barnhart … Ryan Helsley pitched the ninth, and combined, they held the Reds hitless in 10 at-bats with a runner in scoring position.

Key stat: It’s been well-documented that the Cardinals lead the majors in walks, but the three hit batters on Thursday night, all by Wainwright, gave them the major-league lead in that category as well with 43, three more than the Cubs.

Injury updates: To activate Andrew Miller from the injured list, Tyler Webb was designated for assignment. If he is not traded or not claimed off waivers, he could go to Memphis but would be off the 40-man roster. Webb was out of options and had a 13.22 ERA in 22 appearances this season. The biggest problem was walking 19 hitters in 16 1/3 innings. “The biggest issue with him right now is his inability to consistently throw strikes,” said John Mozeliak, president of baseball operations. “I think he’s been fighting himself in that regard. He’s a guy who was able to pitch up and down in the zone and get guys to swing at it, and now they’re not.” … No timetable has been set for how long Jack Flaherty will be out with the oblique injury he suffered Monday night … Paul DeJong is scheduled to undergo more imaging Friday and those results will help determine when he will be ready for a rehab assignment.

Worth noting: Paul Goldschmidt had a scheduled day off Thursday night … Willie McGee missed the game to attend his son’s high school graduation in California … Top pitching prospect Matthew Liberatore will get one more start for Team USA as it tries to qualify for the Olympics, then rejoin Memphis. Mozeliak said if the U.S. team does qualify for the Summer Games in Tokyo, then the organization will have to make a decision on whether to let him go or let him continue pitching at Memphis, which might hinge on what is happening with the team’s overall pitching depth, Mozeliak said.

Looking ahead: Kwang Hyun Kim will get the start on Friday night in the second game of the series.