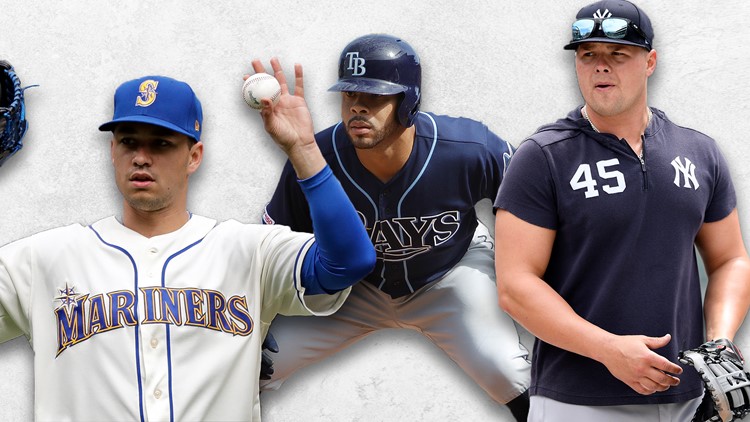 Would you want a re-do on any of these Cardinals trades?

Cardinals President of Baseball Operations John Mozeliak is the most second-guessed guy in St. Louis.

I think he could trade for the entire National League All-Star team and some people would still find an issue.

This doesn't mean he hasn't had some clunkers over the years... Hello Ty Wiggington, Brett Cecil, Mark Ellis and Greg Holland.

RELATED: Dexter Fowler's swing and smile have returned in 2019

So far in 2019 it's hard to argue with the squad he, general manager Mike Girsch and the DeWitt's have assembled. As of Wednesday afternoon, the Cardinals have the second most wins in the National League and just about the entire lineup is clicking.

But just for fun, let's take a look back on some recent trades and see if we'd like to hit the re-do button on any of these.

- Tommy Pham to the Rays for Genesis Cabrera, Justin Williams and Roel Ramirez

This looks like it will be the biggest misstep of the past few seasons for the Cardinals.

Sure, Genesis Cabrera has tremendously exciting upside, but Tommy Pham has seemed to have taken his game to another level in Tampa.

He's also shown off his wheels for the Rays. Pham has 11 stolen bases and eight triples so far in Tampa. He had seven triples in his entire time in St. Louis.

Of course, it's still a little early to call this trade a total loss for the Cardinals.

Genesis Cabrera has a big arm and loads of potential. He has 415 strikeouts in 453.2 minor league innings. Recently though, the 22-year-old has struggled a bit. In three spring training innings for the Cardinals earlier this year, Cabrera gave up seven earned runs to the tune of an ERA of 21.00. So far the AAA regular season hasn't been kind to the young Dominican either. He currently holds an ERA of 8.10 for Memphis.

Justin Williams has yet to even play a game in 2019.

The outfielder broke his hand at the end of last year when he punched a television.

In 21 games with Memphis after the Pham trade, Williams hit .217 with three homers and 11 RBI.

- Luke Voit to the Yankees for Chasen Shreve and Giovanny Gallegos

Paul Goldschmidt is one of the best players in baseball, and will be a Cardinal through 2024.

That makes this trade a bit easier to swallow.

St. Louis kid Luke Voit was a nice story for the Cardinals in 2017 and 2018. However, he was never seen as "the guy" that would take over at first base in the future.

Therefore, he was expendable for some relief help in the form of Chasen Shreve and Giovanny Gallegos.

All Voit's done since being traded to New York is take the entire city by storm.

This season, Voit has almost single-handedly carried the badly banged up Yankees. Voit currently leads or is tied for the team lead in runs, walks,  home runs and RBI.

Chasen Shreve was pretty good for the Cardinals in 2018, posting a 3.07 ERA in 20 games, but was designated for assignment following spring training this year and was sent to Memphis. At Memphis in 2019 Shreve has a 6.57 ERA in 12.1 innings.

Giovanny Gallegos has appeared in eight games for the Cardinals so far in 2019, usually in a mop up role, but has logged a respectable 2.86 ERA in 9.1 innings.

- Marco Gonzales to the Mariners for Tyler O'Neill

This is an interesting one.

At the time, it seemed like a great trade for the Cardinals. St. Louis got a power-hitting top prospect and only gave up a guy who didn't really have a fit in their future rotation plans.

While we've seen flashes of what O'Neill can be, he's still blocked by four others in the crowded Cardinals outfield.

All that Gonzales has done in 2019 is lead the league so far in wins going 5-0, holds an impressive 2.80 ERA, and is averaging over six innings a start. He's also left-handed, which is a commodity the 2019 Cardinals are certainly short on.

- Stephen Piscotty to the A's for Yairo Munoz and Max Schrock

Obviously there was more to this particular deal than baseball performance.

This trade allowed Piscotty to move closer to home to be with his late mother before she lost her battle against ALS.

Since he's been in Oakland, Piscotty has put up some impressive power numbers. He has 31 and 46 doubles home runs in 182 games as an Athletic.

Overall, Munoz has been a nice utility player for the Cardinals the past two seasons, hitting .274 with eight home runs and 42 RBI in 118 games.

24-year-old Schrock is still in the minors, but has proven he can hit at any level. In five minor league seasons Schrock holds a .302 average.

Like Piscotty, Grichuk was another casualty of an overcrowded outfield.

His strong defense and flashes of impressive power made him a favorite among some Cardinals fans, but that couldn't save him from being shipped to Canada  before the 2018 season.

So far, Dominic Leone hasn't been quite the guys the Cardinals were expecting to get from Toronto.

Hard-throwing Conner Greene is no longer with the Cardinals. He was claimed on waivers by the Royals at the end of 2018, and has never quite been able to get his high velocity stuff to translate into a call to the big leagues.

Aledmys Diaz to the Blue Jays for J.B. Woodman

People forget Aledmys Diaz was an All-Star during his rookie season of 2016 when he hit .300 with 17 home runs.

With the arrival of Paul DeJong, Diaz became expendable.

Diaz is now with the Houston Astros in a super-utility role.

So what do you think? Should the Cardinals be regretting any of these deals?

This week on the Sports Plus Podcast, Mike Bush, Frank Cusumano, Craig Moeller and Corey Miller talked about some recent deals the Cardinals might consider pushing the "re-do" button on.