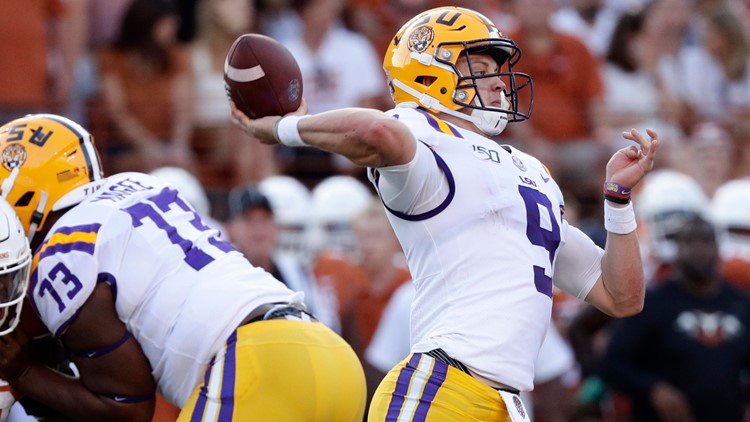 Photo by: AP
LSU quarterback Joe Burrow (9) throws a pass during the first half of an NCAA college football game against the Texas, Saturday, Sept. 7, 2019, in Austin, Texas. (AP Photo/Eric Gay)

Any LSU fans still skeptical about the Tigers new-fangled offense have to be converts after Saturday night.

The Tigers went into enemy territory and outscored the 9th-ranked Longhorns 45-38.

If any play symbolized LSU’s new approach it was a 3rd and 17 play in its own territory with just over two minutes to play and holding on to a 37-31 lead. The old Tigers would have made Texas burn its last timeout and then taken its chances with the defense. The new Tigers aired it out and Joe Burrow found a wide-open Justin Jefferson on a crossing route that went for a 61-yard touchdown. LSU doesn’t make that call in past years.

“We trust him,” head coach Ed Orgeron of Burrow. “We thought about going for it. He got the job done.”

For the second game in a row, Burrow was on fire. He hit 31 of 39 passes for 471 yards and four touchdowns.

RELATED: LSU-Texas will measure if Longhorns are really back

Three, yes three receivers had over 100 yards – Jefferson hauled in 9 passes for 163 yards, JaMarr Chase caught 8 for 147 and Terrace Marshall Jr. had six for 123 more.

If there is any concern now for LSU, it might be the defense that allowed Texas to stay in the game until late.

"We won't win a lot of games giving up 38 points," said Orgeron. "We made plays on offense. We didn't make many plays on defense tonight."

Texas also had a prolific scoring night with 409 passing yards and 121 yards rushing.

The Longhorns led 7-3 early, but once the Tigers took the lead on a Burrow to Jefferson pass for a 10-7 lead, LSU never gave it up, though the Horns made it close several times.