On Sunday, the Cleveland Browns will open their highly anticipated 2019 season when they host the Tennessee Titans at FirstEnergy Stadium. 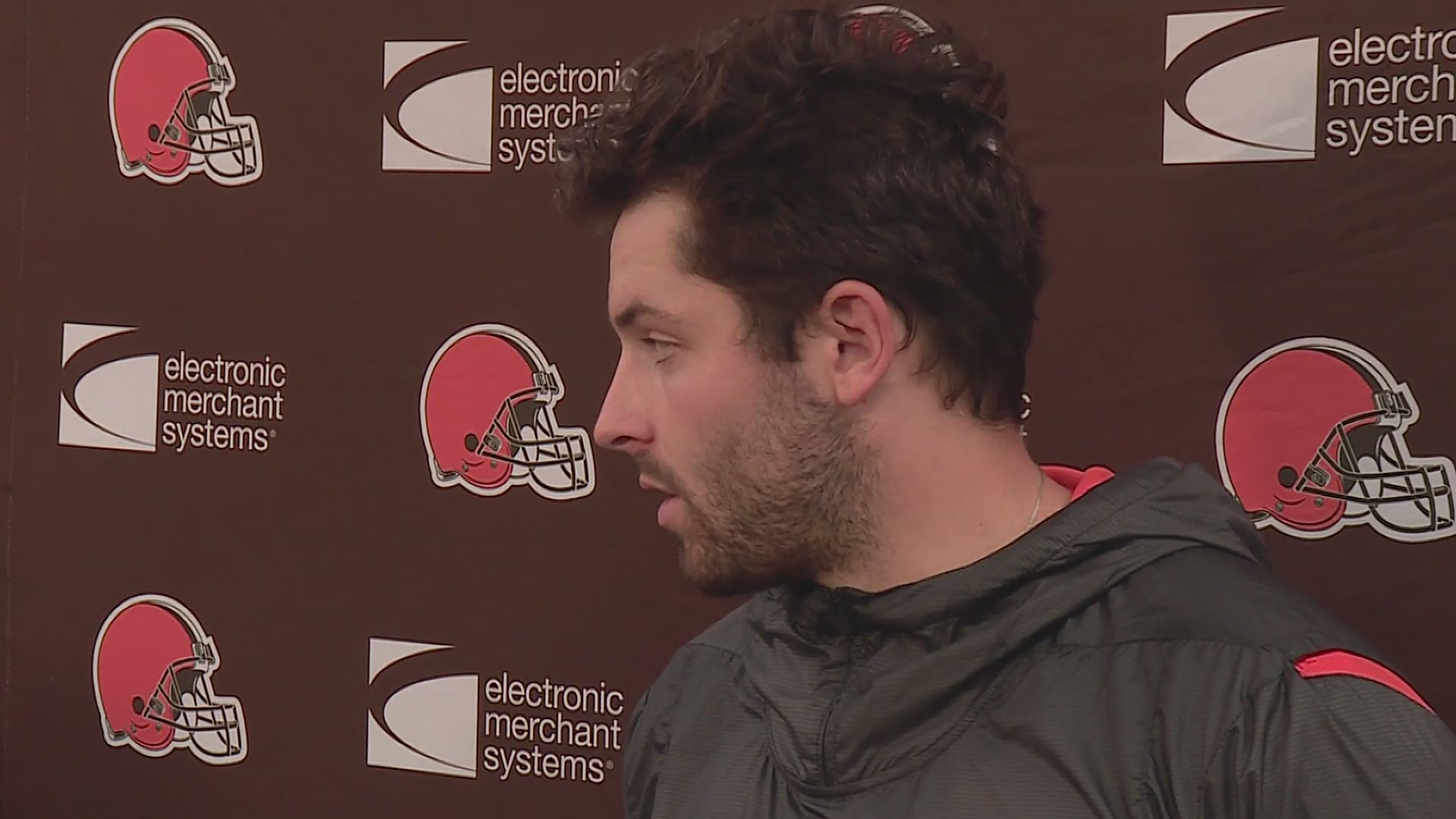 CLEVELAND — On Sunday, it will have been 616 days since DeShone Kizer's pass bounced off the hands of Corey Coleman in Pittsburgh as the Cleveland Browns clinched just the second 0-16 season in NFL history.

What a difference 20 months makes.

Less than two years removed from compiling a winless season -- which marked the end of a two-year stretch in which Cleveland went a combined 1-31 -- the Browns enter the 2019 season as arguably the NFL's hottest team.

Totaling a 7-8-1 record a season ago -- which marked the franchise's best record since 2007 -- Cleveland was already considered an up and coming team with one of the league's best young quarterbacks at the start of the offseason. And that was before the Browns made a blockbuster trade that possesses the potential to alter the landscape of the NFL.

On Sunday, Cleveland will host the Tennessee Titans for a 1 p.m. ET kickoff, which will double as one of the most highly anticipated season openers in recent memory. Can the Browns live up to the hype as the favorites to win the AFC North, and if so, just how high is this team's ceiling? We'll find out in the weeks and months to come.

Until then, here's our preview for the Cleveland Browns' 2019 season:

Following his successful stint as the Browns' interim offensive coordinator in the final eight games of the 2018 season, Cleveland hired Freddie Kitchens as its new head coach on Jan. 9, 2019.

Originally hired as the Browns' running backs coach prior to the 2018 season, the 44-year-old Kitchens has enjoyed a rapid rise in the coaching ranks over the course of the past year. Although he had never held the title of "coordinator" prior to last October, the former Alabama quarterback was so impressive in his half-season running the Browns offense that he now finds himself running one of football's most highly touted teams.

Prior to his arrival in Cleveland, Kitchens spent 11 seasons as an assistant coach with the Arizona Cardinals, coaching tight ends (2007-2012), quarterbacks (2013-16) and running backs (2017). He is considered a descendant of Bruce Arians' coaching tree and also possesses experience working under Ken Whisenhunt, Bill Parcells and Nick Saban.

Like many NFL teams, the Browns' coaching staff is littered with former players and young up and comers, perhaps none as important as wide receivers coach Adam Henry, whose time at LSU could prove crucial for a Cleveland roster full of ex-Tigers.

RELATED: 3 potential problems the Cleveland Browns could face in 2019

The Browns enter 2019 laying claim to one of the most talented offenses in the entire NFL.

The unit starts with second-year quarterback Baker Mayfield, who completed 63.8 percent of his passes for 3,725 yards and an NFL rookie record 27 touchdowns in 14 games last season. Perhaps most promising for Cleveland is that the 2017 Heisman Trophy winner seemed to especially excel under the direction of Kitchens, whose personal connection to Mayfield has been cited as one of the primary reasons he was promoted to head coach.

Also promising for the Browns: They possess arguably the league's most talented receiving corps. Jarvis Landry, Rashard Higgins, Antonio Callaway and tight end David Njoku each return as key contributors from a season ago to a unit that has only been bolstered by Cleveland's blockbuster acquisition of Odell Beckham Jr.

In trading for Beckham, the Browns now pair one of the league's most talented young receivers with of its best young quarterbacks. In five seasons with the New York Giants, the 2014 NFL Offensive Rookie of the Year totaled 390 receptions for 5,476 yards and 44 touchdowns en route to earning three Pro Bowl appearances.

The addition of Beckham should only help open lanes for running back Nick Chubb, who rushed for 996 yards and 8 touchdowns as a rookie, despite not taking over as a starter until midway through the 2018 season. The Browns could also receive a boost at the midway point of this season when former Pro Bowl running back Kareem Hunt is expected to return from his eight-game suspension to start the year.

If Cleveland's offense has one Achille's heel, it could be its offensive line, which is shaky at tackle, unsettled at right guard and lacks overall depth. But the Browns don't need their offensive line to be great, but just good enough in order for one of the league's most talented units to live up to the hype.

Credit: Ron Schwane
Cleveland Browns defensive back Denzel Ward (21) keeps his eyes on Atlanta Falcons wide receiver Mohamed Sanu (12) in the first half of a game at FirstEnergy Stadium in Cleveland on Sunday, November 11, 2018.

While it's the Browns' offense that has received the bulk of the headlines this offseason, it was the team's defense that general manager John Dorsey seemed to focus most of his attention on.

Like its offensive counterpart, Cleveland's defense is talented, especially on the defensive line, which is anchored by Defensive Player of the Year candidate Myles Garrett. The linebacking corps, however, currently lacks a true playmaker, the secondary could be shaky and at the very least, the unit's overall depth is currently unproven.

In a best-case scenario for the Browns defense, Garrett, Vernon and cornerback Denzel Ward will build on their Pro Bowl years, while Williams and Wilson emerge as additional difference-makers. Like the team's offensive line, Cleveland's defense just needs to be good enough -- although the pieces are certainly in place for it to be more than that.

Between fifth-round pick Austin Seibert and Jamie "The Scottish Hammer" Gillan, the Browns will be relying on a pair of unproven rookies at both kicker and punter to start the 2019 season. Backup running back Dontrell Hilliard and D'Ernest Johnson will each contribute to the team's run game, although Antonio Callaway will likely become the team's primary return man once he returns from his four-game suspension to start the season.

Depending on the game situation, Beckham and Landry also provide value as potential punt returners.

Considering the newfound notoriety, perhaps it shouldn't come as a surprise it won't take long for the Browns to find themselves in the national spotlight.

After hosting the Titans on Sunday in what could be its first Week 1 win since 2004, Cleveland will take on the New York Jets in a Week 2 matchup on Monday Night Football. A week after that, the Browns will host the defending NFC champion Los Angeles Rams on Sunday Night football two weeks before another Monday Night Football matchup at the San Francisco 49ers on Oct. 7.

By the time it enters its bye week following an Oct. 13 matchup vs. the Seahawks, Cleveland will have played six games -- three of which will be on the road and three of which will be nationally televised. After returning from their bye, the Browns will head to Foxborough to face the defending Super Bowl champion New England Patriots with another road game against the Denver Broncos only a week away.

After that, the Browns' schedule should get a little bit easier with the Baltimore Ravens being the only playoff team from 2018 Cleveland is scheduled to face after the Oct. 27. The key for Cleveland this season will be keeping itself in position to take advantage of the back end of its schedule which includes five combined games against the Cincinnati Bengals, Buffalo Bills, Miami Dolphins and Arizona Cardinals -- and then doing just that.

Credit: Ron Schwane
Cleveland Browns quarterback Baker Mayfield celebrates a two-point conversion reception on a pass from wide receiver Jarvis Landry in a 21-17 win over the New York Jets at FirstEnergy Stadium in Cleveland on September 20, 2018.

While more than two decades' worth of dysfunction has typically been blamed for the Browns' on-field struggles since returning the NFL in 1999, the biggest thing that Cleveland lacked has been general talent.

In Mayfield, the Browns finally have a franchise quarterback, who has been surrounded with blue-chip talent in the form of Beckham, Landry, Chubb and Hunt. Admittedly, I think the teams' defense has more question marks than its getting credit for, but overall, players like Garrett and Ward should help mask the majority of the unit's shortcomings.

For all the skepticism I've seen about the Browns -- that they'll succumb to the expectations or that this is a franchise less than two years removed from going 0-16 -- very few of the concerns seem to actually have anything to do with football. Based on talent alone, Cleveland should be good enough to win its division and even a home playoff game.

I'm predicting the Browns will do just that.