Allen accepted backup role a while back, relishing his Stanley Cup Final experience

"I've put the ego aside, put everything aside all for the team right now. I feel like I've been doing that since Binner's started his run there," Allen said. 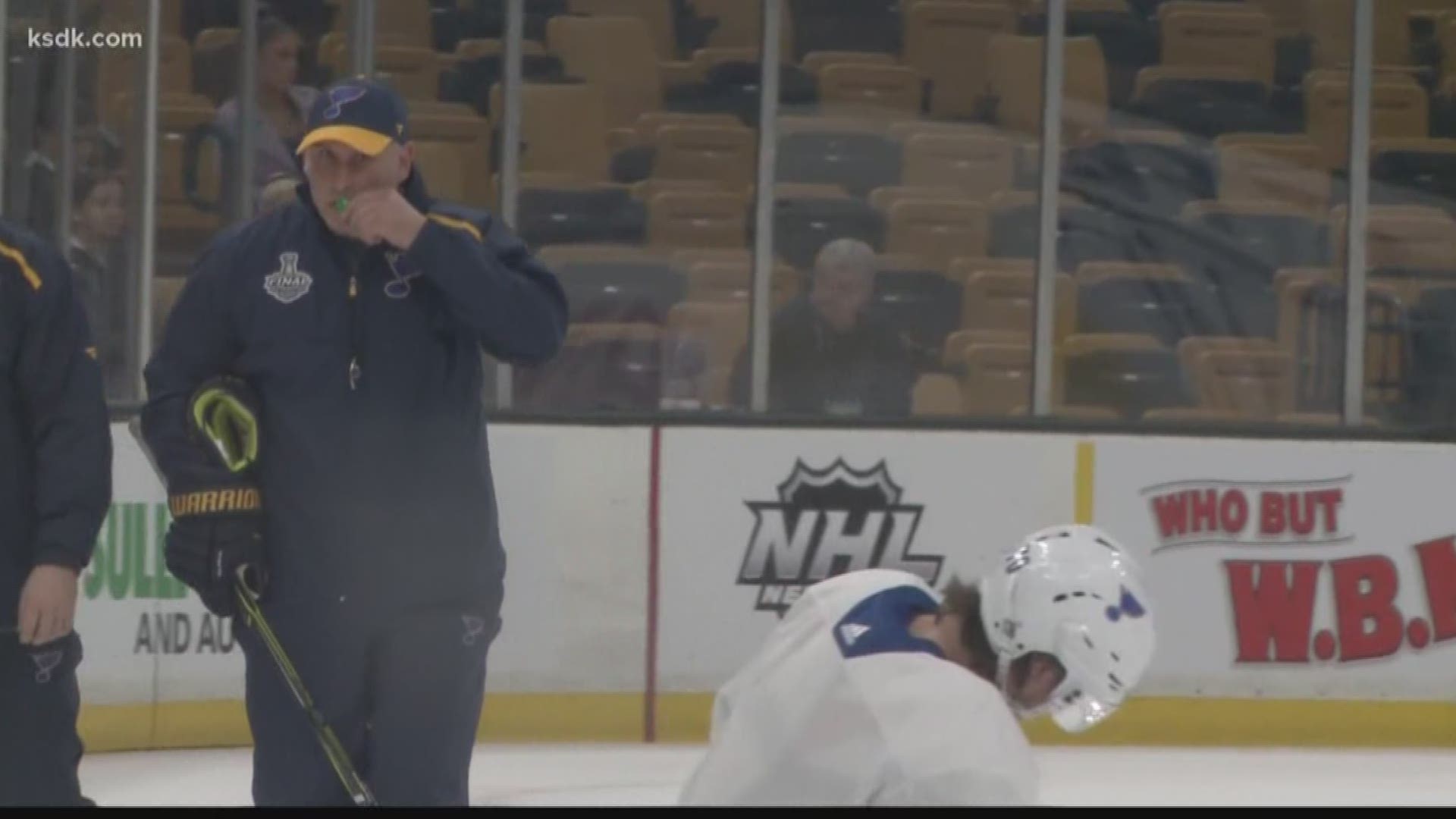 BOSTON -- Make no mistake about it, Jake Allen is one of Jordan Binnington's biggest fans.

But you'll have to forgive Allen if he didn't feel a little selfish in regards to wanting to be the goalie on the ice that helped the Blues reach their first Stanley Cup Final since 1970 when they open Monday in Game 1 against the Boston Bruins.

There was Allen, among the first goalies to go to a personal stall with his nameplate behind him, answering questions. Not about himself or his play in helping the Blues get to the final, but talking about Binnington and the run he's been on that helped fuel St. Louis' run since Jan. 7, and displace Allen from a spot he's been since the start of the 2016-17 season.

And instead of pouting or fretting about what might have been, the 28-year-old Fredericton, New Brunswick, native is soaking up an experience that he may perhaps never be a part of again.

"No, this has just been a blast for me," Allen said at Sunday's Media Day at TD Garden on the eve of the Game 1. "I've put the ego aside, put everything aside all for the team right now. I feel like I've been doing that since Binner's started his run there. He's been the best goalie in the league since he took over and he's very deserving of everything he's gotten so far. For me, it's been a pleasure to watch.

"... This is a once-in-a-lifetime opportunity. I don't know if I'll ever get another chance to get back to the finals. You really want to say for sure that you are, but I've enjoyed this whole ride. It's something special. I can feel it ever since before the playoffs started. When you're on one of those runs, it's just a different feeling than I've ever had before, within our locker room, within our city and within our group. For me not playing as much, I'm not surprised where we are. Guys deserve it and it's going to be a great series."

RELATED: Vladimir Tarasenko is heating up, and that should terrify Boston

And when the Blues started the season as poorly as they did, with everyone in the lineup underperforming, Allen found himself in early competition with Binnington before soon giving up the cage to the 25-year-old who went 24-5-1 with a league-leading 1.89 GAA and .927 save percentage.

"I've known him fairly well before he came up here," Allen said of Binnington. "He was drafted by the Blues, he's been in the system for a while. I got to know him fairly well that way off the ice. It's not on the ice as much. I always knew he was a really good goalie. There's so many goalies in the American Hockey League. It's always about opportunity. Some guys unfortunately never get one. Some guys wait longer. Binner had to abide his time and he got his chance and made the most of it and he hasn't looked back. It's really great for him.

"I think he's got strong confidence and belief in himself. You can see that in his play. You can see that in the way he handles himself. I think he's matured a lot ever since I first met him as a kid. It's just translated on the ice as well. He sort of put the whole package together and some guys would have folded in after getting sent around in the minors. After getting sent around in the minors, he really stuck with it and he's done a helluva job."

One has to wonder what it feels like to be the second fiddle when a playoff series is over, to go to congratulate and surround the guy that got the four wins in a series as opposed to the guy that is the buffer, the moral support, if you will.

RELATED: 'The credential I have been waiting to put on' | Follow Frank Cusumano at the Stanley Cup Final in Boston

RELATED: How to add 'Let's Go Blues!' to your Facebook profile pic

Binnington has played in every postseason game, including series-clinchers over Winnipeg in Game 6, Dallas in a dramatic double-overtime Game 7 and San Jose in six games, while Allen does all the little things behind the scenes now, including being a solid practice guy, staying ready in case you're called upon, helping Binnington remain sharp and focused with advanced scouting reports on teams and shooters, things that aren't necessarily seen as difference-makers on the surface.

It's only human for Allen to want to be the guy.

"Yeah, no question. You always think about it," Allen said. "I'd be lying to you if I said I never did, but I understand where I'm at. I understand my position. I bought into that a while ago before the playoffs. You knew it was going to happen. It's just I'm a realist. I understand the business of this game. Probably mid-March, I sat back and I took my role. I understood. I was ready to be called upon. When I played, I thought I had a really great second half to the season, probably some of the best hockey I've ever played, but Binner's been unbelievable. He's the best goalie in the league and I just bit the bullet and said, 'Alright, this is something special.' I knew we had a good group here. It's been amazing. It's hard to put into words. I don't really know that it's sunk in that we're in the Stanley Cup final from where we were at the start of the year. I've been through this whole roller coaster, the ups and downs, the peaks and valleys, especially over the last even three, four, five years, but to see us here and to just be a part it is awesome."

And that's why Allen is loved by his teammates, including Binnington.

"We're all competitors, right," Blues captain Alex Pietrangelo said. "We all want to be the guy, but, and I'm being dead series, he's been nothing but professional. He's been really, really good. One, for us knowing the tendencies and weaknesses on other goalies, helping Binner out, giving him prescouts on shooters, whatever it is. But he's been nothing but professional. It sucks. It's obviously not easy to go through. I've been really impressed.

Binnington said: "He's been incredible. I've known Jake for a number of years now being in the organization. He's always been good to me. His work ethic is really respectable. He's a great goaltender. I think the team is confident in either one of us. He's a great mentor for me and goalie partner also."

Allen is part of a core group, including Pietrangelo, Alexander Steen, Jay Bouwmeester, Jaden Schwartz and Vladimir Tarasenko that helped build this up before Colton Parayko, Joel Edmundson, Vince Dunn, David Perron (returning for a third stint) and some of the others, including newcomers Ryan O'Reilly, Tyler Bozak, Robert Thomas and others build this thing to where it is now. He can take pride in that his help from a low place at one time built the Blues into the Western Conference champion it is today.

"Yeah, for sure. I think since I've been here, even the guys when I was coming up in 2012, helped me ease my transition," Allen said. "I feel like even though I'm not playing the games, I still feel like I'm part of this team in a sense where you're making it easy on the young guys I'm helping Binner out, you're doing things. You feel like you've chipped in some way, shape or form, whether it's this year, last year, three years ago to get to this point. I think we all should be proud of that, but at the same time, we've still got a lot of work to do."

Allen still has two years remaining on his contract at a $4.35 million cap hit. Would he ask the Blues in the offseason to trade him to get a fresh start and a chance at starting again? Perhaps. But in the meantime, he'll be the rock for Binnington as he continues this incredible journey of leading the Blues from worst to first.

"We wouldn't be here without him," Pietrangelo said of Allen. "He's played a lot of hockey over the last couple years for us. We know what he's done for us. I know Binner knows that too. They've got a good thing going with each other."