Three forwards, three D and one goaltender. I think we've got character kids, kids with skill, kids with size, lots of ability 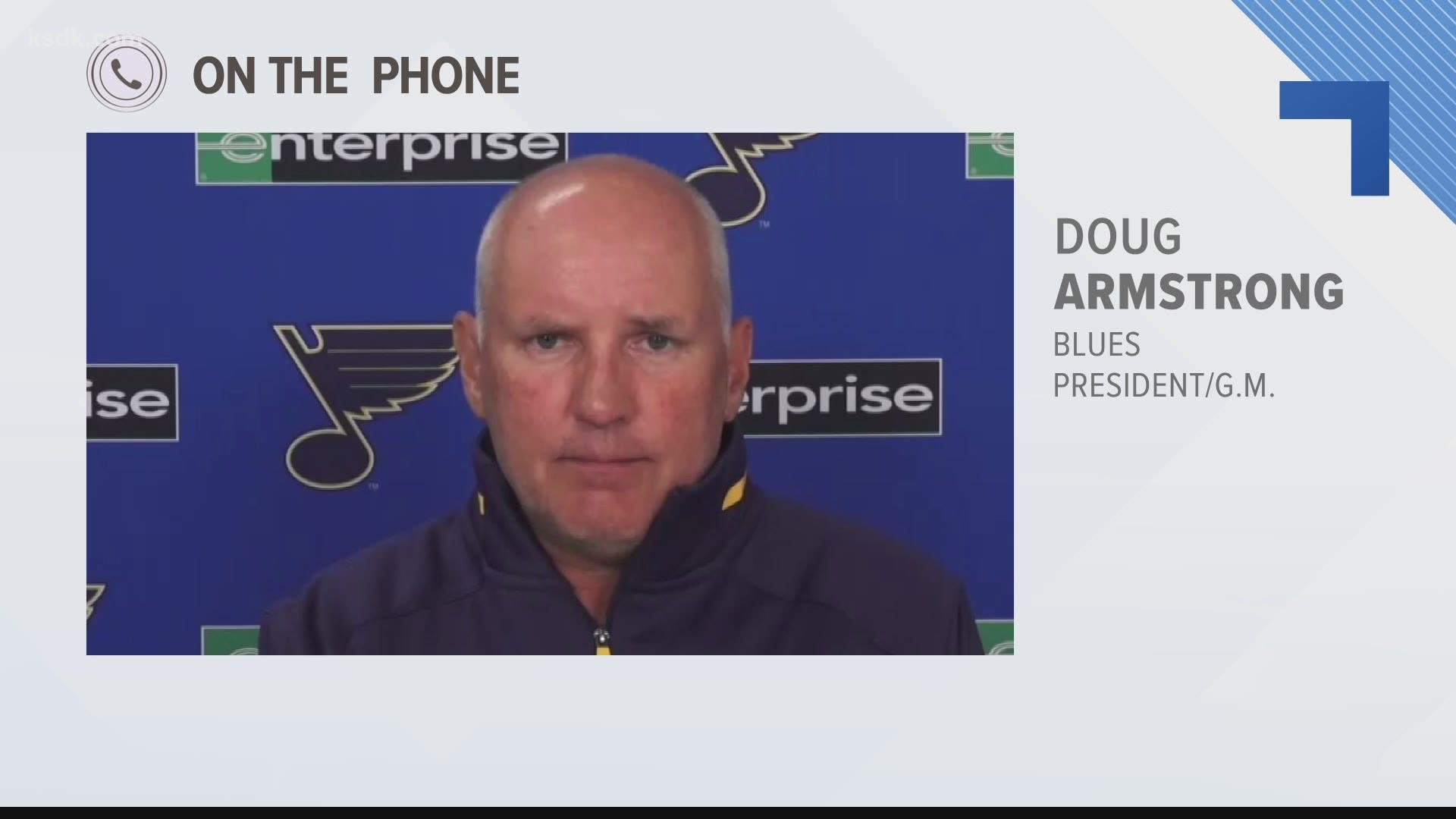 ST. LOUIS — The second day of the NHL Draft can be a long one.

Ask any of the players, particularly this year when the 2020 draft was conducted in a virtual manner, one in which took nearly eight hours to complete.

In the case of Dylan Peterson, the wait wasn't as long as some other Blues prospects on the second day, but long enough.

Peterson, 18, who played for the US U-18 National Team Developmental Program and had eight goals and 17 assists in 45 games last season and another four goals and seven assists in 19 games for Team USA in the United States Hockey League, was excited when told he had been chosen and where.

"Obviously I'm super excited and super stoked to get my name called by the Blues," Peterson said. "It was a long day, but I couldn't be happier with what the outcome was."

Peterson, whose father is a civil engineer, spent much of his early childhood in Taiwan and has moved around the globe quite a bit.

"I was born in California and I lived there only for a couple months," Peterson said of being born in Roseville. "My dad moved my family to Taiwan overseas actually and I lived there until I was four, closing in on five and then he moved us back to Calgary and that's where I started (playing hockey). My dad was always a hockey fan, but up until about the ages of four or five, I hadn't even seen snow or ice or anything like that because I was overseas in Taiwan. When I got back home, my dad got me right into hockey and right into a pair of skates.

"It's funny, the first school I went to was in Taiwan, so I actually at one point spoke fluent Mandarin, but we moved back to Calgary and my mom stopped putting me in classes. It's gone, not a lick. Nothing anymore."

Loof, 18, was in Sweden with his twin brother Linus, also hopeful of being drafted, and watching the events unfold together.

"I'm very excited and I'm very happy to be a part of St. Louis, of course," Leo Loof said. "I think I am a two-way defenseman who plays the puck very well, play physical and make some good plays in the offensive zone, as well."

Loof had two goals and 13 assists in 43 games for Farjestad Jr. of the Sweden-Jr. League.

At No. 119 of the fourth round, the Blues went back to center and selected 6-0, 169-pound Tanner Dickinson, who spent last season with Sault Ste, Marie of the Ontario Hockey League and had 40 points (nine goals, 31 assists) in 64 games.

"Obviously I was looking forward to it. I wasn't trying to think about (being drafted) too much," said Peterson, who received multiple texts from friends to find out he was drafted. "I was trying to keep myself busy, but I'm really excited right now to be with the St. Louis Blues. I'm happy and I'm excited to work hard for the organization and do what I can."

The Blues originally had two picks in the fifth round, but traded one of them (No. 146) to Minnesota for the Wild's sixth round pick (No. 163) and seventh round pick (No. 194). They had a pick at No. 150 and used it to select UMass defenseman Matthew Kessel, who led all freshmen at the collegiate level in goals with seven.

"I started getting some texts and kind of knew from there, but very excited with the news," said Kessel, who made it clear he isn't related to Arizona Coyotes forward Phil Kessel. "I like to think of myself as a big, complete defenseman, just a two-way player who can shut down other teams' top lines and very mobile for my size. I can use my shot to help out offensively as well and I'm good at puck movement.

"The coaching staff here has been great. They got me comfortable right away and stuck me in a good opportunity here. I'd say the defensive part of my game is my strength. Being able to use my size and being mobile, I think I take pride in the d-zone and getting the puck from the defensive zone to the offensive zone and then just going from there.

"I was definitely hoping (to get drafted). I was just going to go with whatever happens. I knew some way it would pan out."

With the 163rd pick, the Blues chose 18-year-old goalie Will Cranley from the Ottawa 67's of the OHL.

Cranley, who is listed at 6-4, 183 pounds, was 18-2-0 with a 2.81 goals-against average and .894 save percentage last season with the 67's and was the backup goalie last season who won the Dave Pinkney Trophy with teammate Cedric Andree for allowing the fewest goals last season.

"I was able to earn a couple games on the back end of the season and our coach put me together with the schedule and I thought that worked out really well for me and I was able to put together a solid second half," Cranley said. "I had that shutout streak (of 159:36). It was really exciting. I've got to give a lot of credit to my team too.

"I came in (to the draft) with really no expectations. I knew my draft stock or whatever, I really tried not to worry about it and not focusing on it. I have a season to focus on ahead here. I'm actually going back to Ottawa to start training again, but I really had no expectations for the draft. I knew I was in a difficult situation for teams just because of the games played or whatnot. I was really happy to get drafted by St. Louis. It's a real honor. ... I had an open mind for sure. I know I had a really good conversation with St. Louis."

The Blues were to have two seventh-round picks but traded one of them (No. 203) to the Detroit Red Wings for the Wings' 2021 seventh-round pick so at No. 194, they closed their draft by taking tall and lanky 6-4, 184-pound defenseman Noah Beck, who will play college hockey at Clarkson University this season after leading Fargo of the USHL among defensemen with 27 points (four goals, 23 assists) in 42 games.

Beck, 19, couldn't believe he would be among the chosen in the draft class after congratulating some friends upon being picked.

"I had practice today and then class right after. I was checking the draft a little bit to see a couple friends' names and sending some congratulations texts," Beck said. "Honestly wasn't really expecting to see my name there, but I couldn't be more excited right now."

And how did Beck find out about himself?

"My teammate pulled me out of class and basically just started video-taping me and all of my friends and family started calling. That's when I found out. My one teammate texted me and said, 'Hey, come watch the draft,' because I think a couple of my teammates had a couple hints, but I walked out and didn't think too much of it until the camera came out. Then I sort of realized and I was sort of shocked. (Being drafted) wasn't really my mindset. I didn't want to be disappointed if I didn't get drafted, so my mindset going in was if I don't get picked, I'm here to focus on my season right now anyways.

"I'm still a little bit in shock shaking a little bit, but I have soaked it in now. It's an honor, hopefully can't wait to get started. A little bit speechless."

The Blues concluded the draft with seven picks after selecting left wing Jake Neighbours of the Edmonton Oil Kings of the Western Hockey League Tuesday with their first-round pick at No. 26.

Amateur scout Tony Feltrin and Dave Ginnell ran the draft after assistant GM Bill Armstrong left last week to take the GM job at Arizona and Feltrin said the Blues accomplished what they wanted despite a long and strenuous day.

"It's an exciting day when you're scouts," Feltrin said. "Everybody's anxious for getting their players' names called out so perhaps a little long on the clock, but well worth the wait from a scout's perspective.

"A good balance for the Blues. Good prospects. Three forwards, three D and one goaltender. I think we've got character kids, kids with skill, kids with size, lots of ability. I think we did better than expected or certainly as good as expected and certainly ecstatic about it.

"We were sitting without a second round pick, so we knew that a number of players that we had interest in wouldn't be there come the third round. Of course the names that were there, we were very excited. And with our first pick, Jake Neighbours, we had an inkling that he could be at our pick at 26 and fortunately for us, he was. I wouldn't say that we were shocked that players were there for us. We position the players as we see them in our eyes as prospects and we're glad to take them in the position that we had."