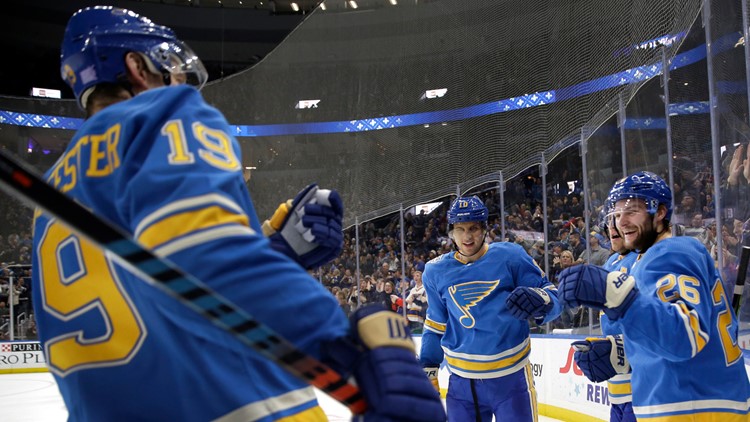 ST. LOUIS (AP) — Justin Faulk and Nathan Walker each scored for the first time with the Blues, and St. Louis beat the Pittsburgh Penguins 5-2 on Saturday night.

Jaden Schwartz had a goal and an assist and Ivan Barbashev and Mackenzie MacEachern also scored for the Blues, who won their third straight game and have points in their last four. Jordan Binnington made 28 saves and improved to 13-4-4.

Sam Lafferty and Kris Letang scored for the Penguins, who lost their second straight game. Matt Murray, playing for the first time since Nov. 7, made 22 saves.

Walker swatted a pass by Schwartz that deflected off Dominik Kahun’s stick in mid-air, and the awkward shot short-hopped Murray to make it 2-1.

Barbashev made it 3-1 with his second goal in as many games, snapping a wrist shot into the upper left corner after taking a feed from Robert Thomas in the high slot at 2:54 of the third period.

MacEachern added to the Blues’ lead when he redirected Jacob De La Rose’s shot from the point at 7:09.

Letang’s shot from the point deflected off Alex Pietrangelo into the net to cut the Penguins’ deficit to 4-2 with 6:57 left in the third.

Schwartz scored his seventh of the year late in the third for the Blues.

Faulk made it 1-0 at the 7:52 mark of the first period with his first goal since April 6. Ryan O’Reilly stripped the puck from Jared McCann and fed it to Faulk, whose wrist shot went off Murray’s right pad and into the net.

Lafferty tied the game 1-1 at the 6:27 mark of the second period. Lafferty used his speed to get past Derrick Pouliot, creating a break-away that was capped by a backhand-forehand move to beat a sprawling Binnington.

It was the first of two meetings in four days between the Penguins and Blues. St. Louis travels to Pittsburgh on Wednesday for their final regular season meeting. ... Both teams were playing their second game in as many nights. ... Pittsburgh LW Jake Guentzel had his seven-game point streak snapped. ... St. Louis LW David Perron and C Brayden Schenn each extended their point streaks to seven games with assists on Schwartz’s goal.

St. Louis: At Chicago on Monday.