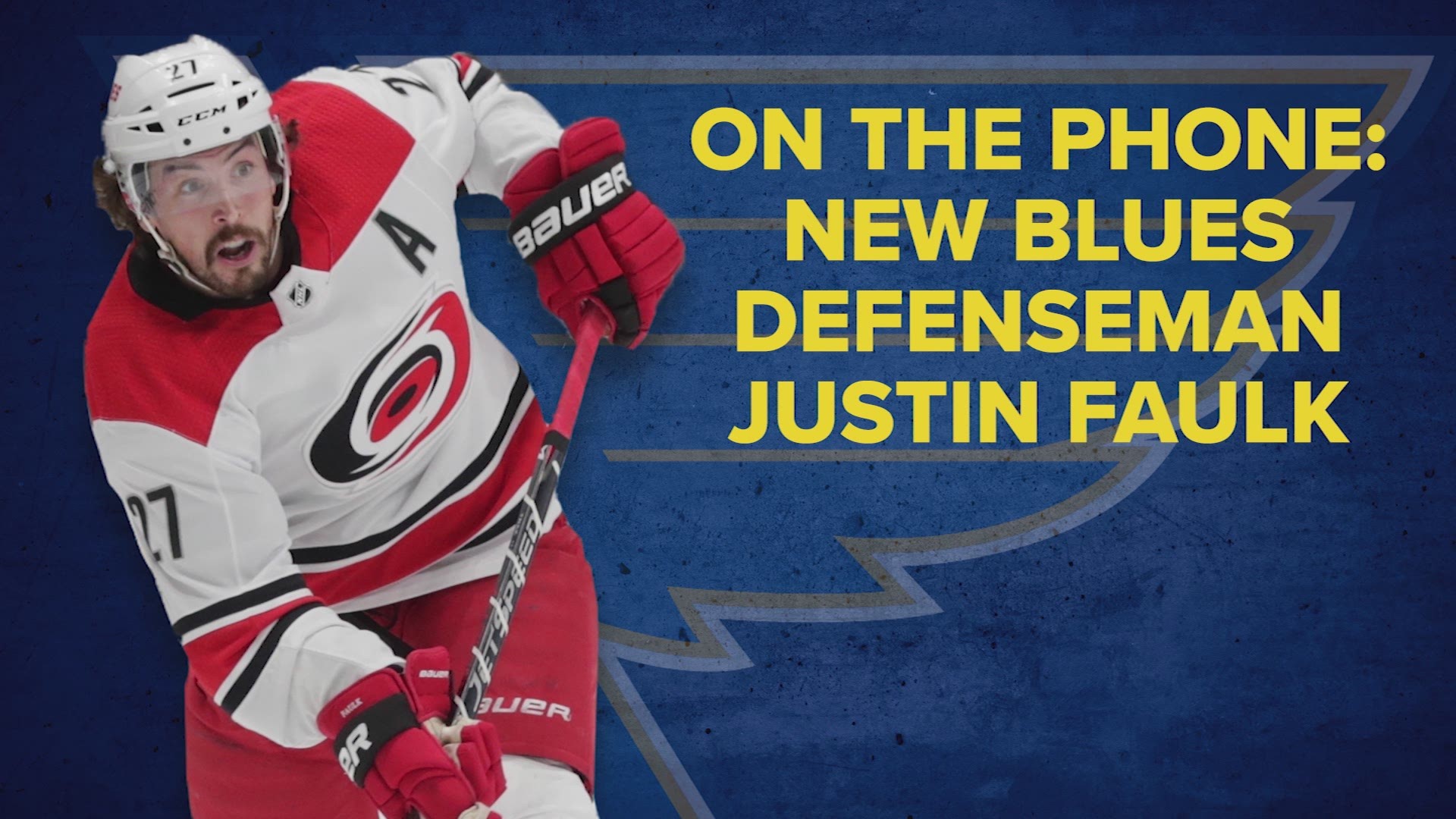 ST. LOUIS — Teammates didn't think anything of it after the morning skate Tuesday.

Joel Edmundson was on the ice, took part in the pregame skate with the group that would face the Dallas Stars late that night. Edmundson left the rink with every intention of playing.

Then he got the call at home, and news filtered throughout the hockey world that the Blues pulled off a blockbuster trade with the Carolina Hurricanes, acquiring three-time all-star defenseman Justin Faulk and a 2020 fifth-round pick for Edmundson, 2018 first-round pick Dominik Bokk and a 2021 seventh round pick

Teammates reacted after a 2-1 loss to the Stars to the news of adding a high-caliber player but losing a close friend that was part of the championship run last season.

Jaden Schwartz is the one player in the locker room that has a history with Faulk, 27, and likes the idea.

"Really good guy," Schwartz said. "We both went to college as freshmen so I played against him when I was 18, 19. Lots of mutual friends. I'm in Minnesota a little bit in the summer, this summer and the summer before. Just a real good guy and a real good player. You see how good he was in Carolina and just an awesome guy, so I was pretty thrilled to see that he got traded here. It's obviously a big pickup and he sounds pretty excited.

"It must have happened quick. You see Joel and maybe it was an hour later that it happened. That's part of the business. Everyone's kind of seen it before and throughout the year. I don't know if you see many preseason ones, but everyone knows that trades are on the table and we were just a little shocked because we didn't hear anything. It just kind of happened."

Faulk said he will come in and get to know his new teammates quickly.

"I've met Jaden Schwartz a few times. We have some mutual friends," Faulk said. "For the most part, I have a few connections, but not too many people that I've had too much interaction with to be honest. I've heard good things about some of the guys on the team. I don't think I'll have a problem fitting in from my understanding and from what I've been told by some people. I'm kind of going in cold turkey and that's also fine with me. Doesn't bother me too much."

Captain Alex Pietrangelo felt the Blues would go make a run at a repeat with the same group back, except for Pat Maroon, that won the Stanley Cup last season, but business is business, and players are immune to it.

"It's always tough when the band gets broken up obviously right," Pietrangelo said "'Eddy' was here for a while, obviously part of what we did last year, so it's always tough in these situations, but we add a pretty good player for us, a guy who's played a lot of games in the league and it just makes us better.

"(We're adding) another puck-moving guy. If you've watched him play, he's got a big shot, can really move the puck and can create some plays. ... I always say this is the hard part of the business, especially after what you went through last year. We're pushing for him in Carolina there. We're hoping for nothing but success, that's for sure."

Center Ryan O'Reilly faced Faulk often when he was a member of the Buffalo Sabres.

"It's exciting," O'Reilly said. "It's a great player that's become a part of our team to make us a lot better. Stuff like this happens and it's exciting for us. It definitely gives us a spark for sure.

"(Faulk brings) tons of stuff. He's such a smart player. The way he moves the puck and the way he creates is just so sound, all areas of the ice. I think it brings a lot of confidence back there and I think it helps on the power play too. He's very dynamic that can pretty much do anything. Definitely makes us a lot better. ... Sometimes the way contracts work, things have to be adjusted. To get that done I think is a huge thing for us. It's not good enough just to win once. You've got to keep going. We want to win every chance we can."

Blues coach Craig Berube hopes to get Faulk, who arrived in St. Louis Tuesday night and was at the game against the Stars, acclimated quick and up to speed with the regular season opener a week away on Oct. 2.

"We'll get him moving here tomorrow, obviously try to get him in a couple preseason games here before it's over," Berube said. "He's obviously a very good player and makes us a better hockey team. ... He's got a good shot. I think he's probably top five in the league in goals for the last four or five years I think. I don't know that stat for sure but something like that."

Faulk's addition, he's a right-handed defenseman, gives the Blues Pietrangelo, Colton Parayko and Faulk the top three from the right side. Robert Bortuzzo is the fourth.

"It's a big piece for us. He's a really good player," Schwartz said of Faulk. "He can defend, he's really good on the power play. He's got a great shot. You see how well he played in that top player in Carolina. I think it gives us a boost. We're going to need him down the stretch. You look at our 'D' now. We've got a lot of different options right now and a really good back end."

Brian Bartlett, Faulk's agent, said the Blues will be happy with the on-ice and off-ice player the Blues are getting.

"As a player, I think he's underrated in his all-around ability," Bartlett said. "His hallmark or calling card is his shot on the power play. He's got 40 career power-play goals. He's right up there in the top five or 10 guys since he's entered the league in power-play goals for defensemen. It's kind of the calling card and the highlight reel, but has had top matchups his whole time in the league against other teams' best players and does a really good job of eliminating scoring chances. He's an all-around guy who can eat big minutes. He's a 23-24 minute a night guy. I think he's going to complement the team well.

"As a person, I think he's going to fit in great into that locker room. He's hyper-competitive, wants to win, likes to be involved in the community. He's a big piece of kind of what turned Carolina into a winning team the last year or so and he's interested in being in a room that's interested in winning Stanley Cups."

And Faulk, from South St. Paul, Minn., is ready to live the smaller-town life that he can get in St. Louis.

"It's nice to have the security and nice to have (the contract) done, that's for sure," Faulk said. "I don't have to sit here and think about it and go through it at all. I had there for a few weeks, but I've heard nothing but good things about St. Louis, about the organization. I've had friends that have played in the organization. I haven't talked to them since, but all their time with the team and stuff, they never said anything bad. When people do sometimes, it sticks out to you and nothing's ever stuck out to me. There's always been nice things, and with the success the team is having, you kind of combine those two things from an outsider and makes the decision a lot easier.

"I'm from Minnesota, from South St. Paul, Minnesota. I spend my summers in Minnesota. I'm not really a guy that would love the big city. I'm still kind of sticking in the Midwest and being a part of St. Louis and enjoying that community seems a little bit easier to me and more enjoyable to me. A lot of parts that went into it and they all kind of came together to make the decision pretty easy."