The banner ceremony will begin at 6:45 p.m. prior to puck drop, then it's time to be the defending Cup champs and look to repeat. 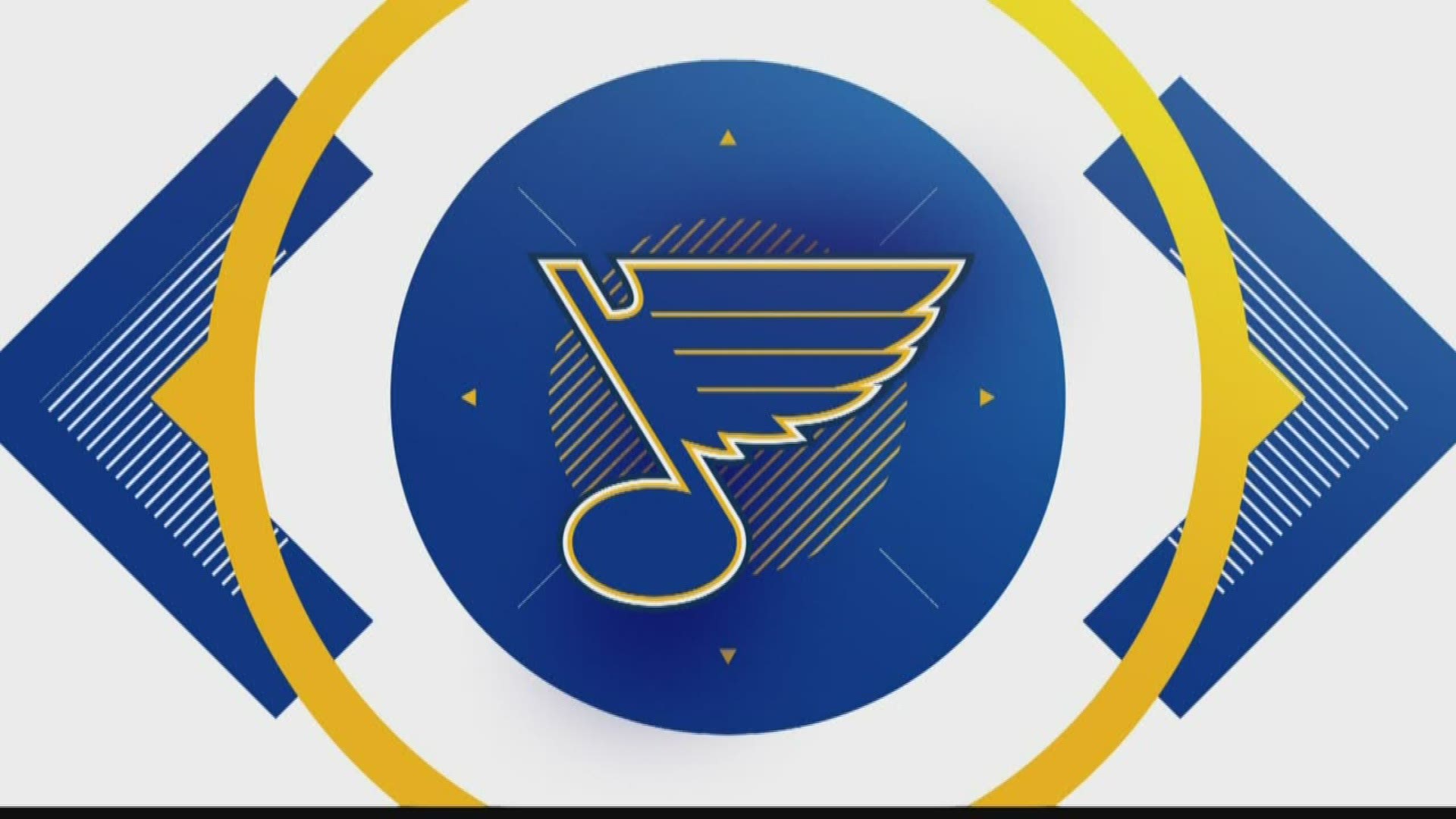 ST. LOUIS — The time has come for the banner to go up, celebrating the Stanley Cup championship for the St. Louis Blues, then it's time to get the 2019-20 season underway when they host the 2018 Stanley Cup champion Washington Capitals (7 p.m.; NBCSN, ESPN 101.1-FM).

The banner ceremony will begin at 6:45 p.m. prior to puck drop, then it's time to be the defending Cup champs and look to repeat and be the first since the 2016-17 Pittsburgh Penguins to do so and just the third since 1998 (Detroit Red Wings).

"Obviously it's going to be a little emotional at the beginning," said Blues goalie Jordan Binnington. "We did something very special and should be proud of it, but come puck drop, we've got to kind of turn that switch on and get back to work. We know how hard it's going to be every night and we're prepared for that."

Blues coach Craig Berube, who had his interim tag removed in the summer, said the team is focused and ready for the challenge the Capitals bring.

"We've had enough practice," Berube said. "Throughout camp, we had good practices. I really feel like guys were focused and working hard and doing all the right things.

"They've got some real good players over there, we know that. They've been a good team for a long time. I don't expect them to be any different. Even with [Evgeny] Kuznetsov out, they've still got a lot of dangerous players, offensive players, good power play. They're a big heavy team, it's going to be a battle."

Binnington will make his first season-opening start Wednesday. He was 24-5-1 with an NHL-leading 1.89 goals-against average and .927 save percentage after bursting onto the scene when he made his first NHL start Jan. 7, a 25-save, 3-0 win at the Philadelphia Flyers.

Binnington began last season as the backup to Ville Husso with San Antonio of the American Hockey League, so the difference between last year and this year is rather large.

"I think I was on the bench, in San Antonio probably," Binnington said. "We were in training camp or something."

Binnington will be playing in front of a packed house tonight, but last year?

"I don't know, I'm not very good with this, but like a couple thousand [people] maybe," Binnington said. "I'm aware of... Things have changed. I like new things and being able to adapt, accept new challenges. It's part of life and something to enjoy. I'm looking forward to this upcoming season here."

Robby Fabbri gets the nod in the lineup Wednesday over Zach Sanford and will play on a line with Tyler Bozak and Robert Thomas.

Fabbri, as has been mentioned a time or a thousand, is coming off his first full season following two knee surgeries to repair a torn left ACL. He's found his quickness and speed again and hopes to keep building off what he was able to accomplish in the summer after a very up and down first season back.

"I feel like I'm back to where I was when I was last in the opening night lineup and it's just something to build off," Fabbri said. "Hearing that from the doctors, I always thought I was going to be stronger than that, better and quicker, but I found out pretty fast that they're right. Coming back from both knee surgeries was tough to get back into a groove, but I feel great. It's not even on my mind anymore. That's a confidence-builder right there and I've just got to go out and do my thing.

"I think I found (another gear) in the playoffs last year and that was nice going into the summer knowing that I felt like I was getting faster. I still want to get faster. There's always things you can improve with the way I play my game, and that's a part of it. Feeling fast right now gives me confidence. Just working on it's going to help me even more," Fabbri said.

Robert Bortuzzo gets the nod in the opening night lineup over Carl Gunnarsson, and barring injury, expect the two of them to rotate in and out of the lineup as the sixth and seventh defensemen.

Berube wants Bortuzzo in there against the Capitals to defend against Washington's power play and to add some physicality in a lineup that features Tom Wilson and Garnet Hathaway.

"It depends on how that looks, too," Berube said. "With 'Petro' [Alex Pietrangelo] on the left, it's going to be a game-to-game process for a while and see how it all plays out.

"I think probably the biggest reason for me, and all our D are going to play, and they're all important guys, but 'Borts' is a good penalty killer, they've got a good power play, he eats that shot over on the weak side with [Alex] Ovechkin, [Patrik] Laine and different teams we play. He's done a real good job off that. We need some heaviness in there tonight. They're a hard team to play against a big team, a physical team. He adds that element," Berube said.

"Guys get traded and move around," Berube said, "and sign with new teams. They fit in pretty easily. Most guys do. He's no exception. He's fine."

Former Blue and Capitals forward T.J. Oshie was all smiles in the locker room Wednesday, and for more reasons than one.

Oshie will be the proud father of a third child, a boy (his first), but he spoke of his genuine happiness for his former teammates, guys he played with here, including Jake Allen, Vladimir Tarasenko, Pietrangelo, Carl Gunnarsson, Fabbri, Jaden Schwartz, Jay Bouwmeester, Alexander Steen, Colton Parayko and David Perron.

"I don't know if they remember, but I talked to quite a bit the night they won," Oshie said. "It was morning where I was. I was on my way to the golf course actually, but there were basically all the guys that played here when I played. It was a really cool moment and glad they were able to take a couple moments to say hi to me and for me to congratulate them when they were probably at the peak of their celebration."

"It's always special being back, maybe a little more special that they get to raise the banner tonight. Really proud of the guys over there and happy for them, excited to get the new season along the way. Tonight's a big night for both sides," Oshie said.

Oshie, who was drafted by the Blues in the first round (24th) of the 2005 NHL Draft, spent the first seven seasons of his NHL career here with the Blues before getting traded to Washington after the 2014-15 season for Troy Brouwer.

Oshie was always passionate and wanting to be a part of a Stanley Cup-winning team here but is really happy for the city that embraced him and his family when he first got here.

"I spent a large part of my life here," Oshie said. "I was treated very, very well by the organization, by my teammates, trainers and especially the fans. When they were able to get the job done and knowing how that feels to finally do it and another place that had never won the Cup before, I was very, very happy for everyone that stuck it out. I know a lot of times they do the season-ticket holders thing where you stand up and you go all the way back to '67. Pretty cool for all those fans who have shown support and finally got the Cup, especially the players that have been grinding it out for a while who were always searching for a way to get the job done and they finally did."

* Tarasenko has 10 points (eight goals, two assists) in his past eight games against the Capitals.

Zach Sanford, Carl Gunnarsson and Mackenzie MacEachern are healthy scratches. The Blues report no injuries although Jordan Kyrou (knee) is skating with the team and is on injured/non-roster.

Braden Holtby will start in goal; Ilya Samsonov will be the backup.

Healthy scratches include Tyler Lewington and Travis Boyd. Michal Kempny (hamstring) is out and Evgeny Kuznetzov is serving the first of a three-game suspension.

RELATED: Can the Blues do it all again?

RELATED: 'It was nuts' | Blues blown away by championship rings