"You lose a couple in a row, you're trying to change the momentum," said Blues defenseman Alex Pietrangelo.

MARYLAND HEIGHTS, Mo. — A little home cooking went a long way in helping cure some ails in the Blues' game.

When they limped home following a 5-2 loss at Buffalo that produced the first three-game losing streak in regulation in more than 13 months, the Blues (22-8-6) did what they normally do best: nip it in the bud and get back on the winning track.

"You lose a couple in a row, you're trying to change the momentum," Blues defenseman Alex Pietrangelo said. "It's always nice to come home. You're on the road there for a while. It was nice to come home and kind of take a mental break from being gone for so long. I think everyone feels a little bit recharged now and have a chance to get home and see our families, sleep in our own bed and kind of get in a routine again."

The Blues outscored the opposition 16-8 and they did it with solid goaltending from both Jordan Binnington and Jake Allen, they did it with a defensive structure known to be smothering and they got timely goals from key people as well as some depth scoring.

It all added up to the third winning streak of four games or more and has the Blues atop the Western Conference with 50 points, 16 points better than where they were at this time last season (15-17-4).

"I think one of the best things we're doing is we're taking it one game at a time, and we still haven't been perfect," Blues center Ryan O'Reilly said. "There are still mistakes that we're making and our plan, I think, is to keep building for the playoffs. We have to get to our best game and continue to grow every day. When we do the right things, you can see we're able to find ways to win games, and obviously our goaltending's been outstanding, helped us out a ton. When we do the right things, we give ourselves opportunities to win and we've got to keep growing. It's not going to get any easier on us and we have to keep getting better.

"... At times, we're close. We're close to our best game. It's never going to be perfect, there's always going to be a little ditch, but we're responding well within the game and finding ways to adjust and respond."

The Blues used Thursday's practice before jetting off for a two-game trip to California to take on San Jose Saturday and Los Angeles Monday before the Christmas break to get in some skill work done inside before heading outside to the outdoor rink to The Barn for a little 3-on-3 play.

Coach Craig Berube rewarded the players for a fine week of hockey with some fun while getting the work on. But even as a coach, there are things he'll worry about. 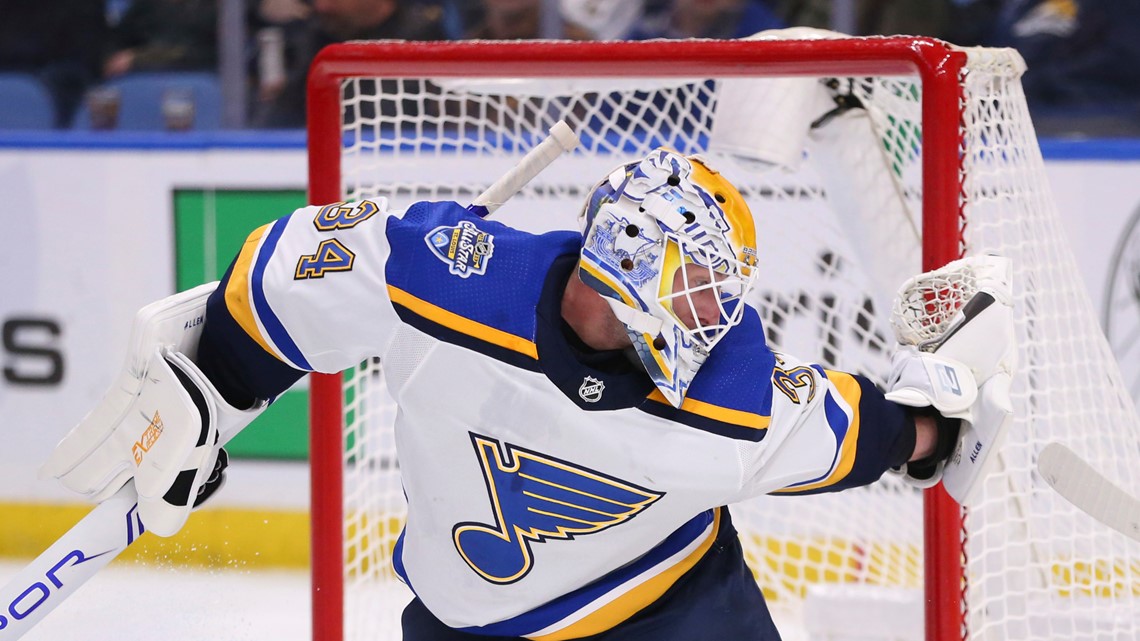 Against the odds, Jake Allen continues to prove his naysayers wrong
ST. LOUIS - At one point in his career, Jake Allen ranked near the bottom of the league in NHL starting goaltenders. This was two years ago. I wrote that he was at best, a timeshare goaltender. Someone who couldn't carry the load of an entire season with a team.

"There's always concerns, there's always things you want to get better at," Berube said. "It's just a day-to-day, game-to-game stuff. We always try to retool our guys and dial them back in to do certain things better. But last two games to me were pretty good. Playing two high-end teams with really high-end skill and I thought that we did a real good job of shutting them down, keeping them on the outside, playing a real good team game. When we play like that, we're a real hard team to beat."

That high-end skill included limiting Colorado's MacKinnon (one assist) and Connor McDavid and Leon Draisaitl (one assist), who have combined for 169 points this season, to two assists, and O'Reilly drew the assignments as the shutdown line to help thwart those stars.

"I think for us, it helps find the simplicity when we know we're playing these big guns, they play a ton of minutes, they're going to be out there a lot," O'Reilly said. "I think it really helps narrow our focus on our mindset defensively. I know for myself, I'm not worried about trying to create. I need to play hard and make it tough on these top guys, and you can see we put ourselves in a good spot. Everyone kind of has that mindset if we play a good, defensive game."

That defensive game includes, for the Blues, playing tight as a five-man unit.

"We're playing as five, right," Pietrangelo said. "You've heard us say it before, if we play as five, we're tough to beat. When you have guys like we've faced these last couple games that can beat five guys by themselves, you need five guys to jump on the coverage and everyone's buying into that process. When you have that mindset throughout your lineup, it's easy to defend."

The Blues have maintained that Binnington is just getting some much-needed rest and made no mention of any ailments.

Binnington has started 26 games this season, which was the second-most among starters this season, with Allen only making his 11th appearance and 10th start against the Oilers.

"I think he's played a lot this year and obviously going back to last year in the playoffs, short summer, I think we're managing him pretty well," Berube said of Binnington. "'Binner' probably wants to play every game, just like every other player, but we've got to make sure that he's rested and he's feeling good. That's important. Like I said all year long, we need both goalies, and we're getting good goaltending from both goalies."

For the record, Berube said he hasn't decided who will be the starter Saturday against the Sharks.

As for forward Ivan Barbashev, who's missed the past two games with an upper-body injury, he skated Thursday and is geared to return on Saturday.

"He felt good today, so we'll see how he does tomorrow," Berube said. "... I think it is (a possibility for Saturday). It looks like it is right now, but I can't make that determination until I see him tomorrow."

Forward Tyler Bozak, who missed the game Wednesday after showing up to the rink sick, did not practice Thursday, but Berube said he'll skate tomorrow. If he does, look for him to play Saturday.

"Bozie will be fine," Berube said. "He'll come in tomorrow and will probably go on the ice a little bit. We'll see how he feels, but he's feeling better today."

Forward Mackenzie MacEachern, who scored his third game-winning goal of his young career Wednesday. has an upper-body injury and did not practice Thursday. Berube said it's nothing related to Wednesday's game and more something that's been bothering MacEachern, who has six goals in 29 games.

"We'll re-evaluate him tomorrow," Berube said. "He's had something nagging him, so we're taking a look at it. We wanted to keep him off today and then we'll see how he is tomorrow."