2 dead, 15 reportedly injured in shooting outside bar after Chiefs win in KC 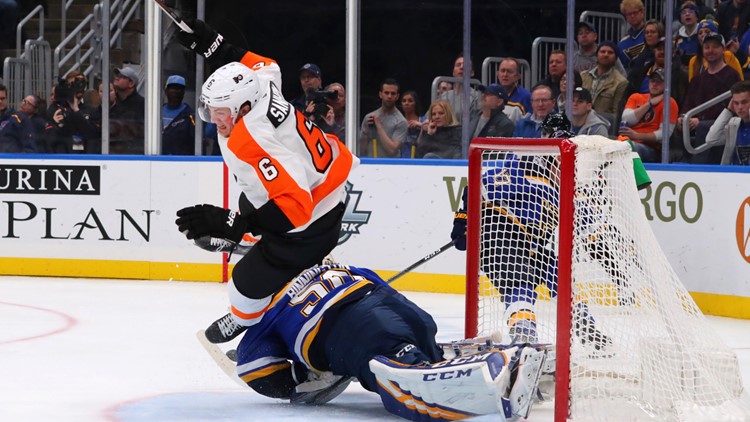 Blues storm back against Flyers in 3rd, fall in OT, 4-3

ST. LOUIS — The Blues' home winning streak came to an end on Wednesday in a 4-3 overtime loss to the Philadelphia Flyers.

All good things are bound to end sometime, and it did on this night for the Blues, who couldn't set a franchise record with their 10th straight home win and sweep a homestand of at least five games for the first time ever.

What is paramount regarding this group is its propensity to never fall out of contention, and it could have happened when Travis Konecny scored a power-play goal 26 seconds into the third period and make it 3-1.

What's even better is that even though the Blues battled back and got a point to move into first overall in the NHL standings, when all things pointed to another of those improbable comebacks that didn't materialize, they're not satisfied with anything but the ultimate result.

"It's a great homestand, no doubt about it," Blues coach Craig Berube said. "But listen, we want all of it. We're not happy with this performance, but I'm happy with the battle back and getting a point."

This is the Blues (30-10-8) of today. They have this perfection mindset, and this is how winning teams -- championship teams -- think.

The execution over 60 minutes is not always going to be perfect. There's an opponent with the same goal in mind, but achieving the end result is always what they're thinking no matter what the situation.

"I don’t reflect too much on previous games. It’s this one," said Blues center Ryan O'Reilly, whose goal made it 3-2. "This is frustrating. We’re a better team than what we showed tonight. It’s disappointing. We could’ve had an extra point. I don’t think anyone’s happy. We need a response going into next game. Tonight wasn’t good enough."

Most teams would be gushing about making such a comeback, and don't get a misconception that the Blues aren't happy they were able to come back. They were, but once again, this is an end-result mindset that they've created, and they always feel they should be leaving the ice with a win.

"It's a good homestand, but we feel we could have played more solid throughout the 60 (minutes) tonight," said Blues forward Alexander Steen, who had a goal and an assist to give him eight points (four goals, four assists), "so we'll look at that tomorrow and our main goal is to improve every day and take it day by day and we've got a big one against Colorado coming up."

What ailed the Blues tonight was some sloppy play from the midpoint of the second period to the conclusion of it when the Flyers (25-16-6) took a 2-1 lead on goals by Tyler Pitlick and Michael Raffl. Their power play was only 1-for-6, including another poorly executed 5-on-3 that lasted 1:41, and one final sloppy line shift in the OT that led to Jakub Voracek's goal.

It wasn't the bad line changes that ultimately were the cause of the defeat. It may have been the final nail when Jaden Schwartz inexplicably left on a line change and the Blues got caught on a 2-on-1, but the inability to make smart decisions with the puck is what built up to a plethora of errors in the extra session.

"Three-on-three, we really didn't have the puck enough," Berube said. "... Some not very smart plays with the puck, I'll tell you that. You've got to control the play and you've got to be patient 3-on-3 sometimes. Sometimes it takes two- or three-line changes before you get a good look and we didn't do that. We forced it and forcing plays, they protected it and got it back and then you give it to them. They're a good overtime team. They've got some pretty skilled guys out there. We've just got to be smarter about that."

"Tonight for me, there was no assertiveness in what we're doing," Berube said. "You've got a 5-on-3, but what did we have, one shot on it? Petro shot one, missed the net. You've just got to read what the other team's doing and you've got to just take what they give you and shoot pucks. I've said it before, we do not shoot enough on the 5-on-3, and we did not shoot again tonight. That's it. That's all I have to say about it."

"We have to make some adjustments," O'Reilly said. "I know myself, I have to find a way to be better, create more and be more of a threat. Yeah, that could’ve changed the game for us and gave us the momentum we needed. It’s disappointing and I’ll take responsibility for it."

The Blues, who had a 1-0 lead on Justin Faulk's first-period power-play goal, had multiple opportunities to make it 2- or 3-0 but failed to capitalize and left it at a one-shot game. The Flyers became more assertive and when they grabbed the lead, it was game on.

But all in all, most teams don't overcome such deficiencies. This Blues group tends to find a way, and bottom line, they found a way to salvage something, and that's what we'll say in this space, salvage, because that's their mentality.

It was good, but not enough.

"Yeah, definitely, we’ll take that," said Blues forward Robert Thomas, who had two assists. "It would’ve been nice to close it off with a win here, going into break and kind of keep that momentum going. But we’ve got a big game in Colorado and they’re fighting and trying to catch us, so we’ve got to be sharp."

MORE ON THE BLUES