Blues' Thomas wants more responsibilities, and he's getting them

MARYLAND HEIGHTS, Mo. — Part of the pace drills that Craig Berube and Blues coaches have implemented this week in training camp is to get players up to speed and in playoff form once the games begin for real Aug. 1.

Blues center Robert Thomas, for the most part, has made these intense drills look relatively easy.

Let's not put the 21-year-old on that pedestal just yet with the group of NHL superstars around the league, but it's becoming quite clear that things are clearly looking up for the Aurora, Ontario native.

"That's definitely my mindset is that I want more," Thomas said Friday. "It's kind of what pushes me every day to work hard or get better, learn a little bit more about the right way to play and kind of bring little things to my game every day. That's something I'm hungry for and every day I keep on pushing to try and get more responsibility and be a bigger part.

Thomas, who had 42 points (10 goals, 32 assists) in 66 games this season, has all but supplanted veteran Tyler Bozak as the third-line center, although having two viable options at center on a line with Sammy Blais gives the Blues multiple threats.

"At some point, you've got to put people in situations to either succeed or fail," Berube said. "You can't just say, 'Well, he's not ready yet.' We talked about this in the summer time about getting him in the center ice position. I even talked to Bozak about it at training camp and maybe even before camp, I think, about what I was thinking with him. Bozak was all for it. He loves playing with the kid whether he's at wing or center. And it's nice having those two guys together because Bozie, he can jump into the face-off circle any time and it's nice to have two smart center icemen on the same line like that. After the surgery and his injury and then getting going at camp, it took him a little longer because of the injury throughout the summer. Once he got up to speed, we put him right in the middle of the ice and I thought he's done a great job."

Thomas started the year a bit slow but he had offseason wrist surgery stemming from the Stanley Cup Playoffs last season but once he got going after a goal in his first eight games, the points were adding up at a quicker pace.

"The second half of the year there I really started to feel it," Thomas said. "Like you said, (the game) kind of slows down for you. You can kind of hold onto the puck a little bit more, make the plays you want to make and be more confident with it. I think that's definitely starting to come. I still think I've got a long way to go though.

"I've played center my whole life. Pretty much last year was the first time I'd ever played wing. That was a bit of an adjustment for me. Now being back in the middle. I definitely feel more comfortable being back where I usually am in the same situations I'm comfortable with. Definitely a lot of familiarity with that."

Thomas, the 20th pick in the 2017 NHL Draft, is listed as 6-foot, 188 pounds and he continues to grow. When Thomas first entered the league in 2018-19, puck protection was one key area he has drastically improved on. Now the puck just sticks to his stick, he's poised with it, patient to make the proper play and doesn't give it back easily.

"Tommer's still a young kid," Berube said. "He's got a lot of room to grow yet. You're going to see a lot of improvement with him going forward. He's still got a lot there that he can give a lot more, and that'll come with time. I just think we've got to be a little patient here.

"Where he was coming out of junior, and really, no time in the minors. He learned here in the NHL. That's not an easy thing to do. I think that we brought him along a certain way and I think that's helped him become a better player. Even putting him on wing early on (in his career) is important because that center ice position is a tough position. You've got to be 200 foot all the time, playing low in your own end, but he's learned, he's a smart kid. He watches other guys like (Ryan) O'Reilly, Bozak, (Brayden) Schenn and these guys, he watches these other centermen and he learns from them. It's nice to have guys like that around him with good leadership that are helping this kid out, but he's a fast learner. He's come a long way this year for me. Being at that center ice position and seeing some of the games he's had this year and what he's done, he's played really well."

Thomas, who had 33 points (nine goals, 24 assists) in 70 games as a rookie, knew all along that if he stuck with what was asked of him, he would continue to grow and felt the transition was gradually moving along despite some ups and downs along the way. But the bottom line is was to keep growing and to continue to do so moving forward.

"I think it's definitely a step in the right direction," said Thomas, who lived with former Blue Keith Tkachuk his first season in the NHL and is good friends with Matthew and Brady Tkachuk. "I think through all of this year, I started to take some good steps. I was more responsible in the d-zone, I was making smarter plays. I definitely think I've come a long way from where I was at he start when they put me at center. I've still got a long way to go, but it's a nice feeling of confidence when I came back and they still had me at center." 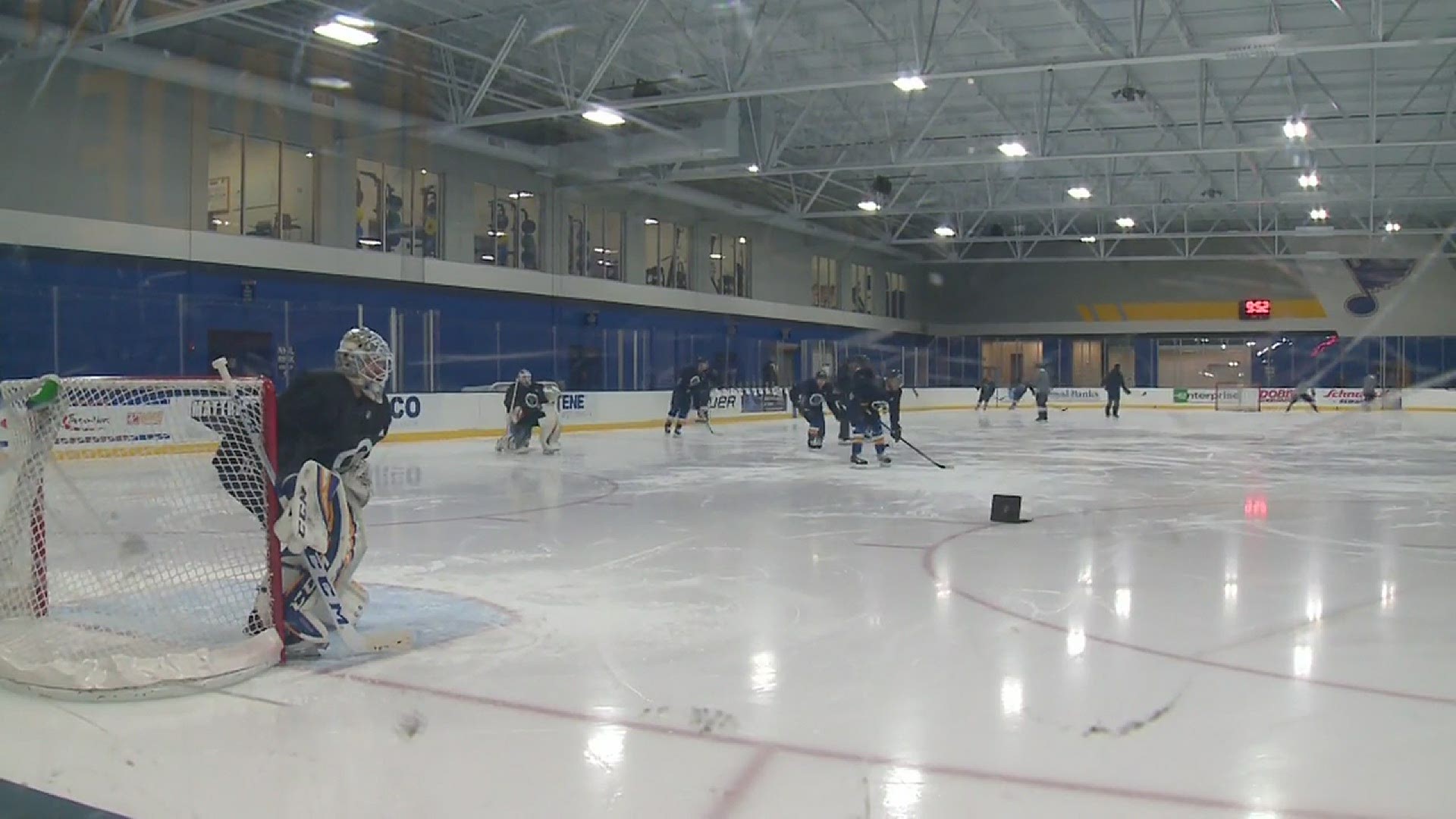