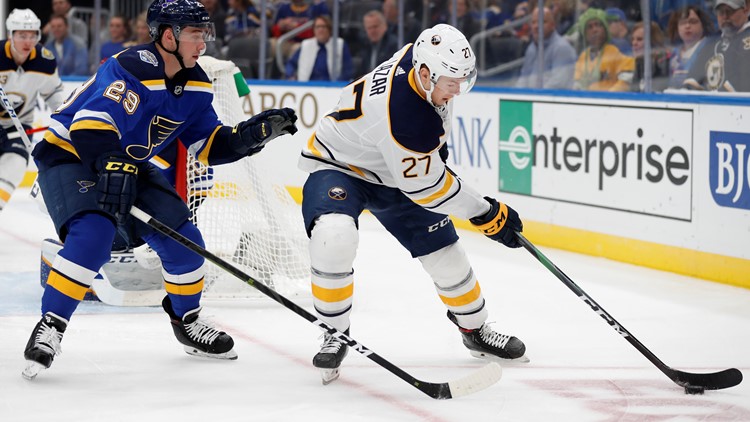 ST. LOUIS — It's been stated often enough from coach Craig Berube and general manager Doug Armstrong touting the Blues' depth and what it means for the success of this organization.

It's been stated often enough that at times, it's gone through one ear and out the other in the past.

However, the Blues' run to a Stanley Cup last season was predicated upon using that depth and rolling with it through a grueling and rugged playoff run.

Those waiting for the Blues' Stanley Cup hangover are well into January now ... and still waiting.

Judging by Thursday's 5-1 win against the Buffalo Sabres to run the Blues' record to a Western Conference best 28-10-7, it could still happen, but this group continues to show poise and determination in search of a repeat championship.

What's been most impressive about this run is the amount of hits the Blues have taken thus far this season, yet they're still able to plug-and-play guys without skipping a beat.

There have been hiccups, yes, but how many teams can absorb a loss of their leading goal scorer [Vladimir Tarasenko] and key forwards Alexander Steen, Oskar Sundqvist and Sammy Blais along with defenseman Carl Gunnarsson and not stumble?

It's impossible, right? Well, the Blues continue to defy those odds, much like they defied the odds going from worst to first last season.

"We got four lines, we use everybody. Six D," Berube said. "... I think that’s how we’re built. I really believe that. Yeah, there’s times when we need some goals, we’re going to use certain people in situations. But we’ve been running four lines for quite some time here. And everybody contributes. It’s not one line all the time. Everybody contributes. I’ve said this all year long we’re going to need contributions from everybody and we’re getting them."

When Tarasenko went down to a dislocated shoulder on Oct. 24, who was going to replicate the 30-plus goals he puts up on a regular basis? Hello David Perron, who scored his 19th Thursday and should be a slam-dunk for the 'Last Men In' Vote and be a Central Division All-Star, but that will be determined on Friday.

To a certain extension, Klim Kostin and Jordan Kyrou were recalled to help alleviate that void, and Kyrou is the one playing alongside Tarasenko's linemates, Brayden Schenn and Jaden Schwartz.

Steen's high ankle sprain came on Nov. 6, and it was that night that Jacob de la Rose was acquired from Detroit for Robby Fabbri, and after being a healthy scratch earlier in the season, Mackenzie MacEachern has been a mainstay in the lineup with 38 games under his belt now.

Blais sustained a wrist injury Nov. 19 that required surgery and put him out 10 weeks. Enter former Blue-turned current Blue Troy Brouwer, who was signed to a $750,000 contract to come and add veteran leadership and depth. Zach Sanford, for all his ups and downs, has been plugged in and out of the lineup. Some results have been effective, some not.

Sundqvist injured his ankle Nov. 28 and missed six games, Gunnarsson went down to a left arm injury Dec. 12 that opened the door for Robert Bortuzzo to be a more bottom six pair guy and the team's most effective penalty killer. And then there's Niko Mikkola, who's impressed beyond what the Blues have expected for two games now with Colton Parayko out of the lineup the past three games.

Robert Thomas and Ivan Barbashev have missed games due to injury.

Doesn't matter. The Blues move on with what they have and rely on all comers, and on nights when they've seeded them, Jordan Binnington and Jake Allen have manned the cagewell and supplied that last line of defense.

"Yeah, I think that's definitely been a strength of ours for a number of years, but especially recently, and when you have goaltending like we have and guys that get plugged in," said Steen, who scored his first two goals of the season Thursday and combined for nine points with linemates Thomas and Tyler Bozak. "I think Mikkola's done an incredible job the two games he's been up here and playing, gets his first assist tonight. I think Bortuzzo's been an unsung hero for us. His shot blocks, they aren't easy to do, and he does it with a smile on his face. There's a lot of great stuff going on for sure."

It really is insane to think what the Blues are doing is for real, but it is. Teams have collapsed when losing some of their key guys, but not this bunch. They're built to win, and they're built to endure the long and grueling haul that an 82-game regular-season and possible 28-game playoff season brings.

"That’s our key to success," Thomas said. "We did it all of last year, well, half of last year. But that’s the way our team is built. Every night someone else seems to be stepping up and that’s what it takes to be a great team.

"We just keep coming on teams. We play the right way. It seems like an endless forecheck, endless pressure and that’s our identity. And when we’re doing that, we’re a tough team to beat."

Thursday, it was what's dubbed the third line of Steen-Thomas-Bozak, which combined for four goals and five assists. It was effective, playing in the Sabres zone and creating around the net.

The Blues didn't rely on Schenn and Schwartz to carry the load, or O'Reilly and Perron to do the heavy lifting.

They have their nights, as Berube said, where the Blues will look to their go-to guys to take on that burden, but Thursday, it was the aforementioned trio, with Steen getting two goals and an assist to go along with a plus-4 rating, and Bozak and Thomas each collecting a goal, two assists and a plus-3.

On another night, it can be the MacEachern-Barbashev-Sundqvist line.

And then there's the third D pair of Mikkola-Bortuzzo, which was a combined plus-6 (plus-3 each) and played the game in key situations.

"I think Mikkola and Bortuzzo had a nice game tonight," Berube said. "Plus-3; Mikkola got an assist. They’re two big guys that make it difficult for the other team to play against."

It's what's making the Blues so fun to watch and watching those that play all get key, complementary roles.

"I think we have a ton of depth, you need every line to chip in and you can’t rely on your top guys to get the job done every single night," said Bozak, who has seven goals the past 11 games after three the first 33. "You’re going to have to chip in, us third and fourth line guys, we have to do our job and chip in on nights like this to help the team win and that showed last year too with our depth, throughout the end of the year and in the playoffs that we had a lot of people contributing."

They have seemed to pick up right where they left off, and that bodes well for another deep postseason run this year barring any more unforeseen circumstances.

At some point, the injured guys will return, and the Blues will have tough roster decisions to make, and the guys that have been inserted in to fill those gaps will not want to relinquish those roles.

But as the old saying goes, 'It's a good problem to have.'