If there is one player that appreciates the fact he gets a reprieve and a chance at redemption, it's Faulk, who finished with just 16 points this season

MARYLAND HEIGHTS, Mo. — Justin Faulk wasn't going to shy away from the inevitable.

His first interview in a media scrum, well sort of, because it was done in Zoom format, was going to include questions about his first season with the Blues after spending his entire career with the Carolina Hurricanes, and by the 27-year-old's own admission, it wasn't good enough.

Faulk, acquired Sept. 24 from the Hurricanes along with a fifth-round pick in the 2020 NHL Draft for Joel Edmundson, prospect Dominik Bokk and a seventh-round pick in the 2021 NHL Draft, came to the Blues with expectations that he could be that offensive driving force that was his staple with the Hurricanes for eight seasons and help fortify a Blues defensive unit even more.

But for a variety of reasons, including moving to a new team already firmly set with a lineup that just won the Stanley Cup, along with a new system and new style that didn't bring forth immediately some of those loftier aspirations, things just didn't play out the way Faulk and even Blues fans had hoped.

"I just didn't play well at times," Faulk said Tuesday. "I'm not scared to admit that. It would (have been) nice to get a couple (more) goals. I've been in a situation where, or you see other guys in situations where just because you're scoring, it means you're playing well, and that's not always the case. I've been on that side where I've scored goals and also not played very well at the same time. I personally just think I didn't play all that well. I've got a nice chance to rebound here and finish up this season and keep going forward. Obviously I'm supposed to be doing this for a long time here, so we want it to be well."

If there is one player that appreciates the fact he gets a reprieve and a chance at redemption, it's Faulk, who finished with just 16 points (five goals, 11 assists) in 69 games this season, or just 0.23 points per game, the lowest average point total in any season. It's his lowest point total since his second year in 2012-13 when he had 15 points (five goals, 10 assists) in just 38 games.

Faulk, who returned to his home state of Minnesota immediately after the NHL pause and spent roughly four months up north, had plenty of time for reflection.

When Faulk was acquired, the Blues wasted little time signing him to a seven-year, $45.5 million contract extension ($6.5 million average annual value); this season was the final of a six-year, $29 million contract ($4.833 million AAV) signed with Carolina March 24, 2014. 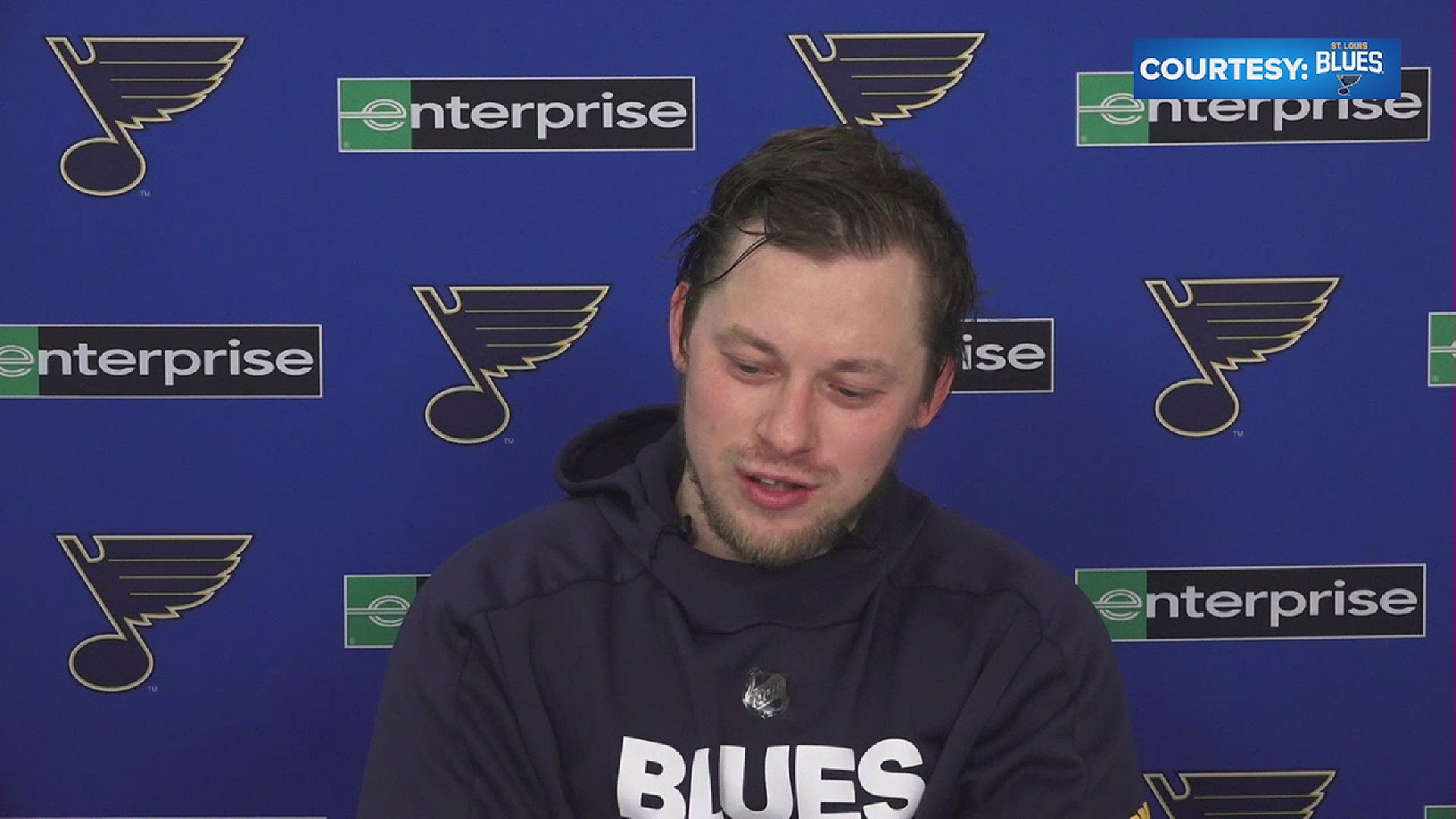 The Blues signed him to make sure there was someone in place as security should captain Alex Pietrangelo move elsewhere when he becomes an unrestricted free agent at the conclusion of this season, but finding the right fit for Faulk seemed, at times, to be challenging.

With Pietrangelo and Colton Parayko as the top 1-2 right-handed defenseman on the team, how much more time could there be for Faulk, who was playing the right, then put on the left at times out of necessity. He started the season on the power play but with little to no production (one goal, two assists) on the man advantage, was phased down the ladder, and Faulk, who averaged 23 minutes 16 seconds of ice time with the Hurricanes for eight seasons, played a career-low 20:34 in his first season in St. Louis.

This is a guy that was used to getting top everything in Carolina.

"I think just getting used to how things work in a different situation," Faulk said of the adjustments to St. Louis. "I was in one place for eight years and I was kind of in a position to not necessarily dictate how things go, but have a say in stuff so you kind of walk into a new situation and you get a feel for the guys and how their life is in the room and how things work. Just getting used to that is probably the only thing. It's hockey, the guys are great. You walk in any room, there's always ... I would say 99 percent of the guys in this league are good dudes. They make it easy on guys all the time. That part was pretty easy.

"I don't know the exact stats on what the power play time was, but I would have assumed it was probably towards the lower end, but I had opportunities. I was on it at the beginning there for a while and just didn't perform or produce anything. When you have guys that can step in and produce and have filled that gap when someone's not playing up to par, that's a good thing to have and we have that. We have multiple guys that can play on the power play. That's what should happen if you're not playing well. Someone else should get a chance and step in and hopefully they play well when they get that opportunity. It's no different than the 5-on-5 game. I'll just attitude it to myself not playing that well."

Faulk, who is currently paired with Robert Bortuzzo during training camp while Vince Dunn (undisclosed) is not on the ice, has been paired with Pietrangelo, Dunn, Parayko, Jay Bouwmeester and Carl Gunnarsson at times.

Different roles at different times at a moment's notice, all in an effort to find the right niche.

That's why coach Craig Berube said Faulk, who had 258 points (85 goals, 173 assists) in 559 career games with Carolina, will be important come playoff time.

"Huge piece," Berube said. "I think 'Faulker' has really come into his own on our team. He's a great team guy. He does what we ask of him, playing the left side at times, right side, power play, penalty kill. He's a huge piece for us, he's a real good defenseman. We're going to need big minutes out of him.

"Listen, when you come to another organization after you've been one for a long time, he was slotted a certain way in one organization, it's not easy a lot of times to come to a new organization and jump right in. We have a real good d-core here and he knew that coming in, but he's fit in nicely. I think his play has gotten better and better all year. Sure, he's not happy with his points and that'll improve for sure. His power play time will improve for sure, but when you have a team that's already set and you've got to a new guy coming in, it's not an easy situation. I think he's done a good job, I really do. He's a great team guy, he does what we ask of him and his play has improved as the season went along."

Faulk, who spent a lot of his pause time in Minnesota crappie and bass fishing, wasn't the type to mope or pout. He understands the situation he was dealt into and has made the most of things that weren't up to his standards as far as his play on the ice is concerned.

Unless the Blues leave him exposed in the Seattle Expansion Draft and he gets selected, Faulk will get a plethora of time to get even more acclimated with St. Louis and the Blues.

As for the immediate future, what better spot to get on a roll than in the playoffs trying to help the Blues defend the Stanley Cup?

"It was fun, a fun group," Faulk said of his first season. "Obviously the team's in a good spot, first in the conference and it doesn't really matter too much now as long as we're in the top four in this situation. It was fun, it was good to be here and I like it here. I've enjoyed my time. Personally obviously, my personal game wasn't all that good, but at least I get a good chance here to build off it a little bit going into the playoffs."