O'Reilly returns to Buffalo for first time since trade to Blues

Ryan O'Reilly has been putting up career numbers since coming to St. Louis. 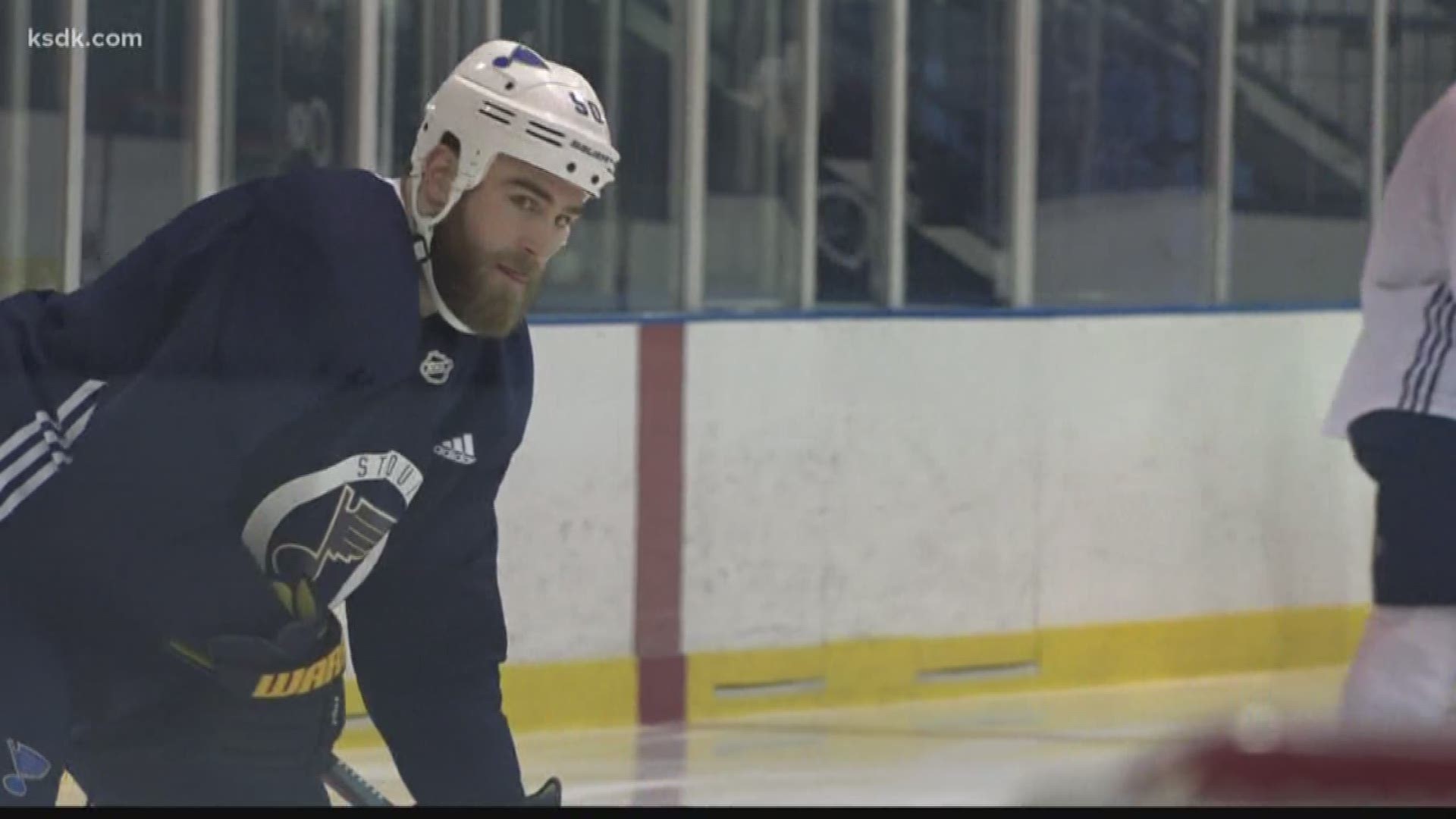 ST. LOUIS — It was the end of another losing year and no playoffs, the third straight for Ryan O'Reilly and the Buffalo Sabres, at the conclusion of the 2017-18 season, and O'Reilly had some things to get off his chest.

It wasn't anything terribly bad, just a guy whose frustrations had hit a climax.

Speaking to reporters in Buffalo for what amounted to be a locker cleanout day, O'Reilly talked about the persistent losing and how Sabres players seemed to be okay with it, and that continuity made him lose the love of the game he actually loves so dearly.

The comments raised some eyebrows at the time—nothing serious that TMZ would deem newsworthy—but looking back, it amounted to be the beginning of the end of O'Reilly's tenure with the Sabres after three seasons that were uneventful as a team, but numbers-wise, were good for him.

O'Reilly would eventually be traded to the Blues on July 1, ending his tenure in western New York.

O'Reilly, who has had a terrific first season with the Blues, leads the team with a career-high in assists (42) and points (68) while being two off of tying a career-high in goals (28). He's helped put the Blues in a position where they thought they'd be at the start of the season following a rocky beginning. While the Sabres, who had a 10-game winning streak early, went from being the talk of the league for the first couple months and first overall at one time, to now being under .500 and missing the playoffs yet again.

"It was frustrating from the start of the year. It was tough," O'Reilly said. "I remember talking to my dad quite a bit and being frustrated with the expectations we had here to come in and be a force right from the start and being reminded it's going to take time with so many new faces. Be patient with it. It was definitely worrying."

Not only have the Blues—who went on a franchise-record 11-game winning streak—gotten back in the race, they control their own destiny after rebounding in a big way Saturday with an impressive 5-1 win in Pittsburgh on the heels of one of the most demoralizing losses, 2-0 at lowly Ottawa on Thursday.

But O'Reilly didn't have long to reminisce or get together with former teammates and friends with the Sabres after the Blues got in Saturday evening.

"It would be nice to see the guys a little longer, be able to have dinner with some of them," O'Reilly said.

The trade that rocked the NHL world saw the Sabres send O'Reilly to the Blues for forwards Patrik Berglund, Vladmimir Sobotka and Tage Thompson, along with a 2019 first-round pick and a second-round pick in 2021.

It was a heavy price for the Blues to pay at the time, but one they deemed worthy. They were looking to change the landscape of their team.

And O'Reilly hasn't failed; he's putting up career numbers, including a turnaround of plus-22 this season after being a career-worst minus-23 last season, while Berglund is now out of the NHL after he left the Sabres following 23 games and two goals before returning home to Sweden, voiding the final four years of his contract. Sobotka has five goals and 12 points and is a minus-16 in 64 games this season. Thompson, a Blues first-round pick in 2016, has seven goals and 12 points and minus-19. To make matters worse now for Buffalo, the first-round pick could end up in Anaheim after the Sabres traded a pick away to Anaheim to acquire defenseman Brandon Montour at the trade deadline.

"The year is so long," O'Reilly said. "Like us, at one point we were in last place in the league pretty much and managed to fight back. It's so long. They were playing great hockey. You can see bad bounces and injuries. It's tough to stay in that position all year.

"... It definitely makes it a lot easier when we're winning and playing a lot better. It makes the inevitable trade stuff feel much better."

O'Reilly already faced the Sabres this season in St. Louis and scored in the 4-1 win at Enterprise Center on Dec. 27. So, the first-time feel won't be there facing ex-teammates on Sunday, but it will be as far as being in the building for the first time since he left Buffalo.

"I'm comfortable, I've got confidence in this team, I'm with this team," O'Reilly said. "Having that definitely helps. It's nice to not be in the same division and see them all the time. You see them twice a year and even like the first time we played them, in December, it's still weird, I have so many good friends out there.

There could be a tribute video prepared for O'Reilly's return, but that's not a given despite 176 points and 65 goals in 224 regular-season games.

"I have no idea," O'Reilly said on what kind of reception he expects. "I don't know what to really expect. It's going to be nice. I'll have a lot of family coming down from Toronto, a lot of friends that I made there that I'll get to see. I don't really know what to expect. I've been traded before. It helps a lot knowing it's going to be weird to be in that building, but at the end of the day, it's two points that we need and just focus on my game that way."

O'Reilly has fit like a glove for the Blues in every facet from scoring to defensive responsibilities to winning faceoffs (among the league leaders at 57 percent and a league-high 950 draws win), playing a ton of minutes (20:55 average per game) and dragging linemates into the battle, whether it be Vladimir Tarasenko, David Perron, Brayden Schenn and even Zach Sanford for a stretch.

The Blues were willing to pick up O'Reilly's $7.5 million signing bonus when they made the trade, an amount that goes to $5 million in each of the remaining four years and $7.5 million cap hit left on his contract he signed with the Sabres (seven years, $52.5 million) in 2015. But so far, it's been worth every penny for St. Louis and has O'Reilly playing meaningful games in March and April.

For the Sabres, some have called it one of the worst trades in franchise history.

"There's that belief that we can beat any team in this league," O'Reilly said. "We've found the confidence, we've found the chemistry that puts us in that realm of an elite team.

"We still have a long way to go. There's still another gear to get to and our main focus is to win this next game."

But looking beyond the numbers, it's the leadership qualities that are second-to-none, and perhaps that's what's impressed the Blues more than anything. From going on the ice early to remaining on late and working with younger players, the positive energy and vibes have rubbed off.

"He's done a real good job obviously of playing well on the ice, and first and foremost, he's been a very consistent player from Day 1 to now," Blues interim coach Craig Berube said. "Not been a lot of dropoff in his game. Very consistent. In saying that, that's how he leads by example. People see that and see the work ethic he puts in day in and day out, not only in games but in practice, off the ice. First one at the rink, last one off the ice. I mean, that's leadership."

Makes some of those first words of "Let's go win a Cup" O'Reilly said in his first conversation with Blues general manager Doug Armstrong have more meaning today than in October, November or December.