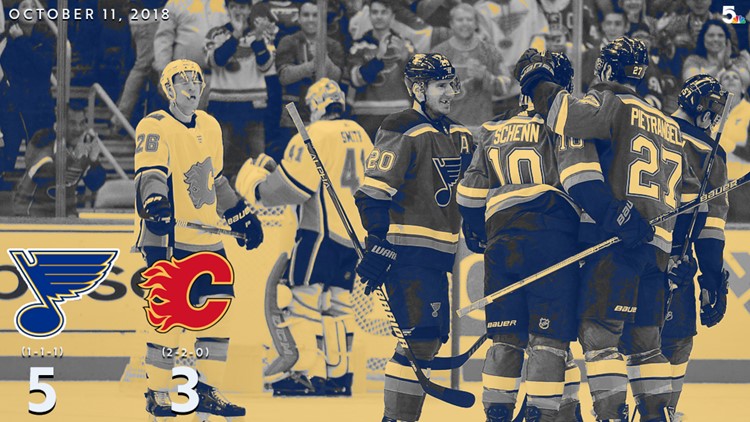 Perron entered Thursday's game against the Calgary Flames with zero points, a shortened summer and hip and groin that ailed him at points in training camp. Perhaps the five days between games here helped the veteran get himself going and feel energized for the start of a new season after a run to the Stanley Cup Final with the Vegas Golden Knights last season.

Perron got off the schneid with his fourth NHL hat trick, his first since Oct. 22, 2016 -- also against the Flames -- and helped the Blues get off the ground running this season with a 5-2 win Thursday before 16,403 at Enterprise Center.

Perron was moved onto a line with Jaden Schwartz and Brayden Schenn on Thursday and the move seemed to pay off. Perron looked fresh, he looked energized and he was involved in all parts of the game and helped give his team a boost.

"'Schwartzy' is always a guy who's easy to play with, he works so hard and gives you chances, so you have to get on the same page with him and work the same," Perron said. "We created a lot of opportunities and it definitely felt good.

"... It's quite different for sure, more of everything, more of what I was used to from last year, things like that. It's great. 'Steener's goal really gave us some energy, a great pass from [Jordan] Kyrou there, it was good."

Perron's linemates Schwartz and Schenn also each came in without a point in the first two games, and perhaps coach Mike Yeo was hoping by putting them all together that they'd energize each other.

"I was expecting a response from that line," Yeo said. "I didn't know result-wise but I thought they were going to have a good night."

Steen had a goal and an assist, Schenn had three assists, and Jake Allen made 31 saves for the Blues (1-1-1).

Allen was especially sharp in the game, making a number of saves at key moments, including several during a 1:35 stretch in the second period of a Flames 5-on-3 power play.

"I felt ready out there tonight," Allen said. "Even though we were up a few goals there on that 5-on-3, I think it was important for us to not let them get any momentum as a group.

The Blues got back some semblance of a defensive structure to their game, at least for the first 40 minutes when they grabbed a 5-1 lead.

But the Flames (2-2-0) battled back and scored twice in the third period in a 2:47 span that had Yeo red as an apple after he called timeout to settle the troops down.

"At that point, it's forget about how we got here," Yeo said. "We have a two-goal lead, we're at home and disappointing that we allowed them to crawl back in the game, but look at the opportunity we've got. Let's get back to being aggressive, aggressive but smart. Coming out in the third period, I thought we were just kind of sitting around not trying to execute, not trying to get to the offensive zone and I didn't think we were very aggressive.

"... There was more good stuff tonight, but we're obviously not there yet. A good result. Really happy for Jake the way he played the game. I wish we could have done a better job in the third period, but he was outstanding tonight and obviously, found a way to score some big goals. I still think we can tighten up and be better."

James Neal scored to give Calgary a 1-0 lead at 7:32 of the first before Steen scored 12 seconds later to tie it 1-1 off a feed from Jordan Kyrou, who picked up his first NHL point.

Joel Edmundson, playing in his first game of the season for St. Louis, made it 3-1 with 2:38 left in the first on a play in the slot, with Robert Thomas getting his first NHL point too.

Calgary forward Sean Monahan hit the left post on a penalty shot with 1:22 left in the first that kept it a 3-1 game.

Derek Ryan scored to make it 5-2 at 8:17 of the third, and Mikael Backlund made it 5-3 at 11:04 with a goal off Blues defenseman Alex Pietrangelo's skate.

That's when Yeo called the timeout and let the Blues have it.

"I think we needed it," Schenn said. "We were just getting hemmed in and not making plays with the puck. You want to win so bad sometimes, you almost forget you still have to play. It's good to get the first one out of the way and we'll roll from here."

Allen made a number of quality saves in that third period to keep the Flames from continuing to build any momentum.

"They're a good hockey team," Allen said. "As you can tell, they can generate a lot from nothing so I thought it was crucial for us to kill those off so it was well done by us."

Perron almost had a fourth when he thought he scored with 3:12 left in the second period but the goal was waved off after officials concluded he shoved the puck in with his hand.

"That's the right call, let's keep it that way," Perron said with a grin. "You do anything you can to score goals. I tried.

"I had an interesting one last year. I blocked a shot and we passed it down the ice and they put it in their own net. I'll take them anyway they go in."

Maybe it wasn't the 60-minute game cliche's the coaches and players use, but a win is a win, and the Blues will gladly take it.

"We had a good practice week," Perron said. "A lot of people I think were starting to panic but I don't think the players were. We put in the work this week, we just keep going. It's one win. We've got more games ahead soon here. Let's keep focusing on that."