"I definitely wouldn’t be where I am today without him. So it’s just been awesome. It’s been an awesome journey, and I can’t wait to continue doing it with him" 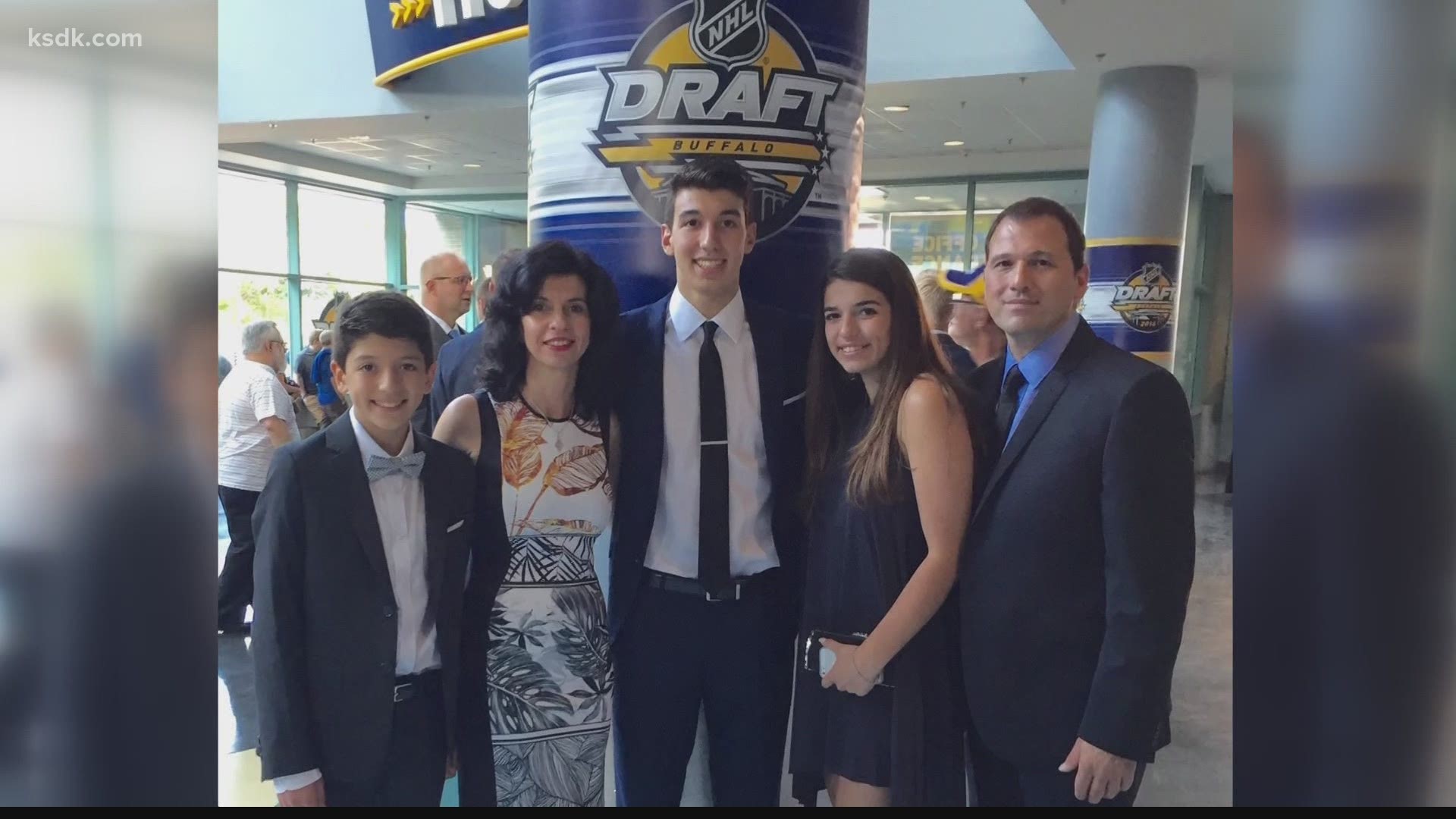 ST. LOUIS — As one of the crown jewels of the St. Louis Blues prospect line, Jordan Kyrou cracked the Blues’ opening day roster in 2018, but it wasn’t a fairytale start. He had to overcome on-ice hurdles and eventually suffered a knee injury that required surgery in 2019.

Kyrou was named to the roster again in the 2019-20 season, but would only tally one goal and two assists in his 16 games played.

This season, he was placed on the Blues taxi squad after a brief training camp, but 2021 has been a different story.

By Feb. 17, Kyrou was playing with Blues forwards Ryan O’Reilly and David Perron on the team’s top line.

The Blues were missing multiple veteran forwards from the lineup due to injury and that gave more opportunity for Kyrou to step up into a much-anticipated role.

Kyrou’s seven goals, 10 assists and 17 points on the season following Saturday’s loss to the San Jose Sharks ranked second in point leaders on the Blues roster. He only trailed Perron by one point.

His success isn’t happening by chance. So, where does it come from?

Kyrou’s story is rooted in a family work ethic and special family bond. It all began in Greece when his paternal grandparents immigrated to Toronto in the 1960s.

“My parents met when they were going to learn English in English school, the local night school there,” Aki Kyrou, Jordan’s father said. “And eventually they separated after school, but they found their path together again and it just sort of evolved from there. My dad was a hard working guy. He went into the restaurant business as most Greeks do.”

John Kyrou made donuts for the restaurant before it became an international chain.

Horton would often offer Kyrou free tickets to Maple Leafs games, but John wasn’t a fan of the sport of hockey just yet. It was a sport he wasn’t as familiar with at the time.

But that all changed when his son Aki was born with a natural Canadian passion to play the sport.

SPORTS PLUS PODCAST: Cards ready to head south, Blues get out of Arizona spiral and lawsuit continues to take it to the Rams

Aki Kyrou grew up playing pond hockey with nearby friends. Aki’s uncles owned a local sports bar in Edmonton and encouraged Aki to get involved with playing hockey.

Aki and his uncles would watch Edmonton Oilers games together during the Oilers’ dynasty era in the 1980s.

By the time Aki turned 11 years old, his mother and father signed him up to play hockey on his first organized team. He thrived.

“After a couple years I actually ended up playing AAA for the Toronto Red Wings,” Aki Kyrou said. “And we won the Ontario. So we ended up going to the Air Canada Cup, which was called the backpack in the day where the top team from each province would play to see who would be crowned the best team in Canada. I scored a goal in that game.”

John Kyrou fell in love with the sport by watching his son play. He and his wife owned their own catering business at the time.

John would cater banquets on the weekend and then drive throughout the night to attend Aki’s games wherever they may be. He made it his priority.

“We were in a tournament in Sudbury, I think, it was pretty far away,” Aki Kyrou recalled. “So he had to finish this banquet. After he was done he drove through the night so he could watch. I think we were in the finals the next day on Sunday or something. Whenever he could watch a game he would always watch it and get away from work from his restaurant business then he would definitely be there.”

Aki’s hockey career eventually ended when he settled down with his wife Roula Kyrou and chose to attend college.

Little did the young couple know, their firstborn, Jordan Kyrou, would be born with a gift to play the sport as well.

Aki helped Jordan learn how to skate, play and compete through endless pond hockey games, edge work drills and everything in between.

John and Aki Kyrou traveled together with their families to all of Jordan’s games across Canada as well. A family tradition, and priority, that never wavered.

John’s travels came to an end with his passing in 2010.

“He was amazing,” Jordan Kyrou said. “I miss him coming to the games for sure. When I was a little kid he kind of used to come to a lot of my games in like Mississauga. My minor hockey games, and he was like really supportive of me. Ya know, even if I had a bad game he would always tell me like, ‘You did great.’ He was always that kind of role model for me.”

Now, Aki travels across Canada and the United States to watch his sons play hockey: Jordan, a forward for the St. Louis Blues, and Christian, a defenseman for the OHL’s Erie Otters.

John may not be able to watch his grandson play in the National Hockey League, but Jordan carries a piece of his grandfather with him wherever he goes.

“He owned a variety store in his younger days,” Aki Kyrou said. “That was his first venture with my mom. They owned a variety store. And my mom thought they would go broke because he was always giving free stuff out to the kids that would come in. He would always give them candy for free. So my mom was like you gotta stop giving stuff out for free. We gotta make some money here. But that’s my dad. And Jordan I think has those, that kindness trait. He’s very genuine, and he’s kind.”

Jordan said everyone in the family has inherited the Kyrou work ethic, but he gets his competitive mindset from his father.

“Definitely my dad,” Jordan Kyrou said. “He can never lose anything. It’s insane.”

“Yeah, but it’s not only hockey,” Jordan Kryou said. “I feel like everything, I always compete. I’m a really competitive kid I think, and a lot of things I do I’m always competing at it. I always want to be the best at whatever I do, and I think I kind of get that from my dad as well.”

The Kyrou work ethic, and desire to compete, is paying off for Jordan’s career this season.

Although Aki can’t travel to watch Jordan play during the COVID-19 pandemic, he never misses watching a game on television or on the internet. And Jordan takes the ice each game with his dad in mind.

“He always uses the word tenacious,” Jordan Kyrou said. “He’s used that my whole life. Just want to be real tenacious on the puck, and I think that’s one word that’s stuck with me. Just always being tenacious. Always just trying to be on the puck like wherever it is.”

A father-son bond through three generations that serves as a foundation for Jordan’s career in the NHL.

“It’s incredible,” Aki Kyrou said. “I have to pinch myself everyday still. Sometimes you forget. You’re watching him on the big ice there in the NHL, and you think you’re still watching minor hockey or OHL. So you just gotta remind yourself that wow he’s playing on the biggest stage in the world when it comes to hockey.”

“You know grinding in the basement for a workout, or sometimes after games if I didn’t play that well, my dad would be like, ‘Hey, get on the treadmill, you gotta get it back,’” Jordan Kyrou laughed. “So, he’s been there obviously with me through my whole life, and ya know, I definitely wouldn’t be where I am today without him. So it’s just been awesome. It’s been an awesome journey, and I can’t wait to continue doing it with him.”