They just keep defying the odds, just like they did last season 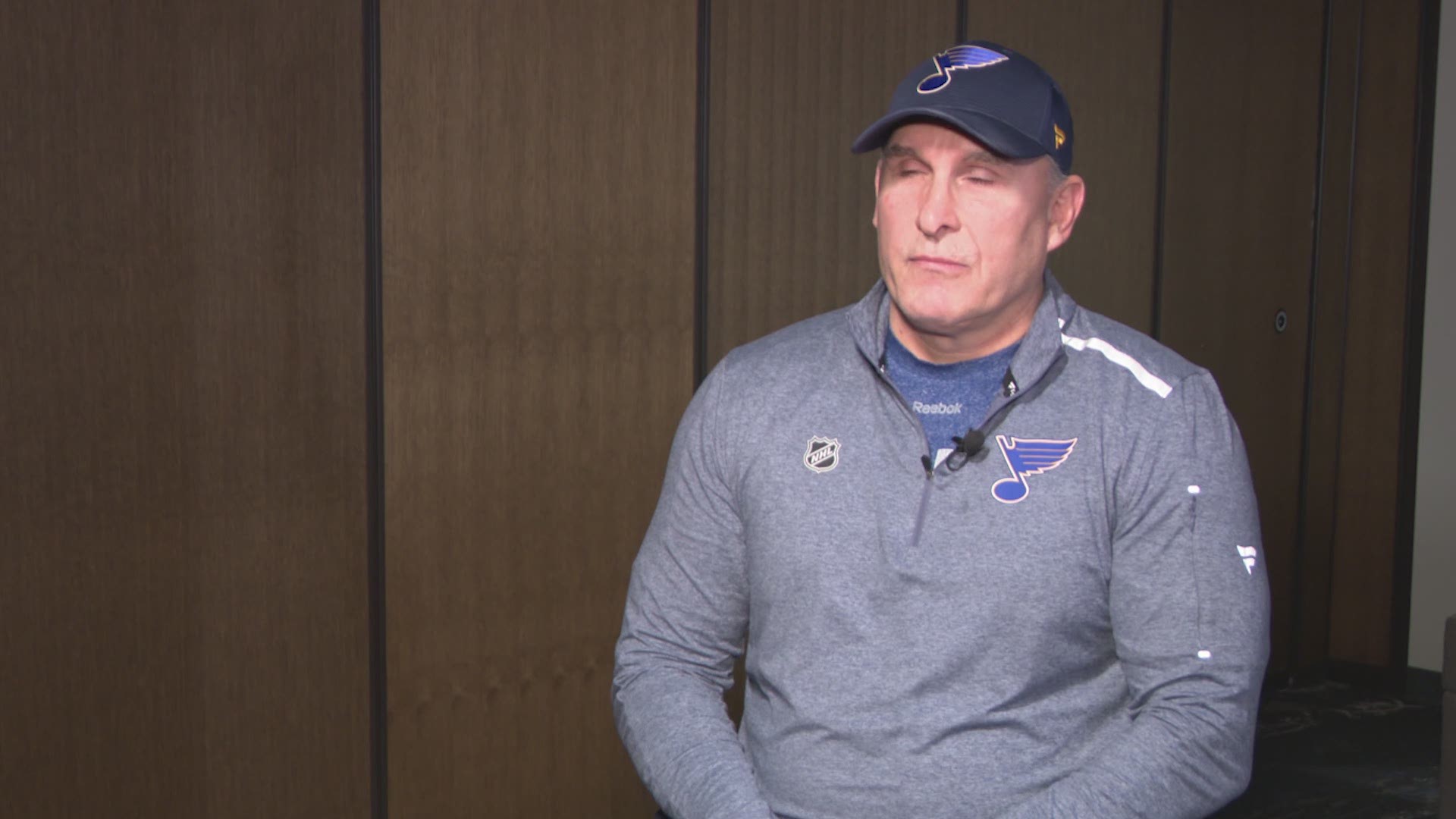 ST. LOUIS — The well can run dry at any moment for the Blues, playing with spirited emotion and a strong will, minus several key components in their lineup.

Take away Vladimir Tarasenko, take away Alexander Steen, take away Sammy Blais and now take away Oskar Sundqvist. How many teams, especially with so much parity in the National Hockey League, could survive that kind of purge to one's lineup?

Well, the Blues are defying the odds, if there are any. They just keep plugging and playing, and the results don't seem to change much. In the process, they keep finding ways to bag points and did so once again in a 5-2 win against the equally decimated Pittsburgh Penguins at Enterprise Center on Saturday.

Removing a quarter of your forward crop will test the mettle of even the best of teams. It's not easy to overcome losing such players, especially with the sorts of contributions each of those players bring.

But the Blues (17-5-6), winners of three straight and 5-1-1 their past seven games, bring up Aussie Nathan Walker and his diminutive 5-foot-9 frame and plug him right into the lineup. All he did was score an incredible hand-eye coordinated goal, one night after having his first goal as a Blue disallowed by an offsides call, one of his own doing.

The Blues sign Troy Brouwer to a $750,000 contract and plug him right into a leadership role and familiar role with many of these Blues players he was teammates with in 2015-16; they trade for Jacob de la Rose, who may not rattle the score sheet often but brings an element necessary to what coach Craig Berube calls the Blues' aggressive, physical, puck-possessing game; Mackenzie MacEachern has jumped in admirably and filled a role, and Austin Poganski, although hasn't played, was recalled because of his strong play in San Antonio, and Klim Kostin was given a sniff in the NHL and scored his first goal.

No matter the circumstances, these players aren't just here to he reinforcements, they're here to be important contributors, and those who are here playing on a regular basis are making life good for these new guys trying to fit in.

"Right when I got here, you can tell there's a lot of confidence in this room," said de la Rose, acquired from the Detroit Red Wings on Nov. 6 for Robby Fabbri. "Even if you get a goal against, you just keep going and keep pushing. We know we're good enough to beat every team in the league. We just have to keep going here, keep playing with that confidence and make plays with the puck.

"I think first of all, the group is so tight. It's almost the same team as it was last year that won the Cup. They know how to get the best out of each other. They're good teammates and they take care of the new guys. It's been pretty easy to get in here to the new team and to take care of me."

There's a unity within this Blues locker room that's tough to penetrate, or disrupt, as the opposition would like to do. That unity helped carry the Blues to their first Stanley Cup last summer when they may have been out-talented on the ice at times, and it's carrying them now.

"There's confidence in everyone in this room," said defenseman Justin Faulk, acquired from the Carolina Hurricanes on Sept. 24 and another of the new guys who's fit in. "No one that steps in doesn't feel out of place and I think everyone in the room has confidence in anyone that's going to step in or move up in the lineup or whatever role they're asked of. It seems like we make it as seamless as possible for guys. It's just nice to see that we have that confidence with no matter who's in the lineup and whatever we've got to work with."

"It's obviously a super-tight group," Walker said. "You go and win the Stanley Cup and everyone in this room knows everyone. I think the guys on this team are great, especially now I've had a bunch of questions and everyone's answered them. They're trying to help me out as much as they can. I think I just touch back on how close a tight-knit group this is."

From the front office to Berube down to the assistant coaches and the leadership group, nobody makes anyone feel uncomfortable, and for all the rumors in years past that certain Blues fans have had this notion that the locker room is divided, think again.

"We're banged up, a lot of injuries, so guys that come in, they've got to contribute. It's not just putting in time. We need them to contribute and they've done that," Berube added.

The Blues know nobody will feel sorry for them. Injuries are a nature of the beast, so it's up to them to stay ahead of the curve, and since Tarasenko, who's been the Blues' leading scorer the last five seasons, left the lineup, they're 12-3-3; they're 6-2-3 since Steen left the lineup, 4-1-1 since Blais departed and they haven't lost (2-0-0) since Sundqvist was injured. The good news with Sundqvist is he is expected back much sooner than anticipated. The others are long-term injuries, so the Blues will need to keep their plug-and-play guys to keep contributing.

"It's always tough to see someone get injured, especially players like Sunny, Steener, Vladi and Sammy, but we've got a lot of players in San Antonio," forward Ivan Barbashev said. "They've been great all season and they're working hard to get (an) opportunity. Once they get called up, they do a really good job. You can see Walker, he's been great the last two games and working hard. He didn't get the goal last game, but he got one tonight, and it just shows how hard he works. He's just been great for us."

Everyone on the same page keeps breeding confidence, and the Blues are displaying no such Stanley Cup hangovers to this date. They just keep defying the odds, just like they did last season.

"Guys feel good," Faulk said. "Guys are putting in the work. We know it's a 60-minute game and you've got to play hard. Even tonight, we maybe didn't have the best second period. I think Pittsburgh did some good things and put us on our heels there in the second, but we came out right away in the third ready to go and kind of put the hammer down and put an end to it."