Blues win one for the ages. Here's how it happened.

The Blues rallied for four goals in the final period

ST. LOUIS — There are games to store in the memory bank, wins are always nice but are often forgotten with time.

Not against this opponent.

Seemingly dominating much of the game but trailing by three goals to the archrival Chicago Blackhawks in the third period, the Blues dug deep into their resiliency tank and sent 18,096 mostly blue-clad fans home boisterous.

But go back to the Blues of last year and see their resolve, see what they went through to win it all and it's understandable why they were able to persevere through this.

"Yeah for sure, this team went through so much last year, the ups and downs they had and obviously came out on top," said Blues forward Jacob de la Rose, who tied the game 3-3. "There's a lot of confidence in this room and we know if we stick with it, we're going to get rewarded. Same thing today, we never stop pushing. We just kept pushing and it was an awesome win."

Every statistic said the Blues (20-8-6) would win this game in a landslide after the first period. They were ahead 25-4 in Corsi, seemingly controlled the puck for most of the period, the shots on goal were 13-2, 5-on-5 scoring chances favored the Blues 12-1 and high danger scoring chances were 5-0 in favor of the Blues.

Yet, it was a 0-0 game thanks largely in part to Blackhawks goalie Corey Crawford, who saved Chicago's 'Roar Bacon.'

But Crawford couldn't save the Hawks' bacon in the third period.

"I don't think we were playing a bad game," said Blues defenseman Justin Faulk, whose game-winner with 2 minutes 26 seconds left completed the comeback. "I thought we were actually playing a pretty good game, limiting some of their chances. It could be a case of it just turned our way there the last half of that third period. It's just one of those nights that was a little weird probably, but I think we played a pretty good game from the start."

In a game that the Blues should have dominated from the outset, the game of hockey can be cruel sometimes. What were the chances that they would allow the first goal somehow, then look up at the scoreboard and wonder how.

Well, it happened, and early in the second, just 19 seconds in, a Brandon Saad wrister somehow found its way through and beat Jordan Binnington on the short side.

The Blues kept pushing in the second, yet came up empty. Again. Crawford. Again. He was throwing all his wrenches at every opportunity.

"I think we've been through a lot as a group, we stay even-keeled no matter what's going on," Bozak, who played in his 700th NHL game, said. "We don't get too high or too low. We know there's going to be stretches of the game that don't go your way and you've got to keep pushing. Luckily it worked out for us tonight."

It didn't look like it was going to work out when Saad scored again 30 seconds into the period to make it 2-0, then nemesis Patrick Kane made it 3-0 on a high-slot wrister at 4:16 to seal the deal, or so the Blackhawks thought.

In the famous words of Lee Corso, "Not so fast my friend!"

The turnaround was quick, and swift, and Bozak's first of two 24 seconds after Kane scored was what gave the Blues juice.

"Bozie got us an early one there, kept us alive and after that, we kept pushing," de la Rose said.

Bozak scored again, with a little luck, off the right toe of his skate from the crease to make it 3-2 at 13:08. And de la Rose, off a nifty forecheck from Ryan O'Reilly and even a sweeter backhand sauce pass, with a heck of a backhand top shelf 12 seconds later tied the game 3-3 and shook the roof.

"First, I dumped it in and it wasn't a very good dump to be honest with you," de la Rose said. "I should have kept it away from Crawford, but 'O'Ry' made a good forecheck and he found me in the slot and I really didn't have time to put it on my forehand, so I shot it with my backhand and it's a good feeling to see it go in.

"I've got some secret weapons in my toolbox."

When de la Rose scored, it was academic that the Blues would win. The only question was when, and Faulk took the honors when he took a Robert Thomas feed, skated into the left face-off circle and beat a handcuffed Crawford.

The comeback was complete. The two points were bagged, and the Blues found a way, an unconventional way to win a game they dominated on the stat sheet.

But this team simply isn't conventional. They overcame a three-goal deficit to win a game in regulation during the regular-season for the first time in Blues history, second time if you include the Nov. 29, 2000 game in Toronto in which they were down 4-0 heading into the third, 5-0 at one point before winning 6-5 in overtime.

"These are key," said Binnington, who made 19 saves. "It's not always going to be perfect. We stayed with it and we're going to use that and take it and go."

Faulk added, "You can get frustrated and you can get down. It's a good group in here, it's a veteran group. I don't think we ride that roller coaster of emotion too much. We were able to stick with it and build off the first one. It doesn't go like that all the time, but we'll take it."

Yes they will, and it couldn't have been a more memorable 1,500 straight game of public address announcing for extraordinaire Tom Calhoun. 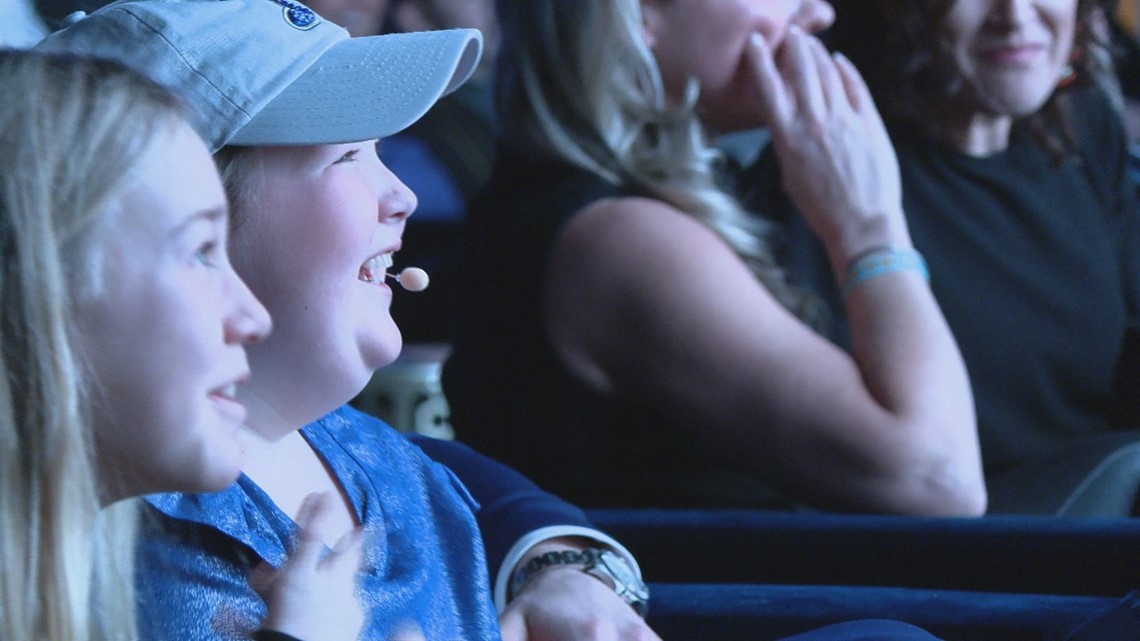 Laila: The Next Season | Behind the scenes of the Laila Anderson documentary premiere
ST. LOUIS - The blue carpet rolled out Friday night for one of our hometown heroes. Laila Anderson had her name in lights at the Fox Theatre as they showcased a documentary about her journey. This die-hard blues fan captivated our hearts with her remarkable journey battling a rare life-threatening disorder, hemophagocytic lymphohistiocytosis, or HLH.