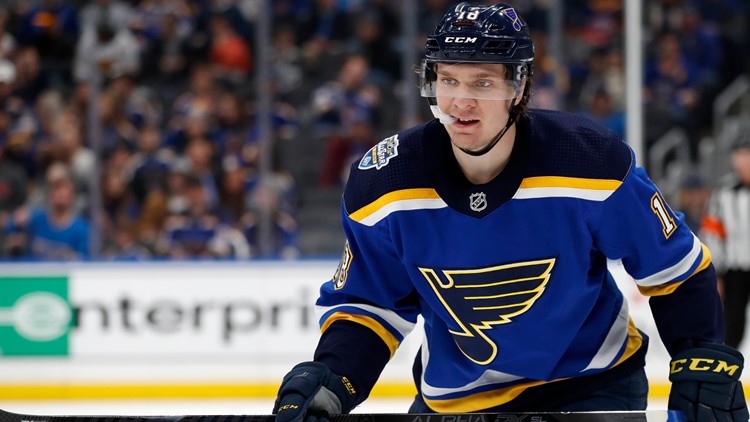 The league will announce at some point tonight those that will come from each division among the 'Last Men In' as voted on by the fans that ended at 10:59 p.m. last night.

There has been a lot of buzz around the city and the league for Perron, who was surprisingly not initially named to the Central Division All-Star team but was the Blues' representative on the fan ballot.

"I thought obviously he should have been in there from the start," O'Reilly said. "I hope he does. I think it would be amazing just because he's a huge reason why we're in this position we are now. The amount of, not just points he's put up, but the significant goals he's contributed to, the overtime goals to get us these wins I think are monumental. I think for all of us in here, for him to get rewarded for that would be huge."

O'Reilly even would have named Perron before himself.

"Absolutely. I thought up front, you obviously look at the numbers alone, for sure I thought he should have been there instead of myself, absolutely, for what he's been doing," O'Reilly said. "It is nice that we do have a lot of guys going. It's a good feeling, and for the amount of buzz around him, I think and I hope he would get in and it would be awesome."

Sportsnet is expected to be announcing those last few players for the All-Star Game, which will take place on Jan. 25.

Jacob de la Rose, a healthy scratch the past two games, will be reinserted back in for Jordan Kyrou.

Kyrou, who has been the culprit of offsides challenges in back-to-back games that have negated Blues goals, isn't necessarily coming out because of those instances, but coach Craig Berube is looking for continued growth and development at the game's highest level.

"Any young player, the NHL's a tough league," Berube said. "He needs to become a harder player. That's the best way I can put it. Like in battles and puck wall battles. Little things here and there. He's a dynamic player, great speed and skill in open ice. But you don't get that much open ice a lot of times. So I want to see him battle harder and be more competitive in those areas."

Against the Rangers, a team that likes to play with speed and transition, a guy like de la Rose can be beneficial for defensive purposes.

"We need a big centerman down low tonight in our own end and a penalty kill," Berube said. "He does a good job that way. Yeah, his game's slipped a bit for a few games on that road trip. There's a lot more there with him I believe than we're seeing. He's a big guy. He's got good skill. Strong skater. His hands are fine. And he's got a good shot. He needs to use those assets more. I think he can help us offensively, too."

De La Rose, who has eight points (two goal, six assists) in 40 games this season, has acknowledged his game has slipped somewhat and needs to stay on his toes to keep a spot.

"Sure, we have a lot of depth on this team, so you've got to be playing good every night to stay in the lineup," de la Rose said. "I feel like my game slipped a little bit the last few games too, so excited to be back and I'm excited to show that I should be in every night.

"I'm kind of self-aware of my game and what I need to do better, so I knew that I needed to play better. ... We almost, knock on wood, have a full, healthy team now too. We have a lot of depth on this team. There's a lot of good players. Can't take any nights off in this league. You've got to play at your best every night."

With Kyrou coming out tonight, Oskar Sundqvist will move up off his customary fourth-line role to play with Brayden Schenn and Jaden Schwartz.

Sundqvist is the guy that Berube likes to move around when a line needs some pep, and he will get that chance again tonight to add some defensive responsibility against one of the Rangers' top lines.

"I'm just trying to play my game," Sundqvist said. "Obviously it can be tough at times moving up and back and playing with a bunch of different people all the time. You'd rather stay on the same line for a while, but it is what it is. I'm just trying to play my game and helping that line score some goals and help the team win. It's been going good. I can't complain. I love playing with anyone in here. It's been a lot of fun.

"[Berube] usually gives me a heads-up. I don't mind. It can be tough sometimes. You kind of get confused who you might be playing with, but I'm trying to make the best of it. I don't mind, I don't care who I'm playing with. I'm just going to play my game. I hope to help that line produce."

The Rangers come into the game eighth in the NHL in scoring at 3.35 goals per game, which is the challenge for the Blues, who are fifth in the league in goals allowed at 2.64.

"He's obviously one of the elite players in the game," O'Reilly said of Panarin. "I think he's leading for 5-on-5 points in the league. He's definitely something that we're focused on. We have to be aware of that. He's one of those guys that you've got to step in his way every time. We have to find way to keep the puck off his stick. He's just one of those elite players that every time he touches it, he creates something or he's in a scoring are or it's going to be a good chance. We need to be very, very hard on him.

"They've got a lot of skill, especially up front. We have to do a good job of taking care of the puck and tracking, make sure we're not giving those rush chances. We really need a big start coming out here. For us, we've got to be real physical on these guys. We've got to slow them down, find ways to make it real tough on them."

There's also Mika Zibanejad, who has 35 points (17 goals, 18 assists) in just 30 games because of injury, and Ryan Strome (12 goals, 29 assists) has had a resurgent season, along with a bit of a breakout year for Tony DeAngelo (11 goals, 25 assists), but Panarin is the guy the Blues will need to contain and do so in 5-on-5 situations.

"He's leading the league in 5-on-5 points, so he's a high end offense player with a lot of skill," Berube said of Panarin. "Been a good player for quite some time on three different teams. Highly skilled and competitive.

"... There's obviously certain games that got away from us (5-on-5) going back to the Colorado game where we didn't do a good job on [Nathan] MacKinnon and paid for it. But it's going to be a challenge tonight. Not only him, but they got a number of good forwards who can really skate and are skilled. And they got a couple defensemen back there that are really good puck movers and they got quite a few points, too."

Blues forward Tyler Bozak admitted Thursday on Stars Wars Night here, he's not a Star Wars fan and hinted that O'Reilly is the opposite.

Well, that holds to be true.

"I really liked [Star Wars: Rise of Skywalker]. There's obviously little things I would have changed, but I love just the whole reboot. Star Wars has been exciting. Just to have Star Wars back in my life and something to look forward to is awesome. I thought they did a great job. The special effects and everything was just incredible."

O'Reilly said he noticed all the Star Wars-themed apparel in the stands on Thursday. His favorite character as a dress-up would be ...

"Dressed up as Yoda would be nice," O'Reilly said. "I'm a big Yoda fan. It was cool to see the different people dressed up. I loved that."

* Perron is on a three-game goal streak, has five points (three goals, two assists) during the three-game point streak and 15 points (seven goals, eight assists) his past 11 games.

* Bozak has six points (three goals, three assists) the past five games and has seven goals the past 11 games after just three goals in his first 33 games.

* O'Reilly has a nine-game home point streak (one goal, 10 assists).

Jordan Binnington will play in goal; Jake Allen will be the backup.

Henrik Lundqvist will start in goal; Alexandar Georgiev will be the backup. The healthy scratch is expected to be Igor Shesterkin. Libor Hajek (knee) could play; Brendan Lemieux (hand) is out, and Ryan Lindgren (lower body) skated in the optional this morning and questionable.