'It meant the world to my father' | The ring that bonded St. Louis Blues legends Dan Kelly and Barclay Plager

Two St. Louis sports legends were also legendary friends. And the story of Barclay Plager's 1974 All-Star ring and his gesture for Dan Kelly is a Blues classic 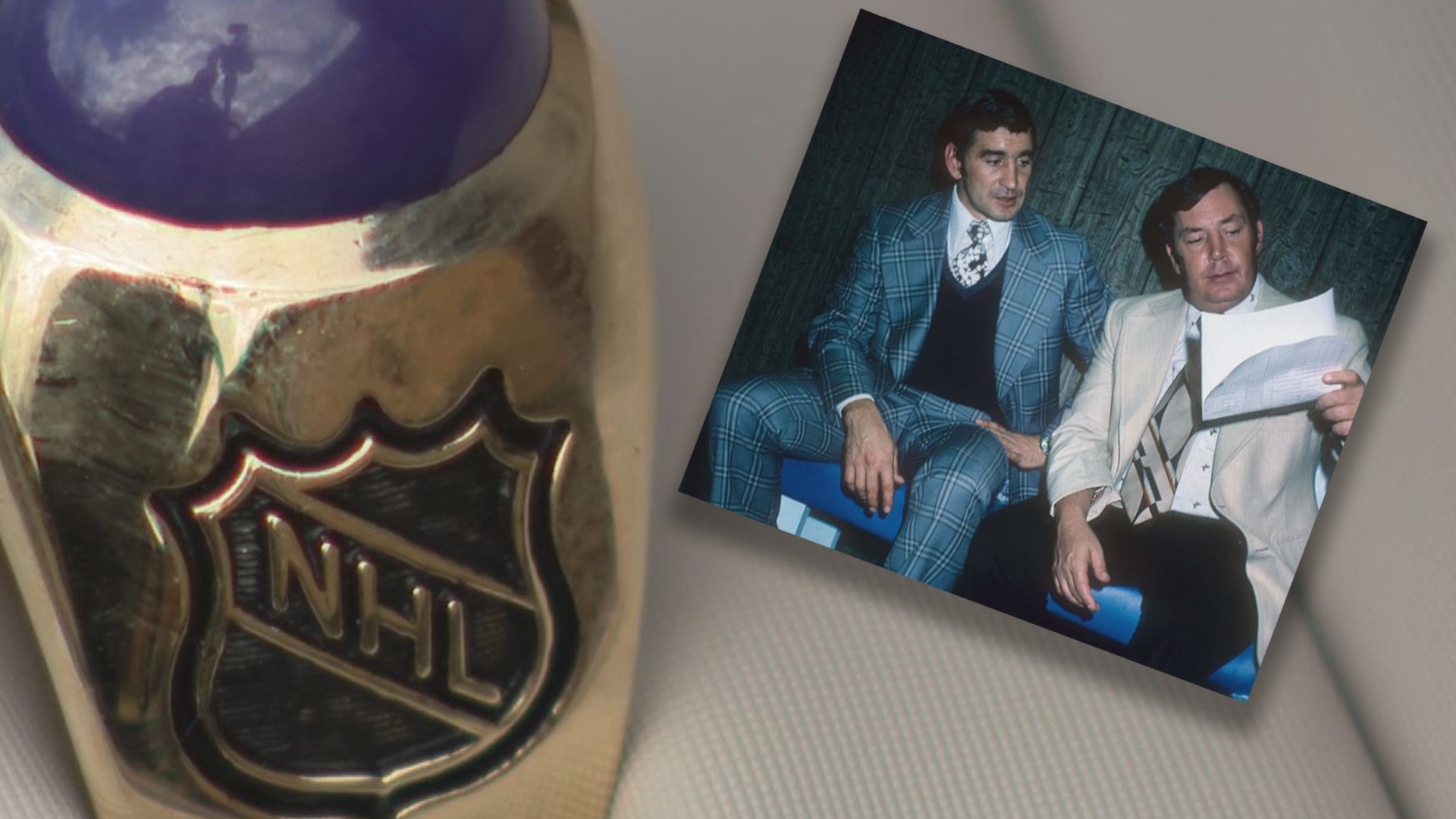 ST. LOUIS — Today, Barclay Plager and Dan Kelly are still together in the rafters of the Enterprise Center. As a retired number "8", and the Kelly three-leaf clover.

But their relationship was more than just being two St. Louis hockey legends, or even just a player and a broadcaster.

And one ring tells the story.

Kelly was the voice of the NHL for two decades, and a legend in St. Louis. He arrived in our town in 1968 and called 16 Stanley Cup Finals and 12 NHL All-Star Games in his career.

He was one of the reasons so many people came to love the Blues.

Plager came to St. Louis a year before Kelly, and when he retired he had played in more games than any player in Blues history, and was a four-time All-Star.

The two became inseparable over the years.

"They became really close to Barclay. Some of my children were the same age as Barlcay's children, so they'd be at the games together," Fran Kelly, Dan's wife said.

"When Barclay became a coach, I know sometimes they'd drive to the airport together, and I know that my dad being very confident in the game of hockey he probably told Barclay who to play that night," John said.

Then, in 1974, Plager decided to do something nice for his broadcaster friend.

And that ring became a symbol of their friendship for the rest of their lives.

"The ring was on my father's pinky till the day he died," Dan's daughter Susan said. "And ever since then, it's been in my mother's possession hidden away in a special spot."

"He (Barclay) wanted him to have the ring, and he (Dan) didn't want to take it but he (Barclay) insisted," Fran said.

"I know it meant the world to my father," John said. "Because as a broadcaster, of course, you don't get all-star rings."

"I couldn't think of anybody better to get that ring than Dan," Helen Plager, Barclay's wife said.

The Kellys recently asked if the Plager family wanted the ring back, and, in turn, may have brought the team Dan and Barclay loved some extra luck.

"My mom and I went up to the alumni box before Game 3 against the Boston Bruins in the Stanley Cup Finals. We brought the ring to Mrs. Plager and my mom said, 'Our family decided maybe we should offer this ring back to you, would you like it back?'. And Helen Plager said, 'No Fran, Barc gave that to Dan and he'd want your family to have it'. So we said, 'Ok we can't argue with you Mrs. Plager'. So we had her kiss the ring for good luck and then we won the Stanley Cup."

This great pair of friends also died well before their time.

Barclay died from a brain tumor in 1988 at the age of 46. Dan Kelly gave the eulogy.

Kelly died almost exactly a year later, from cancer at the age of 52.

But their family friendship continues to live on in that 1974 All-Star ring.

"It really meant so much to him, and personally I've never heard of another athlete doing that for a broadcaster, so I think it's pretty amazing," John said.