With Pietrangelo gone, Faulk to get more defined role with Blues

"For me right now, he looks excellent out there. He's skating, he's got a lot of jump. He's tight on people, there's no room when he's on the ice." 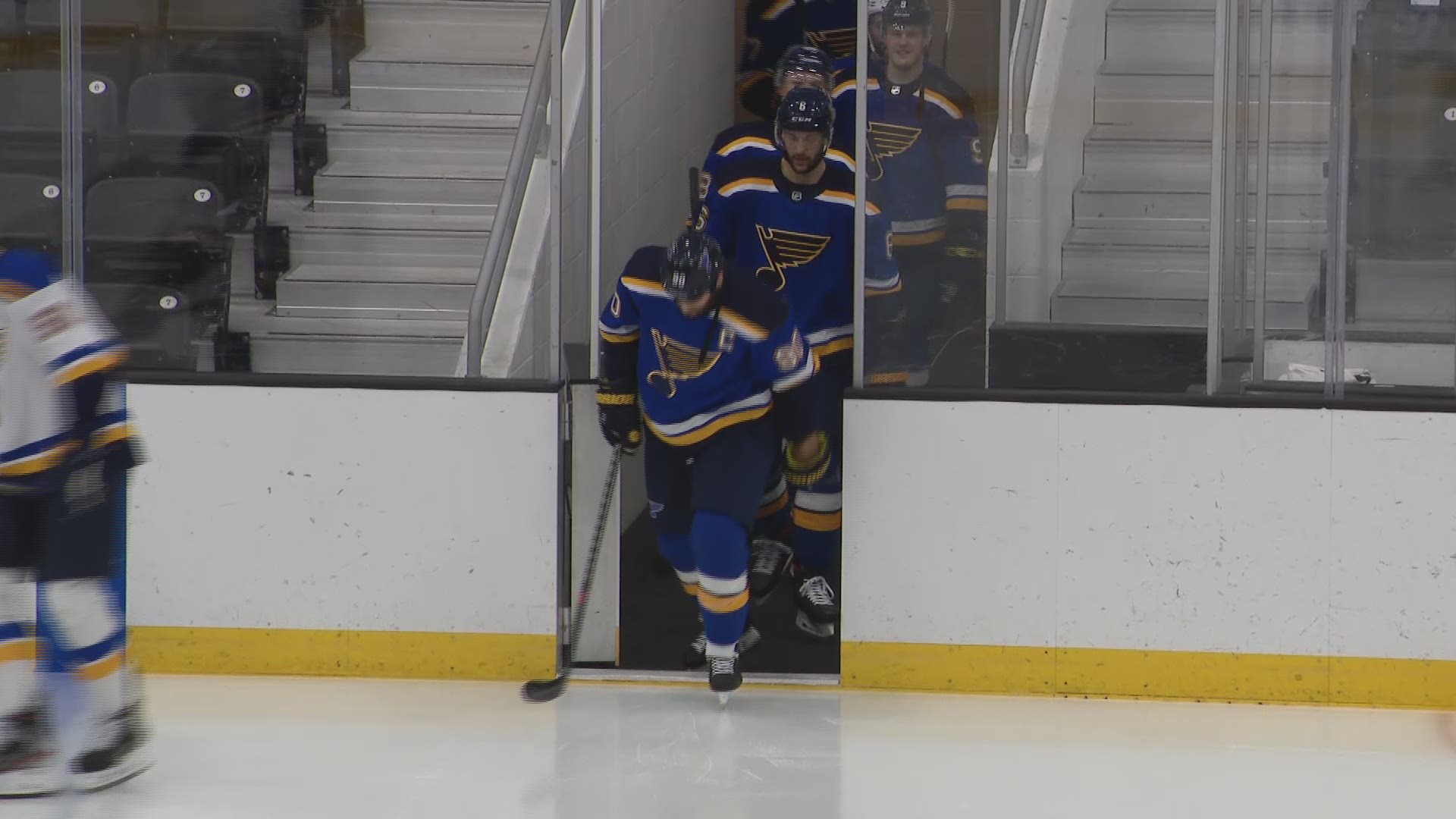 MARYLAND HEIGHTS, Mo. — Justin Faulk continues to maintain that his first season with the Blues was not what he wanted, nor expected.

It's evident that opinion will never change.

The 28-year-old doesn't shy away from the fact that it wasn't good enough, even though Blues general manager Doug Armstrong admitted that Faulk, who matched a career-low in goals with five and his 16 points in 69 games were the fewest since he had 15 in 2012-13, simply wasn't given "a specific job responsibility."

However, Faulk found his game when the Blues returned to play during the 2020 Stanley Cup Playoffs inside the Edmonton bubble, and moving forward, with Alex Pietrangelo gone and the right side defensive logjam with Pietrangelo, Colton Parayko, Faulk and Robert Bortuzzo not presenting itself anymore, there will be the responsibility -- and some pressure -- for Faulk to step to the stage and grab some more minutes and more responsibilities.

Early in training camp ahead of the season-opener Wednesday at Colorado, Faulk has been paired with Marco Scandella on what will be dubbed as the Blues' shutdown defensive pair, and Faulk is looking the part in the early going.

"He's been a good shutdown guy for us," Blues coach Craig Berube said. "I think he's played really good defensively against top lines. We're going to continue to use him in that role. He's been a real good penalty killer for us. We're going to keep using him in that role. For me right now, he looks excellent out there. He's skating, he's got a lot of jump. He's tight on people, there's no room when he's on the ice. He's doing what we're asked of him.

"Throughout (last) season, we had him kind of bouncing around, left side, right side, different partners. We were trying to find a fit for our 'D' in general. I think with adding Faulk, that right side gets clogged up. Three big righties like that, they need minutes. I think it was an adjustment too from power play stuff. We tried him a bit. We have a lot of PP guys back there. We do again this year. I think that was a bit of an adjustment for him and for us, but I think that he's found that role where he's fitting in nicely right now."

Faulk will definitely get the ice time this season, he'll be a penalty killer, which is not the role he was solely accustomed to while in Carolina as a power-play specialist. He hasn't been used on the Blues' potentially lethal power-play units thus far in training camp, although at some point in time, that could change, but for now, whatever defined role Faulk is given, it should serve him well to know where he'll play and when he'll play because it should dictate how he plays.

"Whether (a defined role) is there or not, I think it’s every player’s job to either take that opportunity if it’s there and if it’s not, you’ve got to kind of create it yourself and play well enough to kind of force your hand if things aren’t there for you right away," Faulk said. "You’ve got to put them in the spot where they’ve got to make those tough decisions and give you ice time or not. I think that goes for everyone whether you’re old or young. That’s the nature of our game and our league. Nothing is given to you and everything has to be earned. It’s up to me on how I played. I’m here to do my best and help the team win games.

"I’ve said before, plenty of times. I didn’t play well last year. I’m not here to make excuses for that or point to anything as to what that reason was. Right now ... things have been pretty steady so far with what we’ve been trying to accomplish with lines and pairs and we’re just going to go forward and we’re going to try to win as many games as possible and I’m going to just try to play my part within that and help the team win games."

Faulk did his part during the playoffs, even though the outcome wasn't what the Blues were looking for. There was no rhyme or reason for it, but it just clicked more times than not, and the Blues are hoping for more of the same but on a more sustained level.

"I don’t know what the exact thing is. It’s playoff hockey," Faulk said. "I think there’s no excuse for not to have it anytime but in the playoffs, you need to find that next level and you’ve got to be ready to go and there’s no freebies in that situation. And it’s going to be similar this year with the shortened season. Guys are going to have to be ready to go and every game means a little bit more this year, especially with every game within the division. It’s essentially a four-point night every night so just being ready to go and knowing the importance of every game, I think I’m comfortable with that and I think our whole team is too."

Faulk doesn't seem to mind he's not in the mix, yet, for power-play duty. With the Blues having newcomer Torey Krug quarterbacking the first unit, and Parayko and Vince Dunn manning the point on the second unit, it's clear at the outset that Faulk, who had 79 power-play points the previous five seasons in Carolina before having just three in St. Louis last season, will have special team duties. Just not on the side everyone expected.

"My job right now is to help the team win games," Faulk said. "We’ve got plenty of guys that can play on the power play. We have Vladi [Tarasenko] who’s hurt who, when he comes back, has a spot on the power play too. I think that just shows the depth of our team and the position we’re in trying to win here and whatever that entails and I think everyone’s on board with that. Things can change throughout the season and all the time, but if that’s the way the coaches feel that’s going to help the team best, then I’m all on board."

Sounds like words from a team player, and although there have been many Blues fans that didn't warm up to Faulk's debut season here last year, they're getting the sense just how much of a team player Faulk is, and if those words aren't evidence enough, Faulk's reasoning for not switching from No. 72 to his usual No. 27 he wore in Carolina should serve notice that he is all about the organization.

"No. I can't do that," Faulk said of taking the number Pietrangelo wore here for 12 years. "It didn't even cross my mind. He's wore that number here for a long time, he was the captain, he captained the team to a Stanley Cup. I'm not going to go knocking for a jersey number the day someone of that importance leaves the franchise. I don't think that's right. I'll continue to wear 72 as long as I'm here."

And now with Pietrangelo out of the picture, a lot of eyes will be on Faulk and the seven-year, $45.5 million contract Armstrong trusted him with upon trading for him prior to last season.

"When you come into an organization and you're not given a specific job responsibility, it's hard to find your way, and I don't think that we were able to find something that he could sink his teeth into and say, 'OK, this is mine and I'm going to max out in that area,'" Armstrong said. "I thought he played better hockey in the bubble at certain times, but I think there's another level that he expects to take his game to and we expect him to take his game to."