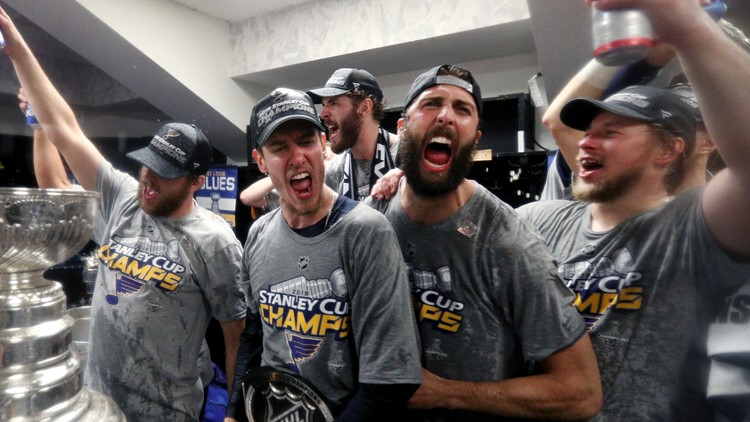 St. Louis became one large party on Thursday, but there was no violence, just lots of smiling and drinking. Everything is currently awesome in the Lou.
Author: Dan Buffa
Published: 1:45 PM CDT June 14, 2019
Updated: 9:05 AM CDT June 15, 2019

ST. LOUIS — When I was growing up in South City off Tholozan Avenue, my dad used to tell me, "some things just take time." In the case of the St. Louis Blues, some things take 52 years. After years of disappointment and "maybe next year" promises, the Blues achieved the seemingly impossible: Lord Stanley's Cup in their possession. Why impossible? Whenever I came into contact with a fan in the past 24 hours, the word uttered the most was "unbelievable."

From the moment those final seconds ticked off the clock at the TD Garden on Wednesday night, St. Louis became a city of blinding, and everlasting, light. The parties raged into the morning hours. The players got into town around five in the morning, and immediately went to a Brentwood bar to continue partying. Whenever you went, a sea of blue followed you. Fireworks went off, horns were sounded, and screams were endless.

Here are five things we learned after the Blues brought home the Cup.

5) OB. Clark's is King's Landing for the Blues and their fans

Before the sun was up Thursday morning, people packed the lot of the Brentwood Irish bar known for being a hangout for Blues alumni, players, and fans. It was where Jon Hamm hung out at when he was town, and where Craig Berube and his coaching staff would end up at after a hard night's work. While the restaurant and bar was closed for a private team party yesterday, hundreds of fans packed the lot outside. So much, the police had to show up and close off the adjoining streets.

The Whole Foods crowd wondered why so much noise was filling their minds as they carted off their organically-grown lemon peppered chicken breasts to the car. The folks at the Bread Company couldn't read the Wall Street Journal without hearing certain hockey language being screamed across the street. Oh, and the guy printing those posters at FedEx Office couldn't stop staring.

It was the ultimate party. Faithful addicts, loyal representatives of the Blue Note, and plain old adopted hockey fans. When the sun went down, the players came down to the lot and drank with the fans. It was the kind of celebration that St. Louis simply didn't know until this week.

4) Colton Parayko is THE party animal

Out of all the players, it was the young Blues defenseman who wouldn't let the night die. He wasn't just burning the candles at both ends; Parayko was the candle on Thursday night. Before a police cruiser carted him off to a place where sleep could be had, he was dancing and singing with fans in the parking lot while wearing a shirt that was soaked in beer, sweat, and happy tears. Remember when Alexander Ovechkin got nuts last year during his celebration? This year, Parayko wore that hat in St. Louis. He gave Brett Hull a run for his money.

3) Ryan O'Reilly is one tough dude

It was revealed after Game 7 that the center had been playing with a cracked rib during the playoffs. A couple nasty hits he suffered in the Winnipeg series put him off, and the injury intensified during the Dallas series. By the time Boston came along, he was healed up, and the Bruins got his worst. O'Reilly joined Wayne Gretzky as the first player to score in four consecutive Stanley Cup Final games, and he took home the Conn Smythe trophy, which he showed off at OB. Clark's. Out of all the stories, outside of Jordan Binnington's rags to riches tale, O'Reilly has the best.

A year ago, he was cleaning out a locker in Buffalo, unsure of his future. He only had a cup of coffee with Lord Stanley's troops at that point, wanting badly another opportunity. He got it, tallying 23 points in the 26 games, saving the most damage for Boston. O'Reilly put up five goals and nine points in the deciding seven games.

He was his best self, which happened to be the same prototype that helped the team out of no man's land in the season's early struggles. The Blues may have found their head coach and goaltender, but they also found their center.

2) People around the country prefer the Blues and Stanley together

Hockey team bachelor? Not quite, but the ratings on the Final did reveal something incredible. Stanley Cup winning wasn't the only form of history making this week for St. Louis. Apparently, people around the world like watching the Blues in the playoffs. Game 7 was the most watched U.S. NHL game on record. The Stanley Cup Final finale helped NBC post the most-watched playoffs on record. Singing the blues is one thing; watching them conquer the impossible is another. There's nothing quite like a Game 7 winner-take-all matchup, but this one was extremely popular.

1) The Cardinals are officially put on notice

With the lack of postseason action from the neighborhood golden child, the Blues are slowly moving into the driver's seat when it comes to success, at least recently. I am not talking about revenue. The Cardinals could go 81-81 and still gross three million fans. I am talking about getting results. The Blues just won a Stanley Cup and were two wins away from the Finals in 2016. The Cardinals have won a single playoff game since the beginning of the 2015 season. They are struggling to stay over the .500 mark this season, and need reinforcements from the roster and help from outside the organization.

I'm said for years at the Cards are king in this town, because it was true. While they aren't second fiddle and the title of little brother is more debate than confirmation, the tide is turning in this town. Yes, it's a sports town. It's also a town that likes postseason play and champions. The Blues own one. What say you, Cardinals?

One more thing ... no one torched the town yesterday. What many thought would turn violent like other cities who win the ultimate prize never happened in St. Louis. There were no reported acts of violence or criminal activity after the win Wednesday night. Even St. Louis has class in the wake of history.

I haven't gotten there yet. The process of believing that this is a real thing. The Blues won the Cup around 40 hours ago, and the reality of St. Louis holding an NHL championship is still downloading into my system, buffering in my brain. And I'm fine with that. It's a long time coming.

1988 is when I first got into hockey, falling in love with Hull's one timer and loud nights at the Old Barn with my dad on school nights. Stopping at the McDonald's on Hampton to grab cheeseburgers so dad could pay the mommy tax after we got him late at night. 30 years later, I was sitting at Joey B's on The Hill talking about the Blues winning it all.

That's the true effect of this historical occasion. The moments shared between father and son, mother and daughter, father and daughter, friends and even long time rivals. The happiness that could be seen on faces across St. Louis gave the long wait purpose and extra weight to the celebration. For some, like local comic Angela Smith, the win was bittersweet yet comforting.

What happens now? More drinking, more smiling and the recognition that the halls of St. Louis hockey history are barren no more.

It's time for a stress-free glass of bourbon. After all, training camps launch in less than three months. Soak it in, St. Louis.

Mike Bush: Game 7 was one of the best nights of my career

For the Blues, the party raged on at OB Clark's