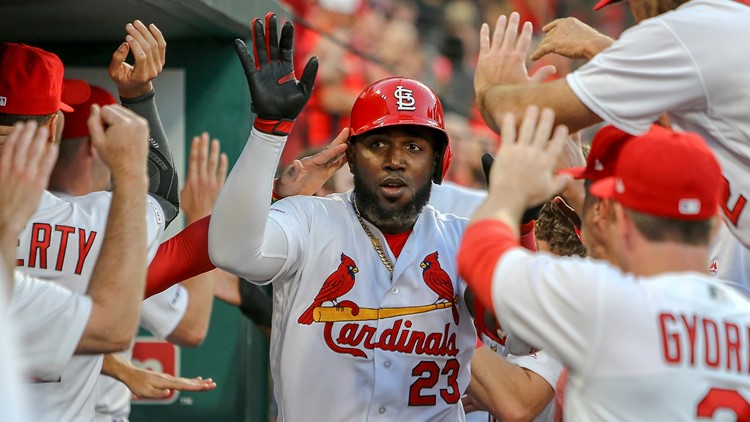 Reason No. 1 why baseball is such a romantic sport? Watch a fanbase react to the team's first month of games. You'll see hot and bothered, triggered, restless, and removed from comfort all in less than ten tweets on social media.

The St. Louis Cardinals are 5-5 on the young season, which isn't a bad start with all things considered, but still disappointing in a few ways. It'd be nice if they were 10-0, tops in the league in batting average and earned run average, and having teams request a forfeit on getaway day. With steady hopes and more pressure on the franchise in 20 years, patience just isn't there. The fans are demanding more from these Redbirds, so let's pop the hood and see what's happening.

In some universe with infinite amounts of coffee, I plan on doing this every ten games. Last year, it was five takeaways after every game. There isn't enough cheap steak and bourbon for me to do that again, so let's go with five looks every ten games.

The Cardinals need more from right field this year. Whether it's Jose Martinez, Tyler O'Neill, or Dexter Fowler providing it, I don't care. So far, Fowler is 4-26 with a double and five walks. His defense in right field is still atrocious, and he's already gotten caught doing something ill-advised on the base paths. All eyes are on this guy, because he was the one who provided a negative WAR in 2018. He stunk, straight up. Smiles and good stories only get you so far. Due to a series of unfortunate circumstances, Fowler is a starting outfielder. He's hitting the ball harder, getting better looks, but the team needs more games like Sunday, where he reached base four times.

Then again, Martinez is just 1-20 so far. The Cafe is serving decaf coffee, and it's not helping his chances of starting more often. O'Neill has mainly found himself coming off the bench, and he is 4-16 overall.

So far, kind of puny in right field.

Fowler wasn't the only Cardinal thrown out on the base paths. Harrison Bader was thrown out trying to sneak to second base on Sunday as well. If there's one thing the Cardinals haven't been good at in three years, it's the simple fundamentals. Running the bases hasn't been a pretty sight, and this team can't afford to lose base-runners on foolhardy plays.

The Cardinals lead the Major Leagues with 99 strikeouts. Paul DeJong, Matt Carpenter, Paul Goldschmidt, and Marcell Ozuna are already in double digits, and the team struck out 15 times in two straight games. In the Majors, that's a felony. Plate discipline isn't a lost art yet. I don't care how the league looks with heaters and long balls. Striking out so much without facing a Cy Young winner in your first ten games just isn't right. Fix it, Mr. Albert. You shouldn't have nearly triple the number of strikeouts that you do walks.

Opponents have struck 82 times and drawn 15 more walks than the Cardinals.

In disheartening news, the Cardinals only have ONE guy hitting over .300. His name?

Kolten Wong is slashing .394/.447/.788 with three home runs, a pair of doubles, and a triple. More impressively, he's only struck out seven times and drew four walks. Add that to the stellar defense, and you have the best start yet from the veteran second baseman. Listen to any interview and Wong sounds like a free man, someone who has been in baseball jail for years. Under Mike Shildt, the Cardinals haven't simply gotten a good player back; they have a potential All Star and MVP in their midst.

Wong is slugging, reaching base, and creating havoc. What more can you ask for? The sun, but I'll take what this Hawaiian hot rod is dealing. He's got half of the team's four stolen bases and could push for more. He's finding different ways to reach base. Take Sunday for example. With the infield napping late, he deadened a bunt down the first base line, scoring Yadier Molina. He can bash it 400 feet or push it 40 feet towards first base. That's deadly and unfair.

In the field, he's forming a nice alliance with DeJong. Routine plays don't eat him up, and the harder ones are looking easier to convert. Is he a great #2 hitter? Sure, but I wouldn't move him from a comfortable spot.

On some days, the bullpen looks dynamite. Monday, the unit provided cover for Miles Mikolas, who gave a gritty six inning performance. John Gant went two and Jordan Hicks completed his second save of the season.

Other games, they haven't provided much relief at all. More like stomach aches and minor hernias. Alex Reyes came into the season with high hopes, but those were dashed when he allowed the game-winning blast on the home opener. He's now in Memphis reloading. Hicks is still a little erratic, and blew a save in Milwaukee, but can also look unhittable most nights.

Gant has been brought into a couple games where John Brebbia should have been called. Brebbia, by the way, has looked great, which should come as little surprise. Free agent signing, Andrew Miller, gets cheered when he actually records an out. He's looked mostly like white hot garbage, more 2018 Miller than 2015-17 Miller.

Dominic Leone has walked three in 5.2 innings of work but has looked OK overall. Consistency is what this group needs. Assignments and roles would also be nice.

Sadly, the first baseman hasn't gone 25-25, but he is a force already. Goldschmidt has five home runs, nine walks, and is providing juicy opportunities for the batters behind him like DeJong and Ozuna. He's got a lot of strikeouts and two errors in the field, but what he's showed in the first ten games is that he is a difference maker who can affect an entire lineup. When he reaches base, the man scores. 7 hits and 7 runs scored. There's room for improvement, but I'll the filthy pop.

What else? Mike Shildt is leaving relievers in too long, may have to shift his lineup around, and double-switches his cleanup hitter out a ton, but is still feeling out this roster. The starters need to go deeper into games, but that usually occurs as the calendar turns to May. Bader's bat has some thump, and his defense in center field has already nabbed two base-runners. Yadier Molina's bat is heating up, and he's still got a great arm to second. Marcell Ozuna may pound more baseballs into the ground than most sluggers and his arm may resemble Jon Jay's noodle limb in left, but he's hit two baseballs a long way. The Cardinals have 16 home runs but need less strikeouts.

Adam Wainwright dazzled on Sunday but struggled in his previous start. Jack Flaherty and Dakota Hudson throw too many pitches, but are still breaking into the big leagues, figuring MLB hitters out. Michael Wacha walked 7 on Saturday but has a low ERA.

They are playing a lot of close games and have won three games where they took the first half of the game off. While they are troublesome, the Cardinals aren't doomed. Like Mikolas on Monday night, they find a way to win without their best stuff. That can only last for so long. Precision and consistency are needed, especially when the Milwaukee Brewers look for real and already have three wins against you.

Small sample size and all, those numbers aren't dreadful, but will start stinking as the temperatures rise.

Here's the thing. It's far be it from me to tell someone how to fan in this game but let me give you some advice. There's a difference between being critical and negative. The Cardinals strike out too much, their bullpen gives too much, and the 3-4 hitters in the lineup need to be feared. It's okay to say things aren't right without being hateful. Just don't panic. There are 152 games left. The season is built for endurance and not speed, so hang in there.

Thanks for reading, and please tip your writer by following Buffa on Twitter, @buffa82.