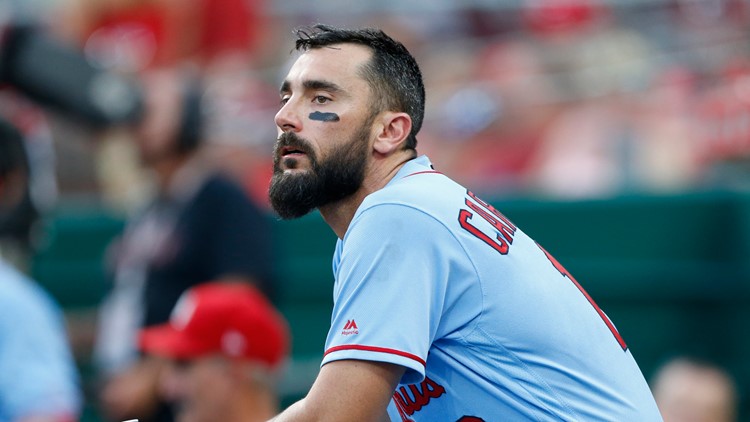 Photo by: AP
St. Louis Cardinals' Matt Carpenter watches from the dugout during the fifth inning of a baseball game against the Cincinnati Reds, Saturday, Aug. 17, 2019, in Cincinnati. (AP Photo/Gary Landers)

ST. LOUIS — When the Cardinals took the field on Thursday, Matt Carpenter stayed in the dugout. The same thing occurred on Friday. That's exactly the way it should be. The glory days for him may just be over.

The time comes for every player. A wall presents itself, and the player runs into it with reckless abandon, confident that they can get through the barrier.

Carpenter may not be done as a producing infielder for the St. Louis Cardinals, but the time has come to re-assign him to a bench role on this team. A baseball team that is currently wrestling with the Chicago Cubs for the division and seven other teams for two wildcard positions. With 33 games left, there's no time for experiments or veteran reprisals.

It's not an easy decision for Mike Shildt, nor should it be. In every season since 2013, when Carpenter became a full-time player, he's recorded 3.1 fWAR or higher in each season. Carpenter hit 7.2 WAR that year when the team went to the World Series. There have been ups and downs, but by the end of September, Carpenter was a producer. So far, in 98 games this season, he's given the team 0.4 WAR, which is less than he did during part-time duty in 2012.

He's taking too many pitches, not getting around on the fastball, and being eaten alive by the shift. The worst part about the season-long slump is the lack of on-base percentage from Carpenter, who carries a career mark of .372. This year, Carpenter's slugging percentage can't even top that mark. The slash line sits deplorably at .212/.323/.363. All are easily career lows for the 33-year-old vet, and there's no cure in sight.

This isn't like 2018, where Carpenter barely got over the .200 average mark until a surge struck his bat in the third week of May, carrying him to MVP status all the way into the middle of August. When many were ready to jump ship last year, Carpenter proved them wrong, achieving 5.0 WAR, 36 home runs, 42 doubles, and a career-high .523 slugging percentage. Those big days seem like ancient history as Carpenter served as a pinch-hitter the past two nights.

It's the right move. There's simply no conceivable reason to start Carpenter more than twice a week right now. It's the epitome of counter-productive. He is striking out a lot, walking less, getting stray hits, and putting together no semi-hot streak. You could gather Jeff Albert, all his tech, Mark Budaska, John Mabry, and a few other hitting coaches-and it wouldn't help Carpenter. He's a man apart, stranded in that isolated slump zone. There is no cure, especially in late August.

The statistics back it up the problematic season. The walk rate is a career low 13%. The useful stat, wRC+, tabulates the runs created by a player, factoring in ballpark and pitcher ERA. Carpenter wRC+ was 158 last year, which is 58 points above average. This year, it's a pitiful 84. Carpenter is hitting less fly balls, making less hard contact at the plate, and just not getting around on the same pitches he crushed last year. The only redeeming factor is the low-ish .269 BABIP, which is batting average on balls put in play. Then again, the bad luck Carpenter truly is finding happens to be the shift, which can frustrate a primarily pull hitter.

Now, this isn't to suggest Carpenter can't recover what was lost next season. He was given an extension, one that many argued wasn't necessary yet felt initiated by his comeback last season, so he will be here another couple seasons. Everyone witnessed what Dexter Fowler went through last season at a similar age to Carpenter, and 2019 has been a resurgence for the Cardinal outfielder. If Fowler can do it, so can Carpenter, who is a superior hitter.

But that's a question for 2020, not 2019. One can only hope Shildt and company continue to leave Carpenter on the bench. If the bases are loaded, bring him up. Let him get a start here or there, be a pinch-hit option like he was on Thursday night, and work around that area. If there is one thing that connects Shildt to his predecessor, Mike Matheny, in an unhealthy way, it's the reluctance to deviate from veteran loyalty. In comments made to the media this week, Shildt seemed to lean on Carpenter's production in recent years as a reason to keep playing him. That's just unpractical baseball management. Thankfully, common sense took over these past couple games.

As I said, the time comes for every player. The downfall. Carpenter will be 34 years old this Thanksgiving, which doesn't bode too well for a return to his 4-5 WAR days the next couple seasons in St. Louis. Fans, along with the team, will have to re-adjust their expectations as the twilight of Carpenter's career settles in.

This must be said. Please don't join the crowd calling Carpenter an overpaid ballplayer. The large crowd on Twitter attacking his feed when he posts about his new Schnucks cereal or the ballpark he opened for kids this week in the area need to get a grip. That's just heinous activity that doesn't need to happen in St. Louis. Carpenter is anything but overpaid. In his career, he's produced 28.9 fWAR for just $50 million. You can do the math if you'd like, but I'll save time and say it's a huge bargain. The $18.5 million in each of the next two season will expire before Carpenter turns 35, so it's not an end of the world scenario. You can call him overpaid in two years, but not now.

It's ugly when fans grow hateful towards a player when he experiences a tough season. It was all over the internet with Fowler last year, and as Carpenter's 2019 has stretched its legs from slumping to severely struggling, the comments are just nasty. Stop that and show some respect.

Here's the thing. Carpenter was a great Cardinal once upon a time, but he's not anymore, so it's time for him to be a bench player. That doesn't mean you completely lose your respect for him and start showering him with hard knocks. Trust me, he knows how bad it is right now. The whispers in his head are turning to shouts. The magic is gone, but he's not hopeless. 2020 is where he can try to get some of it back.

Benching Matt Carpenter will be Shildt's first test as a MLB manager. So far, he's doing well. Let's hope he doesn't return to veteran loyalty hazard, a familiar shade for the previous manager. Don't go there, Mike. You're better than that. Let your actions speak louder than your words.