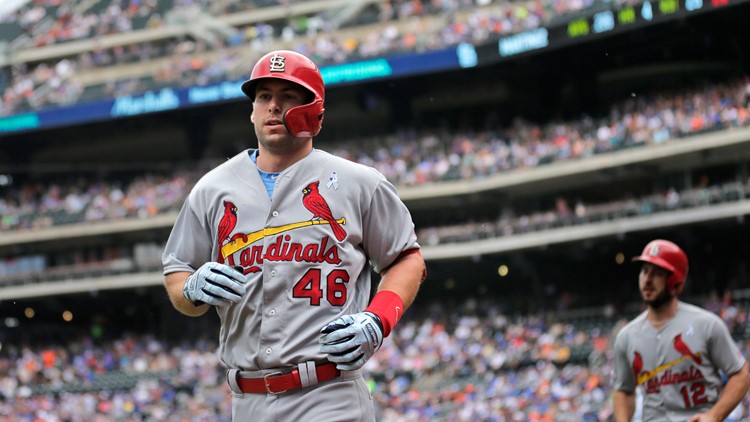 Photo by: AP
St. Louis Cardinals' Paul Goldschmidt returns to the dugout after hitting a two-run home run during the first inning of a baseball game against the New York Mets at Citi Field, Sunday, June 16, 2019, in New York. (AP Photo/Seth Wenig)

Opinion | With the Blues winning the Cup, the Cardinals are officially put on notice

ST. LOUIS — It's been written dozens of times and memorized by now. The Blues and Cardinals work in unison in St. Louis, coming together for special events and supporting each other at games and around town. The story is a crisp one, promoting synergy instead of spite, which is what Stan Kroenke did in hijacking the Rams and leaving town.

However, to borrow a well-traveled John Mozeliak line, at the end of the day there is a competition between teams in one city to win and win often. With the St. Louis Blues winning the Stanley Cup and having more recent postseason success, the Cardinals have officially been put on notice. The three million-plus fans who pack Busch Stadium and Ballpark Village demand more than 86 wins a year and a few thrilling winning streaks.

I know what you're thinking: historically, the Cardinals still hold a healthy edge, and that's true. But this is a "what have you done for me lately" kind of business, and the boys of summer have only given the fans an extra dose of humidity these past few summers. They've won a single playoff game since the start of the 2015 postseason, which was the embarrassing effort in the Division Series against the Chicago Cubs, who haven't relinquished control of the rivalry edge in the following years.

This past offseason, the Cardinals brought in Paul Goldschmidt and signed Andrew Miller, but didn't pursue additional bullpen help or help the questionable rotation. Now, Adam Wainwright is hurt and Michael Wacha has been in and out of the group. Miles Mikolas isn't the same guy he was last year. Jack Flaherty and Dakota Hudson are impressive, but little more than six inning arms these days. The options inside the organization aren't pretty with Austin Gomber and Ryan Helsley hurt and Daniel Ponce de Leon shuffling between Memphis and St. Louis.

Once promising prospect, Alex Reyes, currently holds a promise to disappoint or frustrate, being unable to make the final step to realized phenom status. Carlos Martinez, through an awkward series of events, is stuck in a bullpen role that lacks definition.

The pitching isn't even the worst part. The lineup has failed to produce consistently after a fine April launch. There are far too many games where this team struggles to score three runs in a game or win three games in a row. It shouldn't be that hard for a team carrying a $162 million payroll to stay above the .500 mark, yet here we are in the middle of June, and the deep end is suffocating the Cardinals.

Paul Goldschmidt is starting to get it going, but then again, before Sunday's game, he was slugging .362 in his last 30 games. Matt Carpenter's on-base percentage is rescuing his overall sub-par hitting, and everyone else is doing just enough to stay above average. Marcell Ozuna and Paul DeJong have been the only true stabilizing forces, but even they go missing for a week or so.

The Cardinals rank among the middle or back end of the pack in many offensive categories, including batting average (19th in the Majors), on-base percentage (14th), and slugging percentage (21st). Those aren't terrible numbers, but a pitching staff that is less than stellar needs more pop from their bats.

The bullpen may be the most impressive feature on the team, featuring arms like Jordan Hicks, John Gant, John Brebbia, and Giovanny Gallegos. When you have four arms that strike guys out and can get the job done with consistency, a bullpen works like a high-level kitchen of seasoned cooks.

Yet a relief corps can only do so much when it comes into a game that usually carries a deficit or there's little confidence the team will score runs. The Cardinals need all three units to work better. They also need Mike Shildt to get back to the daring skipper he was last season after he took over.

Complacency isn't a good quality for a first year manager to exhibit, but indecisiveness is far more detrimental. On more than a few occasions, Shildt has left a starter in to cook for extra runs or failed to adjust a struggling lineup. I'm not one to blast a lineup card every day, but if a week goes by and your team is averaging two runs per game, make a change. Perhaps Shildt is being too careful not to be Mike Matheny or there's an extra layer of pressure to pull the team out of hibernation.

After all, missing the playoffs four seasons in a row would be a trend that no team wants to put up in front of their house. One or two seasons can be seen as transitional, but four means a disease has developed inside the organization. What happens when you're making lots of money with an average team? How motivated are you to put the team over the top, roster wise?

It took the Blues 52 years to win it all, but they are suddenly in the driver's seat in this city. The rabid celebration that packed somewhere between 400,000-500,000 people into downtown was a hard-to-miss sign that things have changed with the structure of teams in this city. The Blues were two wins from the Stanley Cup Final in 2016, recently hosted a Winter Classic, will host the All Star Game next year, and currently have a travel buddy named Lord Stanley in their possession out in Las Vegas. The Cardinals are 36-34 on the season.

Saying the Cardinals are the little brother carries more debate than cement, I'll admit, but it's not outside the realm of possibility to say the tide is turning. It's not like the Birds aren't trying. The team payroll of $162 million is $27 over the league average, but there's moves to be made in order for this team to become a serious contender.

Not all hope is lost. The Cardinals have won seven of their last nine games, matching their win total of May with nine wins already in the month of June. The upcoming schedule of the Miami Marlins, Los Angeles Angels, Oakland Athletics, San Diego Padres, and Seattle Mariners offers St. Louis a chance to get back into the race in a real way.

It's not too much to ask of a team that constantly points out that winning is very important. The Cardinals have become a team that one would hope makes the playoffs. What happened to the days of certainty in that regard?

The Blues and Cardinals have worked together seamlessly over the years, but when it comes to the action on the field/ice, one is making an impact while the other is fading. I know this doesn't go well with the Kool-Aid diet of some fans who don't want to hear negative realism, but someone has to write it.

The Cardinals need to do better, and hopefully were inspired and challenged by the sea of blue all around this city the past week.