Colton Parako is riding out the pandemic here in his second home of St. Louis, finding creative ways to stay in shape while waiting for hockey to return

ST. LOUIS — A number of his teammates tried to wait out COVID-19 and remain in St. Louis.

But when it became obvious this was going to be an extended layoff, a number of those players decided to head home, whether it be Canada or Europe.

Parayko decided to pitch his tent in St. Louis, spending the entire coronavirus pandemic getting to know his second home city more while waiting for the NHL season to resume.

And he did so for good reason.

"I was planning on heading back at different points throughout this all, but just as we were continuing to go along, I kind of felt like we were maybe getting closer to playing," Parayko said. "If I would have had to go back to Canada, I would have had to do the two-week quarantine and then obviously waiting to see my family anyhow. I wasn't sure if I was going to have the time to go there and quarantine for two weeks and then by the time to come back here, had to quarantine (again) and get ready to go so it would have been months. I was kind of looking at that perspective. I wasn't sure exactly when we were going to start up again."

Blues forward David Perron and defenseman Marco Scandella went back to Quebec; forward Sammy Blais (Quebec), defenseman Vince Dunn (Canada) and center Robert Thomas (Canada) all remained in St. Louis for a while before going back home. Center Oskar Sundqvist is in Sweden, to name a few guys that left.

Some guys thought best to go home and sacrifice the quarantine time. Parayko wasn't about to risk it.

"Some guys obviously got to go home, and credit to them for making that decision," Parayko said. 'If I would have understood it was probably going to go this long, I would be home and visiting with my family and seeing my family. I wasn't sure of the timeline. 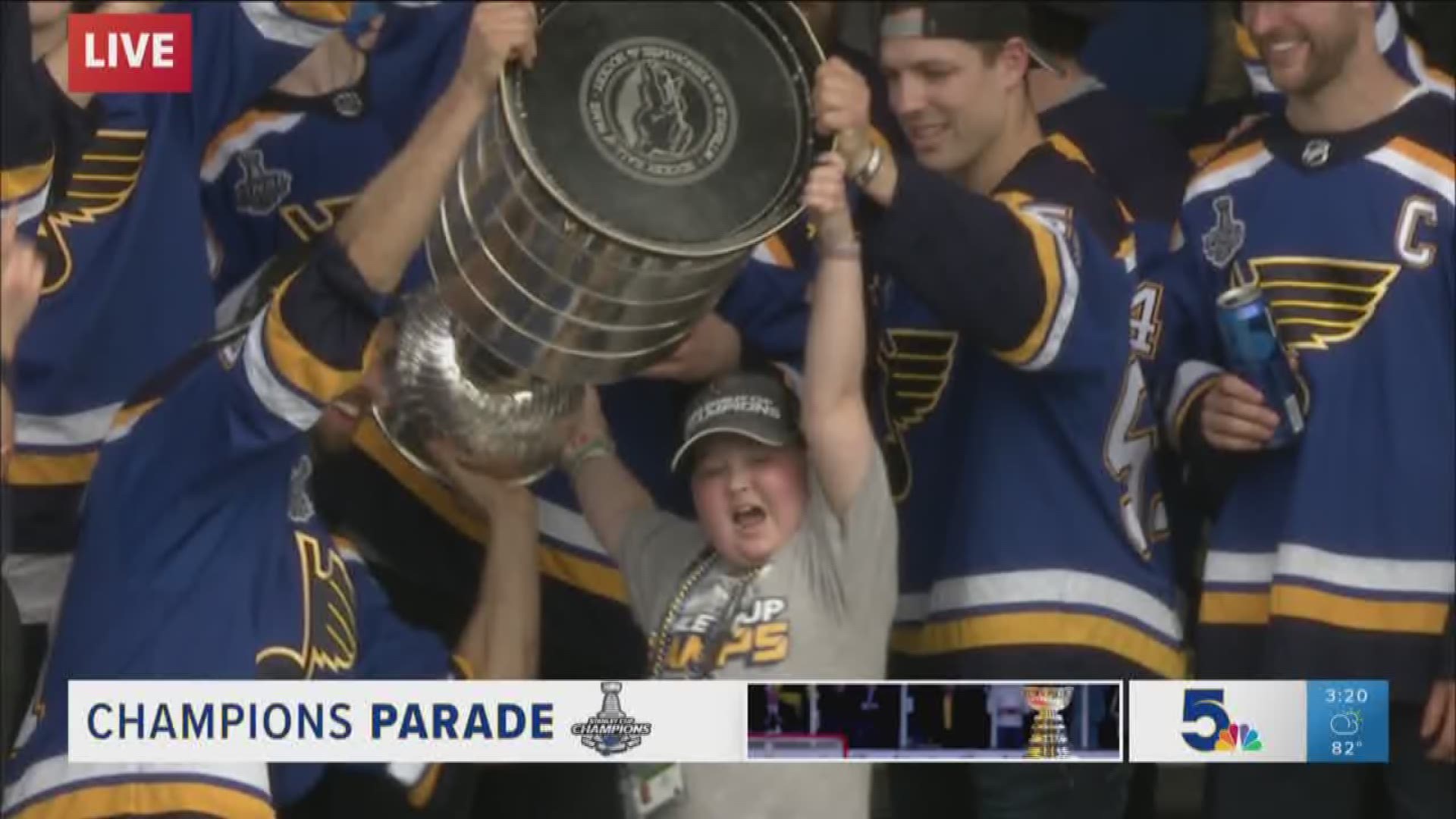 "I do have a home here, so it's nice that way. I don't have a home back in Canada. Not that that was really a big difference. My parents were hoping to have me back home, but I just wasn't sure when we were going to get back and I didn't want to quarantine for two weeks, maybe spend a week with them and then all of the sudden have to turn around and come back here and quarantine for two weeks. The weather was good here. The weather was nice and warm. Back home, when this all started, I believe it was snowing. It snowed a bit the other day. I'm fine going out on walks and stuff and it's been nice weather. I haven't been going out to different events and stuff like that, but I have been going on a bunch of bike rides. I've definitely been to places that I haven't been to before, which has been cool. It's been a good opportunity for me to just sit back and have some time alone. Obviously we're going 100 miles an hour when we're in-season, so it's just nice to kind of regroup and get ready when we start up again."

Parayko, who was arguably playing his best hockey of the season when the season stopped, picking up 15 (eight goals, seven assists) of his 28 points the past 18 games, was probably one that wished the season didn't stop on March 12. His chemistry with new partner Marco Scandella looked so seamless. The two picked up where Parayko and Jay Bouwmeester left off, even though Bouwmeester and Scandella are different players. It just shows the versatility of Parayko's game and his ability to play with anyone.

"I thought I was kind of trending upward as we continued the season," Parayko said. "I thought I was still playing good at the beginning, but as the season went on, I felt like I was getting more opportunities and more chances and they were just going my way. Sometimes you'll play a portion of the season, you get those chances and they don't go your way and then you'll play a portion of the season and you just don't even get those chances at all, but sometimes you find a way to make it work. It was a good time for myself.

"Obviously you mentioned Scandella, we were just getting used to different tendencies, how we play together and we all realize he's a really good player and easy to play with and he's vocal. That was nice to have him on my side there. I'm looking forward to getting that back up and running when things get back to normal when we get back on the ice. ... It was good to capitalize on a few of those chances and maybe getting ready for when everything gets going again."

Parayko, who averaged 23 minutes a game in 64 games this season, said he's kept in touch with teammates, especially those that have stayed here throughout, including Alex Pietrangelo, Ryan O'Reilly and Brayden Schenn, has found ways of keeping himself in shape while getting no ice time.

"I do some at-home workouts," Parayko said. "I think a big part of it as well is that skating is so much different than any of the workouts that we do in general. I've been doing a good job of keeping up with my fitness and making sure that I'm getting in some workouts throughout the week, making sure than when we get back at it that it's going to be an easy transition than it should be. As soon as we hit the ice, it's not going to take too long to get back in shape. Hopefully I'm in shape enough that it's just going to be those things, getting coordinated again with the puck, getting everything dialed back in, shooting, passing and stuff like that. I just try to do my home workouts, trying to get on the bike. I got some roller blades, I've been roller-blading a little bit. Just staying active in different ways. I think that's the tricky part of this whole thing is trying to find different ways to stay active throughout it. You just try to find different ways to stay fit and enjoy it."

Parayko is the Blues' player rep with the NHLPA and was involved in all decisions/discussions regarding the Return to Play format. He said the Blues' yes vote regarding the 24-team format involved much discussion but when all was said and done, one conclusion was the obvious choice.

"It's one of those things where you try and approach it from all different angles," Parayko said. "Even if you look back at it from a week by week perspective, there were different proposals weekly, different ways I think we can approach it. We wanted to make sure we looked at it from all angles. We didn't rush it.

"At this point, is everything going to be fair? Probably not, but at the same point, what is fair and how do you even put fair on the table? There's a good chance for teams to obviously play in and get into the playoffs and then it's going to be regular playoffs from there. It's what you have to do, it's different circumstances and that's just the way it is. ... It seems logical for what the outline was, having 24 teams because there's still teams that had the chance to make the playoffs. I don't really like the word 'fair.' I know I used it earlier and I probably shouldn't be using it. It just seems the most logical (proposal) to make sense for everybody. Hopefully it all works out."

Parayko said the Blues finishing in any of 1-4 seeds isn't a concern. He pointed to last season as proof. He likes that they'll get the chance to play meaningful games before the actual playoffs begin.

"It's good that we have that bye in the beginning, which is nice for us where we've earned that by playing well this season," Parayko said of the Blues' 42-19-10 record, including 10-2-0 the final 12. "Those games to reseed will be intense and get us ready for it moving forward. It'll be a good opportunity for us to just get back to normal pace. After that tournament, we want to be hitting our best games. Maybe if we don't necessarily seed first or whatever, I think it's going to be a good chance for us to just build our game and be ready. Last year we weren't the first seed. We're a good road team too."

Perhaps the most surprising aspect of all this was, as Parayko said, nobody expected when the Blues stepped off the plane upon returning from Anaheim, it would be several months before another potential game would be played.

"Initially you don't really know what to expect," Parayko said. 'It was new for everybody. I personally didn't think it was going to be something that lasted this long. Obviously at that point we didn't understand just how serious everything was going to get and how it was going to go with everything. Just revolving the health and safety of everybody and obviously that's the biggest factor of it all and the No. 1 thing that you want to make sure everybody is healthy. Obviously it was something you don't really see happening and right then and there, you get on the plane and hope you get things going again soon, but obviously it's totally undertandable that it's taken this long. We all understand. We all saw what happened in the world. It wasn't ideal to finish the season where it was at, but that's life and I think there are a lot of different things we need to worry about in terms of just our country and the world from a health and safety standpoint that it just made sense. That's the way it is and we're all on the same boat. Not just hockey, it's all the sports. There's no way you can dawn on it or look at it as a negative. It's just the way it is."