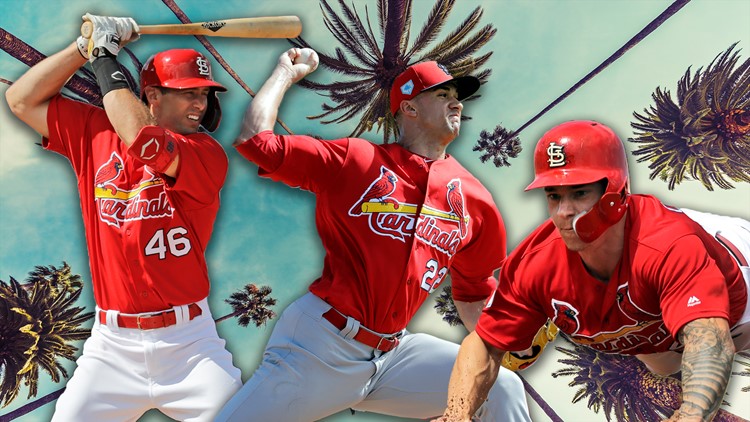 The five most impressive Cardinals so far in spring training

Spring training is a time to defrost from the offseason in the Florida or Arizona sun and get right for the regular season.

Every player gets up to speed a bit differently, and yes, spring training stats don't technically matter, but a few Cardinals have really gotten off to a fast start in 2019.

Here are the five guys that have gotten off to the best start (at least in in-game action) in 2019.

If you've been turning off spring games once the starters come out, you're probably thinking ... who?

Ravelo has been all over St. Louis TV screens so far in spring training.

The 26-year-old first baseman has 37 at-bats, the most on the roster so far this spring.

Obviously, he's not going to break camp with the Cardinals, but Ravelo has always shown he can hit in the minors and might attract some attention from another club if he continues to swing a hot bat in spring.

This is a 2019 photo of Rangel Ravelo of the St. Louis Cardinals baseball team. This image reflects the 2019 active roster as of Thursday, Feb. 21, 2019, when this image was taken. (AP Photo/Jeff Roberson)
AP

O'Neill has probably made the most noise so far in Jupiter this spring training with his four home runs, most on the team.

Some fans on social media have already even started to anoint him as a starting outfielder for 2019.

O'Neill's power has been impressive, but the strikeouts are still a major problem.

He's struck out in 12 of his 34 grapefruit league at-bats through Wednesday.

But, if he continues to homer every eight-and-a-half at-bats, he's going to be tough to keep out of a lineup.

The guy who's my dark horse pick to enter the NL Cy Young discussion in 2019 has been a strikeout machine so far in Grapefruit League play.

He struck out seven Philadelphia Phillies in a row last week.

The guy is absolutely filthy and looks to be ready to build off an impressive 2018.

So far, the new guy has lived up to his billing as a hitting machine.

We haven't yet seen his first homer as a Cardinal, but he does have two doubles to his name.

Just wait till he gets to mash at Busch Stadium.

RELATED: Meet your 2019 Cards: Paul Goldschmidt is ready to mash in St. Louis

24-year-old Dakota Hudson is rapidly barreling his way to a spot in the starting rotation in 2019.

Opposing batters are hitting just .200 against him so far this spring.

Before his start on Wednesday against the Marlins, he had yet to issue a free pass this spring as well(he did walk three batters against Miami).

Hudson looks to be up against John Gant, Austin Gomber and Daniel Ponce de Leon for a spot in the Cardinals' rotation to start the season, and so far has out-pitched them all.