The Cardinals had lost 20 of their last 25 games in Chicago heading into this pivotal series. By taking the first 2 games, St. Louis put a nail in the Cubs' coffin.

ST. LOUIS — It wasn't always a surprise for the St. Louis Cardinals to win a baseball game at Wrigley Field.

Back in 2016, the Cardinals managed to win six out of ten games over the Cubs in Chicago, but that seemed like ancient history coming into this weekend's crucial series.

On Thursday afternoon, the Cardinals were up three games on the Cubs in the Central Division, but hadn't been able to create a steady streak of winning, thus keeping the division in constant reach of Chicago and Milwaukee.

The Cardinals also had zero wins at Wrigley Field in 2019 before this week. The Cubs had swept them twice earlier this season, making the confines off Waveland Avenue particularly chilly. The first sweep in the first week of May helped bring the frantic start by the Cardinals to a halt. The sweep in early June left St. Louis five and a half games out of first place. 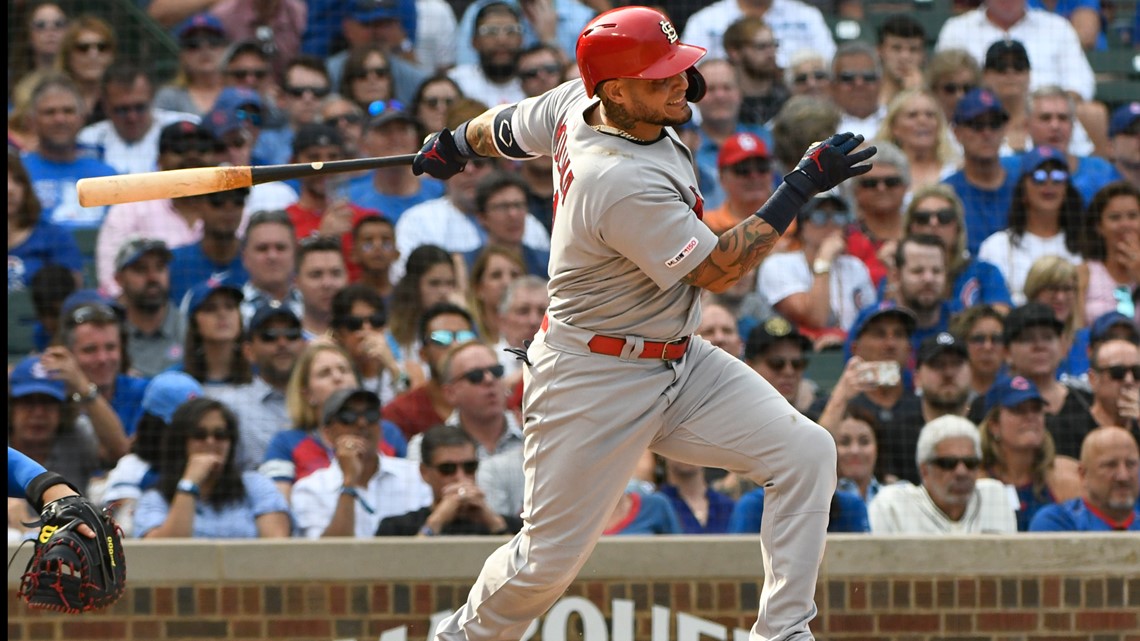 Cardinals rally in sixth inning, take 2-1 win over Cubs
ST. LOUIS - The Cardinals' problems getting hits with runners in scoring position has been well documented and it happened again on Friday, when they had only one hit in 11 chances with a runner on either second or third.

After a wild 5-4 victory on a Matt Carpenter extra-inning home run on Thursday night drained the Wrigley crowd, another close encounter on Friday afternoon almost went Chicago's way. In fact, if the wind was blowing out just a little bit, a Kris Bryant fly ball off John Brebbia probably finds the left-field stands instead of Marcell Ozuna's glove. That would have given Chicago a 5-2 lead. Instead, the wind knocked it down and the game was eventually won by the Cardinals with Carlos Martinez doing what he could not on Thursday: slamming the door on the Cubs.

It's comforting for fans to see celebrations at Wrigley in September instead of seeing St. Louis' postseason chances deflated by loss. It was just last year that the Cardinals lost the final game of the regular season at Wrigley, bringing their 2018 record against the Cubs to 4-6. Chicago would go on to lose in the wildcard game, but at least they got some kind of October ticket. 2018 wasn't as bad as the previous season. St. Louis was swept twice and finished 1-8 at Wrigley in 2017.

The 2-6 record this season doesn't look so hot on the page, but there is some context lost in translation if you stare too closely at those numbers. The past two days have featured the most important games of the season, because the schedule makers gave this wonderful rivalry a gift. Seven of the last ten games on these two team's schedules come head-to-head, helping two Midwest teams decide their fate.

It hasn't been easy. Martinez blew Thursday's game, giving back a 4-1 lead and depriving Jack Flaherty of a win on his record (pitcher wins are a joke). Friday was another heart attack ride, with the lineup once again being unable to put Chicago away, going 1-11 with runners in scoring position. These Cardinal bats are anemic with runners near home plate, and if that doesn't change, October won't be a happy place.

Think about it. If it weren't for Yadier Molina slapping a base hit up the middle to score a couple runs, the Cubs would have prevailed and kept a division title hope alive. Instead, they will desperately cling to the hope of a wildcard berth. Baseball pays zero favors with a fan's mood or a writer's nerve-endings. It's relentless and full of twists and turns. Speaking of relentless, Molina's toughness was tested once again when he took a foul tip off the private midsection.

The latest turn has played in St. Louis' favor. They managed to win a game started by Michael Wacha, which seems like a bonus these days due to the fact that the coaching staff doesn't let him go deep into games, thus inducing a bullpen game. So far, they have won a game in which they wasted Flaherty's brilliant start, and prevailed in a game started by their worst rotation arm.

Dakota Hudson and Miles Mikolas await Chicago now. The best a Cub fan can hope for is a three-game deficit heading into Monday's games, which would equal out to zero room gained in the original deficit.

All the Cardinals had to do was gain a split in this series, and they have done that. They've rebooted the winning ways at Wrigley, even in the most roller coasting riding fashion possible. Ups, downs and the most implausible methods known to this team this season have taken place during the past 48 hours.

On Thursday night, it was the Mendoza line-battling Harrison Bader with two key hits and the new part-time playing and .236 hitting Carpenter who won the game. Friday, it was Molina taking care of all the offense while the rest of the lineup couldn't pull the trigger while rookie Ryan Helsley recorded the win.

It doesn't all have to make sense; a win is simply required in the end. It's all about waking up the next day, looking back and wondering how in the world they pulled a win off with four hits and six pitchers before finding comfort in the truth of the run column in the box score.

Here's the thing. It's late September and the Cardinals are looking down at the Cubs for a change. Things are changing in the Central. An old king is returning to the throne, feuding off the attackers after a four-year journey into the depths of mediocrity.

This particular king wears red with a bird on its chest.

RELATED: A panda is the mascot for the 2022 Beijing Winter Olympics