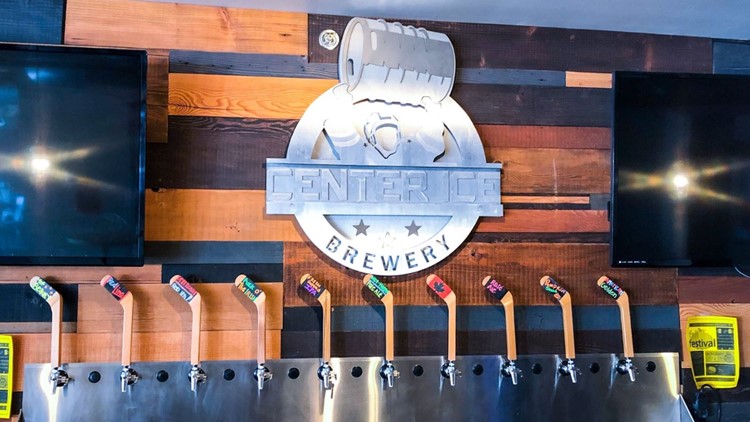 The Old Arena lives on at this hockey-themed St. Louis brewery

This story is a companion piece to the Abby Eats St. Louis podcast titled "Let's Go Brews!" You can download podcast for free in your favorite app store or by clicking here for Apple Podcasts and here for Google Podcasts.

ST. LOUIS — This town has feasted on the glory of a Stanley Cup championship for months. And now, we have another hockey celebration to look forward to: NHL All-Star Weekend.

St. Louis once again will be the center of the hockey universe as some of the best players in the league descend on the city to show off their skills, face off in a game and have a little fun.

If you’re looking for a place to take in all the excitement, why not go to the city’s first and only hockey-themed brewery: Center Ice. It was started by a beer enthusiast who has been a hockey player and Blues fan for as long as he can remember.

“So, I started playing in the streets as a kid, 5, 6 years old. Street hockey, roller hockey, ice hockey. And then I have that love all the way through high school. And then, I fell in love with craft beer from 2010 ‘til now. So, you have this area of both hockey and craft beer that I love immensely,” said Center Ice Brewery owner Steve Albers.

But his bar has a great story of its own. This city’s hockey history is literally ingrained in the bar itself. The planks that make up the bar top, most of the tables and the wall behind the bar are all made with wood salvaged from the St. Louis Arena.

How the Old Barn became part of this new bar

Whether you call it the Checkerdome, the Old Barn or the Old Arena, St. Louis’ first hockey home was where big events happened in St. Louis for 65 years, where millions of memories were made. It was demolished in 1999, but parts of it still have life inside Center Ice Brewery.

It all started as Albers was exploring his craft beer future. While brewing beer at his home, he asked a woodworker he knew if he could make a couple hockey stick tap handles.

“And he’s like, for sure. And he said, ‘Would you like this made out of wood from the Old Arena? And my jaw just hit the floor because being a hockey kid from St. Louis, like, that’s so cool.”

That was back in 2011, six years before Albers would open Center Ice in Midtown, sharing the same building as Pappy's and Southern.

“He said, look, if you ever raised the money for your brewery, I’ll introduce you to Roger who has the wood,” Albers recalled.

“So, we drove out to Bourbon, Missouri, and the wood, it was just sitting on his farm for the last however, 10, 15 years. The story is Roger went down to the Old Arena when they imploded it and made a deal with a wrecking company to buy it all. He didn't want to see it go to waste. That was literally why he bought it.”

After a little convincing, Albers said Roger sold him the wood. His woodworking friend who originally introduced the two brought the hockey history back to life by sanding it, staining it and branding it with the old logo.

And with those memories, St. Louisans have opened their arms to Center Ice Brewery—and are now giving Old Arena memorabilia to the bar. An old diamond window from one of the towers. A copy of the original building blueprints from 1929. A copy of the score sheet from the first game the Blues ever played signed by five alumni who actually played in that game.

Well, if that’s not enough to warm up your cold hockey heart, how about a piece of St. Louis hockey history touched by all the rule breakers in the NHL back in the day.

Center Ice has the penalty box door from the Old Arena. All thanks to Albers’ buddy Joey.

“I'm looking at this thing. It's super heavy, and I'm like, what the hell am I gonna do with this thing? So, he built the penalty box and turned it into a little photo booth.”

It’s special touches like that that give Center Ice a lot of character, but Albers also gave credit to his team for keeping hockey fans and beer lovers coming back.

“The message that we're trying to portray here at our tasting room is it's a fun, inviting, welcoming atmosphere,” he said, stressing that good customer service is at the center of what they do.

Come for the hockey, stay for the beer

“We have a lot of hockey fans that like Bud Light, lighter beers, right? And so, this is a place to try and convert them into trying different things,” Albers explained, saying the staff behind the bar loves to educate customers about their craft beers.

He called their Old Arena Lager a gateway-into-craft-beer option for Bud Light lovers.

“It’s a traditional American lager. It’s something that’s comparable to a domestic.”

But every time you walk into the brewery, it’s likely you’ll see a new brew on tap. Albers said they’re always experimenting.

Besides the Old Arena Lager, another favorite that has ‘stuck’ like a pickle on the glass is Center Ice’s brute IPA called The Beauty.

“It’s super dry. We add orange zest to it to spice it up. It’s a really nice, approachable IPA,” Albers said. “As I look at 2020 and the calendar year of what we plan to brew, I mean we've got some brand new stuff in the pipeline that’s gonna be a lot of fun.”

Speaking of a fun atmosphere, the night the Blues won the Stanley Cup, Albers literally crowd surfed in his own bar.

“It was a locker room celebration,” he said, admitting that he was in full-on Brett Hull mode.

Champagne was spraying. Beer was spilling. Hugs were happening. And tears were flowing.

“And uh, just to be here when they won the Cup, just, whoa. I mean, what a dream come true, right? It makes everything worth it.”