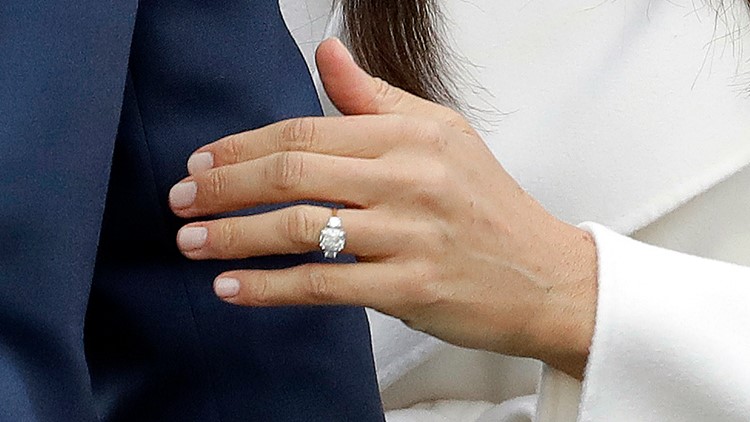 Photo by: AP
FILE - In this Monday, Nov. 27, 2017 file photo, Britain's Prince Harry's fiancee Meghan Markle shows off her engagement ring as she poses for photographers during a photocall in the grounds of Kensington Palace in London. (AP Photo/Matt Dunham, File)

When Prince Harry and Meghan Markle announced their engagement in November 2017, royal watchers around the world were anxious to see the ring. And when it was revealed, nobody was disappointed.

During an interview with the BBC, Prince Harry revealed he designed the ring, which had a solid yellow gold band, using a center diamond from Botswana, an area of the world that has significant meaning to the couple – their third date was to the country. He then had two diamonds from the jewelry collection of his mother, Princess Diana, placed on either side of the Botswana diamond.

“I think everything about Harry’s thoughtfulness and the inclusion of that, and obviously not being able to meet his mom, it’s so important to me to know that she’s a part of this with us,” Meghan said of her engagement ring during the BBC interview. “And it’s incredibly special to be able to have this, which sort of links where you come from and Botswana, which is important to us. It’s perfect.”

The ring was consistently seen on Meghan’s finger in its original state until the end of her pregnancy with Archie, when we saw her wearing only her wedding band.

After Archie was born, a ring appearing to be Meghan’s engagement ring returned to her finger, but it looked a bit different. It wasn’t until a close-up picture of Meghan waving during Trooping the Colour was published that we were able to see what had changed.

The once-solid gold band is now partially encrusted with pavé-set diamonds. It’s stacked on her finger with her wedding band and a new diamond eternity band.

For weeks, people speculated about whether the new engagement ring band was real or if she was wearing a look-alike ring.

Royal reporter Omid Scobie with Harper’s Bazaar reports Prince Harry asked Lorraine Schwartz to design a diamond eternity band for the couple’s one-year wedding anniversary on May 19. The ring features three birthstones on the underside of the ring – a sapphire to represent Harry, an emerald for Archie, and a peridot for Meghan.

The report goes on to say Harry also took Meghan’s engagement ring to Lorraine Schwartz to have the band updated.

Kay Quinn and Brandie Piper talk about the ring and many more topics during this week’s episode of the Royal Dish podcast. Stream below or download wherever you get your podcasts.