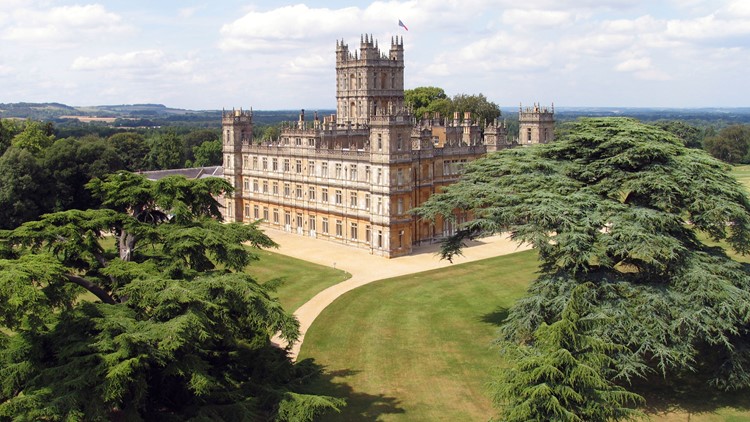 Photo by: The Office of The Earl and Countess of Carnarvon
Highclere Castle, Newbury

Highclere Castle: Why 'the most famous house in the world' looks so familiar

Highclere is so striking, it really becomes one of the characters in the show, and now we have a chance to see it on the big screen. It was the setting for the feature film 'Downton Abbey', which hits theaters September 20.

So, we thought we’d take a look at the history of Highclere and why it’s so popular in film and TV.

Highclere Castle is a 5,000-acre estate in Hampshire, England. It’s the country seat of the Earl of Carnarvon. The castle itself was designed by the architect Charles Barry.

According to the Highclere Castle website, the castle stands on the site of an earlier house, which was built on the foundations of the medieval palace of the Bishops of Winchester, who owned this estate from the 9th century.

Highclere Castle has been re-built a few times. The first house was a square mansion. But starting in 1842, it underwent a huge rebuilding and renovation. Sir Charles Barry designed the castle you see today in the Jacobethan style, which means it contains influences from the English Renaissance period, as well as the Elizabethan and Jacobean periods.

Besides the castle, there’s an Egyptian exhibition in the castle’s cellars.

Ancient artifacts are removed during the Cairo, Egypt excavations of the tomb of King Tutankhamen, Feb. 1923. (AP Photo)
AP

That’s because 100 years ago, the castle was the seat of the 5th Earl of Carnarvon, who famously discovered the tomb of the Egyptian boy pharaoh Tutankhamun in 1922. Lord Carnarvon made many trips to Egypt, and while most of his treasures ended up in museums, there’s still an impressive collection on display at the castle.

England's Lord Carnarvon, seen July 23, 1977 in Beverly Hills, talks about the curse of King Tut and the death of his father in Egypt after unsealing the 3,000-year-old tomb in 1922. (AP Photo/Nick Ut)
AP

The grounds of Highclere also are remarkable. Extensive gardens surround the castle as a sort of collection of habitats. In 1991, Highclere Park was registered as a Site of Special Scientific Interest.

Some of the gardens are open to the public for self-guided tours in the summer, and there also are public events at Christmas and Easter.

Monks Garden at Highclere Castle, Newbury
The Office of The Earl and Countess of Carnarvon

If this all looks familiar for some reason, it’s probably because Highclere’s been on heavy rotation among film and movie makers needing a moody setting for their project.

1982: It was seen as the home of a wealthy Englishman that Mr Fortescue visited seeking money in the 1982 film starring Michael Palin, 'The Missionary'.

1987: Shots from both the interior and exterior were used as the imposing Misselthwaite Manor in the Hallmark Hall of Fame's 1987 TV film 'The Secret Garden'. The same was the case for the film 'Poor Little Rich Girl: The Barbara Hutton Story' (1987), which starred Farrah Fawcett.

1990–1993: Totleigh Towers, in the TV series 'Jeeves and Wooster', was represented by Highclere Castle.

1991: The exterior appeared as Lord Graves's house in the film 'King Ralph'.

2001: The interior and exterior were used again as Misselthwaite Manor in the movie 'Back to the Secret Garden'.

2002: The salon appeared in the film 'The Four Feathers' starring Heath Ledger.

2004: Used in Agatha Christie's Marple as Rutherford Hall in the episode "4:50 From Paddington".

2010–2015: The main setting for the British television period drama 'Downton Abbey'. The Tatler referred to the area around Highclere as "Downtonia". The great hall, dining room, library, music room, drawing room, saloon and several of the bedrooms were used for filming.

2018: Used for the film adaptation of 'Downton Abbey', scheduled for release in 2019

Today, Lord and Lady Carnarvon still live at Highclere several months of the year. They return to their cottage when the castle is open to the public.

Lady Fiona Carnarvon writes extensively about life at Highclere in her beautiful blog you can find here.