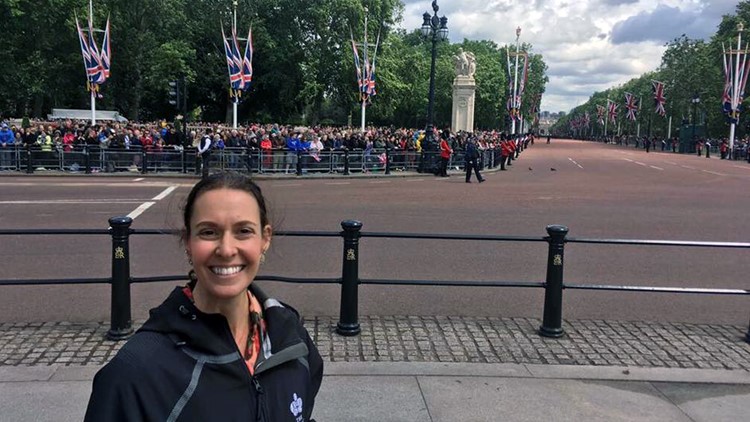 This St. Louisan in London has a job that'll make most Brits jealous

LONDON, UK — For the last two years Kristen Mueller has lived in London. She grew up in St. Louis and moved to England when her husband was offered an opportunity.

“He didn’t really have to twist my arm to come along,” said Mueller. “It was a great opportunity for us to live in another country and explore another culture.”

So, Mueller and her husband packed up their lives - including their English bulldog Portia (a rescue from St. Louis English Bulldog Rescue) - and moved across the pond.

Kristen took this picture of her husband and her English bulldog as they were on the plane flying to their new home.
Kristen Mueller

She says now that they’ve been there for a couple years, she feels right at home.

“There’s so much going on, so multi-cultural. It’s different from St. Louis, mainly in its size, but the people are so kind,” she said. “They all love a good chat, and it’s really easy to feel at home. So, we’ve been having a great time.”

READ MORE: A little slice of London in the Lou

“There’s an enormous amount of pride among the staff, that we’re entrusted to care for these green spaces that have such a rich, rich history in London.”

Most recently, Mueller was part of a team that worked Trooping the Colour. Stationed just outside Buckingham Palace, she had a front-row spot that would make royal watchers around the world envious.

Kristen poses with a colleague outside of Buckingham Palace during Trooping the Colour.
Kristen Mueller

Not only was she able to be part of this event, she also managed to get pictures of Meghan and Harry as they rode past in a carriage. She also saw Queen Elizabeth and got a great shot of the entire family standing on the balcony.

Kristen captured this picture of Meghan, Harry, Kate and Camilla passing her in a carriage.
Kristen Mueller
Kristen had a front-row spot to watch as the royal family stepped out onto the balcony during Trooping the Colour.
Kristen Mueller

Her time working Trooping the Colour taught her a sweet nickname for Queen Elizabeth that many of the locals use: Queenie.

“I think because the day is all about people showing their affection for her, everyone was calling her Queenie all day long. The police, my colleagues who are mainly British, the spectators – I had never heard that nickname before, but it was such a sweet little name for them to be calling her,” said Mueller.

Kristen managed to get a picture of Queen Elizabeth as she rode in the Scottish State Coach.
Kristen Mueller

But formal occasions such as Trooping the Colour aren’t the only major events she's worked. Her first assignment was to manage the media after the Duchess of Cambridge gave birth to her third child, Prince Louis.

“When I was working press for the birth of Kate and William’s third child, I did have locals coming up to me saying, ‘Why are you out here? You’re an American.’ And I said, ‘To be honest, I don’t know.’ I mean, it was like a pinch me moment,” she said.

So, how does an American woman prepare for such a monumental first assignment?

“I did a crash course, basically, watching 'The Crown' on Netflix to get caught up on the history and the family dynamics,” laughed Mueller. “It’s really surreal to have a job that’s so intertwined with the monarchy.”

Mueller said she and her husband aren’t sure how long they’ll live in London, but she’s having a great time living in a place that’s so welcoming and working for what she called “a dream job.”

Brandie Piper and Kay Quinn interviewed Mueller about her experiences during this week's episode of their podcast, Royal Dish. You can listen to the interview in the player below or by clicking here.