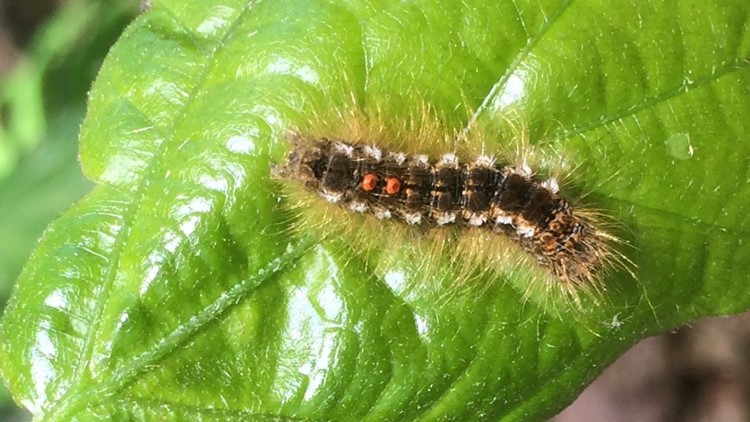 Photo by: AP
In a May 2016 photo provided by the Maine Forest Service, browntail caterpillars feed in Maine. The caterpillars’ hairs can cause a painful rash in humans. State scientists say it’s difficult to control the spread of the bugs, which has been aided by dry weather. (Maine Forest Servic ACFvia AP)

KANSAS CITY, Mo. — A recent study indicates that climate change could threaten hundreds of insect species in Missouri that may not recover after they die during extreme weather conditions.

A 2019 study by the University of Missouri at St. Louis examined 250 insect species whose populations plummeted after mid-spring frosts and summer droughts, decreasing as much as 95% for some species. The study, published in the science journal Frontiers focused on insects that eat the leaves of white oak and black oak trees in Missouri. The findings concluded that cold periods in the spring could hurt caterpillars by disrupting their metabolism and killing off the young oak leaves they consume, KCUR-FM reported.

"These kinds of events actually will eventually show a long-term decline of insect populations in Missouri," Marquis said.

Researchers found that mid-spring frost events between 1991 and 2011 insects' populations climbed back up within a couple of years. They also concluded that it took up to five years or many insect populations at Cuivre River State Park in northeast Missouri to climb back up to normal levels after the 2012 summer drought.

"These were all relatively abundant before the 2012 drought, so it's surprising that we don't see them anymore," Marquis said. "They're probably still there, but in such low abundance we just don't see them in our sampling, or it's possible they have gone extinct locally."

Marquis noted that more research is needed to determine how climate change will affect insects in Missouri in the coming decades. He said he plans to study how insect species in southern Missouri have dealt with mid-spring frosts in recent years.