Rare Mercury transit happens Monday; When to watch and how to protect your eyes

Transits happen only a few times per century and provide a unique opportunity to see a planet glide across the face of the sun. 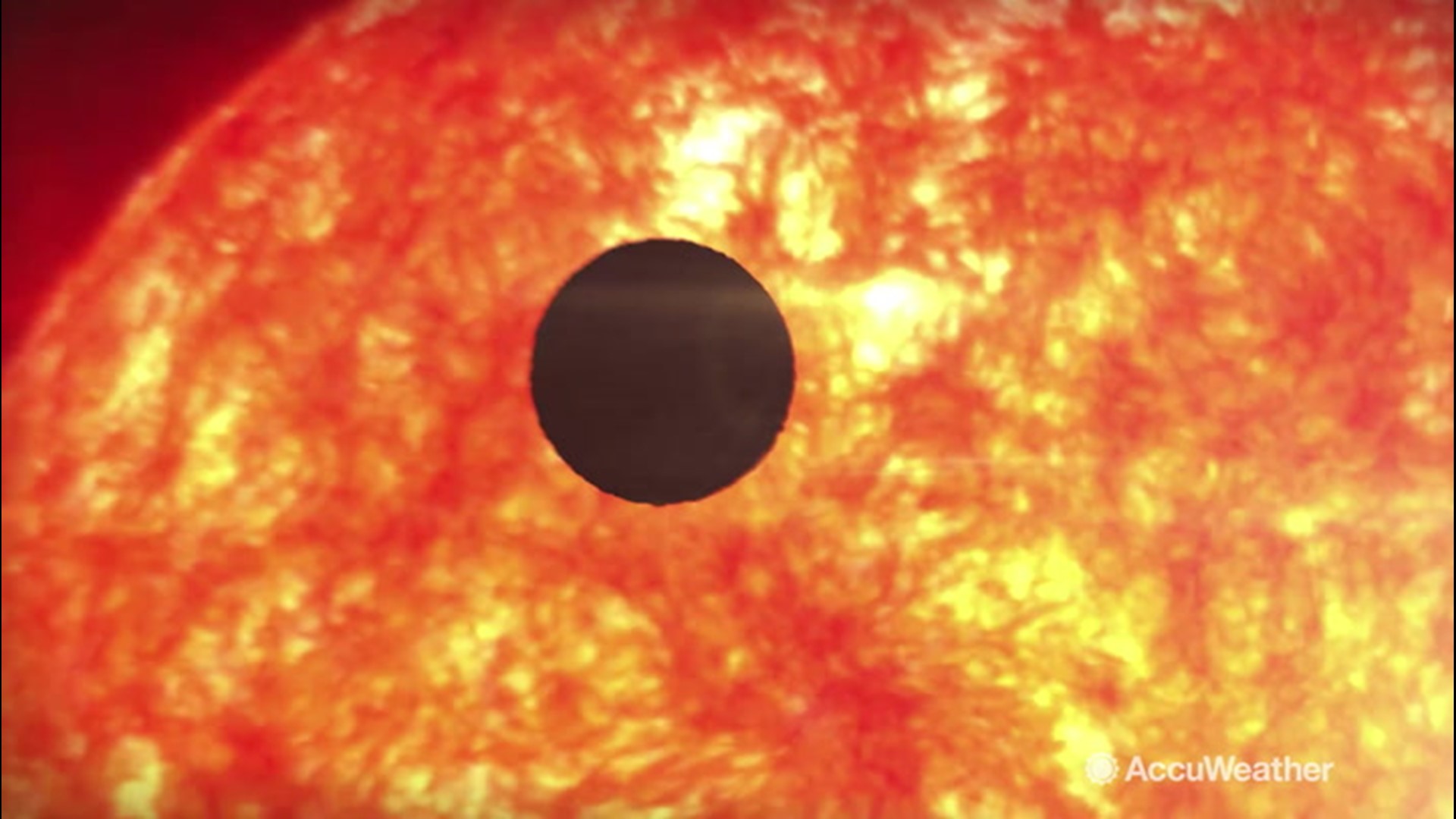 One of the biggest astronomy events of the year will take place Monday. It's an event so rare that it won't happen again until 2032.

People across North America, South America, Europe, Africa and western Asia will be able to see Mercury pass directly between the Earth and the sun in an astronomical alignment known as a transit.

Transits happen only a few times per century and provide a unique opportunity to see a planet glide across the face of the sun.

People will have a few hours to observe the event, which starts at 7:35 a.m. EST and lasts until 1:04 p.m. EST. That means for people in the western time zones, the transit will already be underway when the sun comes up.

RELATED: This old NASA photo of the sun looking like a flaming jack-o'-lantern is perfect for Halloween week

RELATED: Will all 8 planets in our solar system ever perfectly align?

Below, the planet Mercury is seen in silhouette, lower left, as it transits across the face of the sun Monday, May 9, 2016. The last time it happened was 2006. (Bill Ingalls/NASA via AP) Similar to a total solar eclipse, spectators will need a solar filter to shield their eyes from the harmful rays from the sun. Looking at the sun without a solar filter can lead to permanent eye damage and, in some cases, blindness.

However, onlookers will need more than just a solar filter to see the Mercury transit.

"Because Mercury is so small from our perspective on Earth, you'll need binoculars or a telescope with a Sun filter to see it," NASA said.

It is imperative to have a certified solar filter on the part of the telescope where light enters. Wearing solar filters, such as solar eclipse glasses, and looking into the eyepiece of a telescope that is not outfitted with a filter of its own can still lead to irreversible eye damage.

The American Astronomical Society (AAS) says that the filters should comply with the ISO 12312-2 international safety standard. This number should appear with the filter's original packaging or on the filter itself.

"Filters that are ISO 12312-2 compliant not only reduce visible sunlight to safe and comfortable levels but also block solar UV and IR radiation," the AAS explained on their website.

People will need not only the right equipment to see the Mercury transit but also cloud-free weather.

The best viewing conditions will be across the central and southwestern United States where clear skies will lead to an uninterrupted field of vision.

Meanwhile, disruptive clouds may obscure the sun across much of the Pacific Northwest, Deep South and East Coast.

People that cannot see the Mercury transit for themselves due to poor weather can watch the event live on AccuWeather.com. Folks that miss Monday's event will have to wait more than a decade for the next opportunity to see a Mercury transit, with the next one taking place on Nov. 13, 2032.

There is an even longer wait for the next Venus transit, which is sometimes referred to as a "twice in a lifetime event."

Related video: Top astronomy events for the month of November 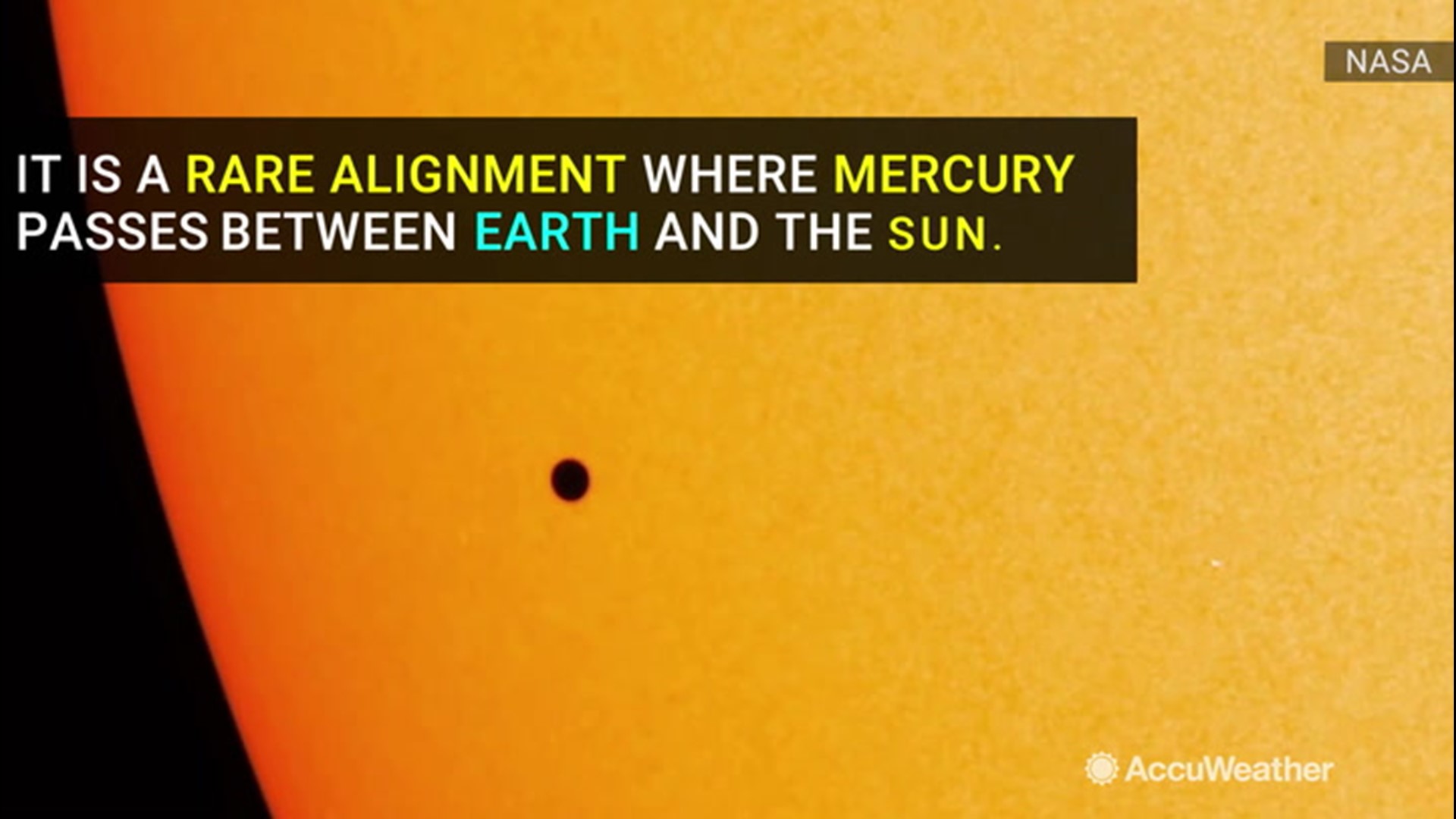 TEGNA contributed to this report.