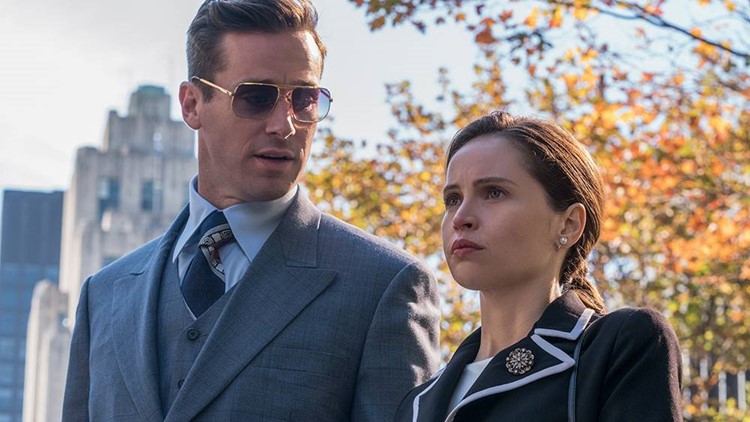 'On the Basis of Sex' follows the biopic playbook, falling short of greatness

It was Subway or nothing.

Last night, in a rush for food before closing time brought on the Taco Bell Heartbreak Ridge Blues plank walk for my colon, I got a sandwich at the popular chain restaurant. A footlong chicken breast on wheat with all the trimmings, but no sauce. I was so hungry I could have squeezed a couple mustard packets onto a napkin while standing in the waiting line and devoured them. I ate the sandwich, didn't get a stomach ache afterwards, but was left wanting more.

The same can be said for Mimi Leder's new Ruth Bader Ginsburg biopic, On the Basis of Sex. It was fine, had a few powerful moments, but overall was a paint-by-numbers look at the woman's historic career. It'd be like getting a book on her life with pictures included, and skimming through it while you enjoyed a latte at Starbucks. The effect would be satisfactory, but nowhere near the impact the true story suggested.

You see, back in 1956, when Ginsburg scrolled into law school with only a handful other women against a majority of men, the odds were largely not in her favor. Into the 1970's, as Ginsburg tried cases against everyone's suggestion, no one wanted to give her the time of day or any true power. She had to earn it, building her reputation brick-by-brick, rewriting laws that were as outdated as the wallpaper in my kitchen. All she did was barge her way into the Supreme Court, demand equality, ask for discrimination to die a quick death, and become a Supreme Court judge herself.

With no disrespect to Felicity Jones, a capable actress who does everything one can do with Daniel Stiepleman's script, I didn't leave this film feeling overly empowered or wanting to champion women's rights. I felt like I had watched a very long infomercial with some great looking actors and elaborate set pieces.

Leder and company gave it the college try, but in the end, I kept thinking about putting on the powerful documentary from earlier this year, RBG. A film that played at the local Tivoli theater for months. Every time I walked into the place to screen a new film, there was that unbreakable documentary sitting in the big theater. It simply wouldn't leave theaters without a fight, just like its immovable subject/protagonist.

Sometimes, a documentary is more worthy than the film. People will argue over a Queen documentary with the real Freddie Mercury or the Rami Malek-powered make-believe version. Later this year, when people stroll into Mr. Rodgers' neighborhood with Tom Hanks sitting on the chair, there will be comparisons to Morgan Neville's Won't You Be My Neighbor. It's the oldest battle in the land of nonfiction. A book or the film?

When it comes to Ruth's story, the documentary wins here, and it's not even close. But what about watching both? Sure, but if time is money, I'd only pick one. It isn't like Justin Theroux's look here is off-putting or I kept thinking about Charlie Skinner from Aaron Sorkin's Newsroom when I saw Sam Waterson-but it all looked like actors playing dress up instead of a true and honest interpretation. That's the reality, but it shouldn't be so noticeable. There's a soulful surprise at the end, but it's too little at that point to substantiate a great film.

No, the fact that I don't think this movie works entirely isn't based entirely on the casting of Armie "bland as lamb" Hammer. A bag of hammers could have done better playing Martin Ginsburg, but that's not the missing element here. It's simply hard to ignore the sound of boxes being checked on the biopic checklist as the movie is playing. Problem, the outlining of victory, struggle, family trouble, setback, advance, setback, disbelief, doubt, and A BIG SPEECH!! Yawn.

Is it a good movie? Yes and no. If you are in dire need of a film adaptation about Ginsburg's life, Leder and Jones did the best they could. Is there a better version out there to be made? You could argue for it, but I am not quite sure. In the end, this movie is like a Subway sandwich. It's appetizing when starving for some food, but there is much better out there.

If you know St. Louis sandwich shops, RBG is the Blues City Deli and Mom's Deli to On the Basis of Sex's commercial Subway.

That's all I got. Take it or leave it.