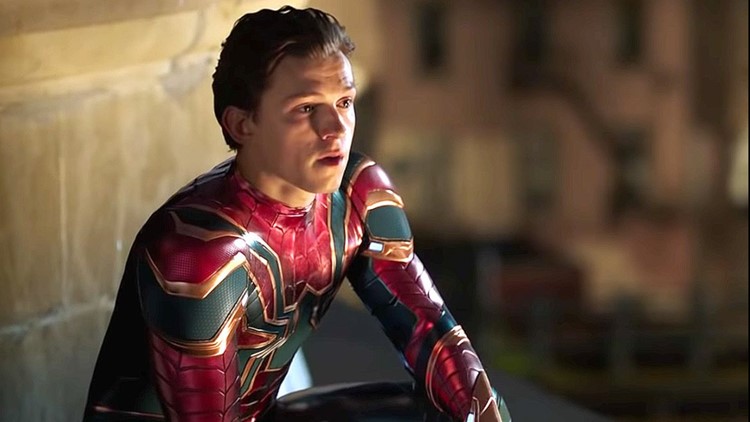 Review | 'Spider-Man: Far From Home' is a satisfying and clever Marvel finale

ST. LOUIS — All Peter Parker (Tom Holland) wants to do is live a normal life, but after four films and multiple death-defying adventures, that reality is becoming more and more of a dream. Still, as the latest film and last in the current Marvel Cinematic Universe Phase, “Spider-Man: Far From Home” begins, the hope is still there for normalcy.

Dealing with the aftershocks of Endgame and losing his mentor, Tony Stark, Parker isn't just another kid wanting to go on a school trip to Europe to flirt with the girl (Zendaya's MJ), but a teenage superhero grappling with responsibilities above his age grade. The world wants to know who to call when danger strikes, and Parker doesn't have an answer for them.

It is these world-weary issues that attach a level of pathos to an adventure film. This is what I like to call the Marvel method: fun and depth mixed into one cohesive force. Director Jon Watts, who directed "Spider-Man: Homecoming" with panache and confidence, lends that heightened spirited teenage angst to this film, which sends Parker on a whole new adventure.

The plot details are something I prefer not to get into in order to preserve the integrity of the virgin moviegoer wishing to go into this film with a clean conscience. Let's just say Samuel L. Jackson's not-too-old for this stuff yet Nick Fury summons Parker for a mission, and the newly arrived Mysterio (Jake Gyllenhaal) is involved. Happy Hogan (Jon Favreau), Aunt May (Marisa Tomei), and the lovable Ned (Jacob Batalon) are also back. The fate of the world hangs in the balance, stuff blows up, and a few webs are slung around the globe.

The key ingredient of Watts' films is the feel they apply to the proceedings. The childlike sensibility of Chris McKenna and Erik Sommers script recalls a John Hughes film, which never allows the overzealous action to get the upper hand in this film. Much of the film focuses on Parker's inner-grappling with his new role as a surviving Avenger and his potentially budding romance with MJ, who he stands up more times than any man ever should. A lot of “Far From Home” is Holland's earnest hero trying to decide if he has what it takes, which makes the film endearing as well as entertaining.

There are several solid and well-timed callbacks to Robert Downey Jr.'s departed hero, especially an early laugh-out-loud moment with Parker's school in mourning that involves Whitney Houston of all people. Favreau, the priceless supporter with the expert comedic timing, delivers a somber roar speech to Parker midway about his "best friend" that really hit the right notes. After all, Parker was Stark's protege and the closest thing he had to a son. I like that Watts, McKenna, and Sommers keep him in mind here, draping him over the movie like a red blanket would hover over a lamp.

The imagery and cinematography of “Far From Home” is superb, which isn't a hard job to pull off when you are bolstered by the likes of Venice and Prague. Most of the film is set abroad, and it soaks the action into the well-known landmarks. There were times when I felt like I was looking at a travel guide that was written like a comic book, which was cool and much-needed. After all, what you are seeing something that once lived in a guy named Stan's head.

Holland has eased into the role with every film, and "Far From Home" shows you a fully locked in Spider-Man. In my eyes, he's the complete package. Unlike previous players like Tobey Maguire and Andrew Garfield, Holland plays both parts well, being equipped for the acrobatics of Spidey's exploits while nailing the heartfelt beats with Ned and MJ. It's a role that audiences will grow up with Holland as he evolves in the role. By the way, I am really impressed with Zendaya. She's no damsel in distress, or a true fighter. The actress just keeps you invested, and her work on HBO's Euphoria makes a strong case for her versatility.

Favreau and Jackson, who was shafted (no pun intended) in Endgame, have expanded roles here and thrive in them. Fury has always been the old professor who can see the future but doesn't care to express what it means to his class of Avengers. Favreau, who got more time in "Homecoming" as well, has wonderful chemistry with Holland in their scenes together. A couple guys reeling from something who simply have no time to mourn, only a world to save and preserve.

I'll be honest and admit the moment I saw Gyllenhaal in the trailer dressed in costume, I laughed a bit more than I should, but after the film finished, I can see why Watts wanted him for the role. The actor can play so many speeds without slowing down or missing a beat, so you needed someone who could handle the shuffling deck. There's more to Mysterio/Quentin Beck than the first impression, and Gyllenhaal is up to the task.

Is “Far From Home” better than “Homecoming?” I'd say no. I liked Michael Keaton's adversary a great deal, due to the combination of malice and true working man's guilt that he invested in the role. The villain in the new film is good, but not as good. The missing presence of Downey Jr. deflates some air from this latest venture. What can I say? The players here are solid, but Homecoming was something else. I loved that film more every time I watched it. This one can grow on me, perhaps after another watch.

However, “Far From Home” is a clever and fun ride. It satisfies the appetite of Marvel fans and cashes the check that its trailer wrote months ago. One of the things I love the most about the MCU is the way it constantly weaves in the earlier films in its run, like a baker tossing a few extra ingredients into the bowl of dough. The callbacks to earlier films always serve the current one well, and here, you'll be surprised where Watts and company pull from in the Marvel deck. With a catalog as rich as this 22-film deck, why not?

At the end of the day, “Spider-Man: Far From Home” is satisfying and a breezy time at the movies (once again, praise the editing), but it wisely keeps its focus on who Peter Parker is. It never veers too far from the sensibility of the primary character and his source material. The kid wants to know love is, and feels like, but will the job title ever allow him? We shall see.

Thanks for a heck of a run, Kevin Feige. What do you have in store next?

P.S.-Yes, there is an end credits scene, so stick around.